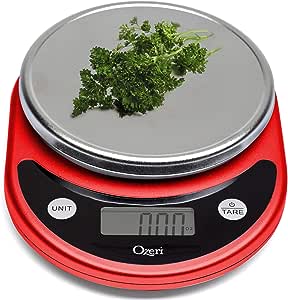 Proudly selected by the Dana Farber Cancer Institute for a Harvard Medical School study on the link between weight loss and the prevention of breast cancer, the new Pronto Digital Kitchen Scale by Ozeri is an uncompromising multifunction scale for the kitchen and home. The Pronto is built with the latest generation in sensor technology to ensure an accurate and immediate response for the fast-paced chef, and features a newly enlarged weighing platform - one of the largest in its class, to accommodate larger bowls and food items. Elegantly designed with a refined finish, the Pronto also doubles as a postage machine for your mail or a scale for your children's science projects.  The ultimate companion for the serious cook, the Pronto's large Unit button lets you change the unit of measurement with push-button ease, with 5 different units to choose from (g, lbs, lbs:oz, oz, ml) - e.g. convert (539.8 grams) to (1.19 pounds) to (1 pound 3 ounces) to (19.04 ounces) to (539.8 ml). The widescreen LCD displays provides wide viewing angle for the fast moving chef.  Manufactured to rigorous quality specifications, the Pronto weighs up to 11.24 pounds (5100 grams) in graduations of just 0.05 ounces (1 gram) to help you achieve your diet and weight goals. The Pronto also features an ever handy Tare button which automatically subtracts the weight of any bowl or container to calculate the net weight of your ingredients. The Pronto's Tare and Unit buttons provide an audible and tactile click confirmation so you never have to push twice when preparing meals in a hurry. The Pronto's aesthetic design and availability in multiple colors complement any kitchen decor, and it cleans quickly and stores easily. The Pronto runs on 2 AAA batteries (included) with an easy-access battery compartment, and 2-minute automatic power-off to preserve battery life. It also ships with a bonus set of batteries, and is guaranteed by Ozeri's No-Hassle Warranty.

4.8 out of 5 stars
4.8 out of 5
9 customer ratings
How are ratings calculated?
To calculate the overall star rating and percentage breakdown by star, we do not use a simple average. Instead, our system considers things like how recent a review is and if the reviewer bought the item on Amazon. It also analyses reviews to verify trustworthiness.

J. Walton
5.0 out of 5 stars Small food scale that can work within two decimal points...
11 February 2018 - Published on Amazon.com
Colour Name: BlackVerified Purchase
I bake bread at least once every two weeks, sometimes a little more frequently based on consumption, and always got at least a little bit frustrated with the difference in the size of the loaves and boules. We have limited space in our kitchen, due to the size of it as a whole, so we put off buying a kitchen scale. After baking bread the last time around I decided that it was time to look to see if a scale could be found that would be small enough for storage, while still offering functionality to measure the weights as precise as possible. I looked at a few of the different scales available on Amazon and was definitely not interested in getting one that relies on a watch battery and also wanted one that didn't round the numbers up. This Ozeri Pronto has a small profile, uses two AAA batteries (which were included with the scale) and is precise within +/- 0.1%, based on the testing that another review for this product was able to determine.

Freshware CB-104RD 6-Cavity Mini Silicone Mold for Soap, Bread, Loaf, Muffin, Brownie, Cornbread, Cheesecake, Pudding, and More  and broke the other three into another six parts in total to bake with ham and cheese stuffed inside.
I noticed two aspects about this Ozeri food scale, which I don't see as an actual issue, but thought I'd mention. The first is that when I was changing the bread and the tare weight was zero it turned off in less than two minutes, as it felt like it took me about 30 seconds, but could've been a minute, between removing the one dough and had to stop before the other was almost placed on the scale. Basically, you'll want to make sure that any and/or all of the items that you plan on weighing are very much at the ready, otherwise you might need to turn it back on and set the tare up again. The other thing to note is that the ounces appear to change in increments of 0.03, which can make it almost impossible to get a truly precise measurement, but is still pretty close.
For the first time since baking homemade bread, all of the various loaves had basically the same pre-baked weight and came out looking approximately the same size too.

This Ozeri Pronto food scale works well and I look forward to using it for years to come. If you're in the market for a food scale to use while baking, then this is a good scale to purchase.

If you found this review "Helpful", please click the button below.

Danielle G.
1.0 out of 5 stars Scale malfunctioned after a couple of months
31 March 2018 - Published on Amazon.com
Colour Name: BlackVerified Purchase
I've had this scale for a couple of months now. I use it pretty much daily to measure out my food for tracking purposes. At first, the scale seemed to be working well. But within the last few weeks it has started giving me problems. I will place an item on the scale and tare it, and within a second or two the scale reading keeps fluctuating or jumping up and down by fractions of an ounce. I tried making sure that I had it set on a level surface (even though the surface I was using was the exact same one as from the beginning), trying several different surfaces. I tried it with different containers and items, in case my container was causing an issue. I'm really disappointed at the quality and (lack of) longevity of this scale.
Read more
438 people found this helpful

Lou Buono Jr
1.0 out of 5 stars Worked great until it stopped working
13 April 2020 - Published on Amazon.com
Colour Name: RedVerified Purchase
Worked great. Loved it. That only lasted two weeks. It broke after two weeks and is now useless. I left a negative review since there was no way to return it. Seller contacted me and asked me to remove review and he would refund me . He explained how he switched manufacturers because of continuing issues with the scales sold. He seemed genuine. I removed the review 9 days ago. I've seen no refund despite contacting him twice. So now he gets this review again. Not only is it a defective product, but it comes from a seller who doesn't hold up to his word.
Read more
177 people found this helpful

Kelly Strauch
1.0 out of 5 stars broke in less than three months of daily use
27 April 2020 - Published on Amazon.com
Colour Name: Teal BlueVerified Purchase
I bought this to weigh ground up coffee beans and have been using it daily. It worked great for a couple of months, then it all of a sudden started showing negative weight on the scale (one gram at a time) a few seconds after turning it on, and for as long as you leave it on. If you zero it out, it just does the same thing over again -- so you can't trust whatever it says when you actually start weighing something because it shows a lower number than it should. I tried switching out the batteries with brand new ones, but it still does the same thing.

Shame on me for not checking the reviews before buying -- I see now that I'm not the first one to have this issue with this scale.
Read more
199 people found this helpful
Go to Amazon.com to see all 18,561 reviews 4.5 out of 5 stars
Free & fast delivery, movies and more with Amazon Prime
Prime members enjoy free & fast delivery, exclusive access to movies, TV shows, games, and more.
> Get started
Back to top
Get to Know Us
Connect with Us
Make Money with Us
Let Us Help You
© 1996-2020, Amazon.com, Inc. or its affiliates