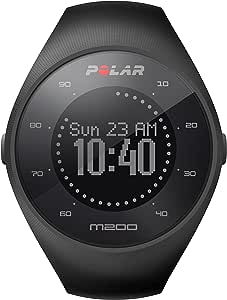 lex
3.0 out of 5 stars My 1st Polar product I did NOT like
20 March 2018 - Published on Amazon.com
Colour Name: BlackVerified Purchase
bought this product b/c i had a good experience with other Polar gadgets over almost 20 years...also, the wrist-based HRM seemed a neat feature compared to my Polar M400 chest band which often is uncomfortable to wear. anyways, since i owned both the M200 and M400 it was natural to compare the 2 during my regular exercise sessions. below are my unvarnished observations:

-setting up the watch was possible only via computer or a smart phone app. I did not find it well explained in the tiny instruction attached... not a big deal but the M400 does not suffer this.
-once set up, the watch performed as advertised...more or less.
-the 180mAh rechargeable battery appears to perform as advertised. I have a gadget that measures the recharged energy consumption. so, during a 1hour session with both the GPS and HRM on, the unit consumed 28mAh and during the 2h session - 56mAh. That is, it is easy to get the unit last 6-7 hours with all the 'loads'. incidentally, if the unit was used as a watch only, it consumed only 6-7 mAh per 24h, which should amount to an impressive couple of weeks.
-the HRM feature compared poorly with the M400 readings. i compiled total 10 sessions at a moderate aerobic pace (appr 120 bpm). even at this low rate, the differences in HR ave were sometimes over 20 bpm with M200 ALWAYS on a low side compared to M400. shaving my wrist shrunk the difference a little bit. the M200 seems to hang at some points as if it decided to boycott me...
-the GPS in both units is is based on the absolutely identical chips. i was therefore expecting NO significant differences...indeed, when moving around in the areas of good reception (along river, open fields etc) both units almost did not differ. HOWEVER, if used in the city like mid Manhattan, I never got the same reading out of the units. In fact, it seems the interpretation software in M200 (that is an approximation that kicks in when the signal lost) is more accurate in M200. I would observe about 5% inaccuracy in the very built up areas with tall buildings. it is a positive compared to the M400 frequent 20% over-reading.
-overall, even if the unit is considerably less expensive than the comparable garmin products, I found it too simplistic and stripped of many features found in such units as Amazfit bit etc. And for a lot less money to boot.

To summarize, while Polar makes good products and generally delivers on the advertised specs, I though my M200 was designed on the cheap side and is NOT representing a good value given the available alternatives. I will be returning it.
---
just decided to add b/c some people asked if it works with a HR chest strap. See my detailed answer in the right spot. Briefly - it DOES work with a POLAR blue tooth strap-mounted sensor.

Helen
2.0 out of 5 stars HR unusable, distance pretty good
25 July 2017 - Published on Amazon.com
Colour Name: RedVerified Purchase
Used it for a couple training sessions. Woefully inadequate.
Battery lasts barely 3 hours during gps/HR mode, which is really bad even at this price point.
HR is very picky, needs to be juuuust the right tightness to read accurately. Ran side by side comparison with a chest based HR and it took a good 20 minutes and plenty of fiddling before it stopped being off by more than 30 points. Once you get it juuust right, it's within 3 beats of chest strap consistently, so that's the only reason it got 2 stars instead of 1, because technically, you can get it to work eventually. But I threw my hands up after a treadmill session where after 30 minutes of adjusting, my HR was still off by about 40.
Distance readings within about 1-2% of expected, so that keeps it from getting 1 star as well, but the GPS must not update frequently enough for accurate pace readouts, as I would consistently get wild swings of up to 2 minutes per mile in either direction while keeping steady.
Summary: Battery bad, HR bad, Distance good, Pace fair.
Read more
16 people found this helpful

Pjammies
4.0 out of 5 stars Best Running Watch
1 July 2017 - Published on Amazon.com
Colour Name: RedVerified Purchase
I love my new M200. My Fitbit Surge broke after 3 years, and I was very upset at it's short lifespan.

When researching a Fitbit replacement, I was looking for waterproof, ability to change bands (surge lacked in style), GPS, and heart rate. The M200 has all of this and more!

My favorite feature is to create training plans. I do not even know I wanted it till my watch startes vibrating when I was not in the proper zone. It is a game changer. I really like that it warns you when you have been sitting to long. It gives you an inactivity stamp. Really cool motivator to get up.

The M200 is a perfect watch. It is simple to use, and the website and APP have a nice 'flow'.

The only improvements I would like to see is for the training plans to be editable I the app versus the website. Also, the screen doesn't light up when you look at it automatically. The surge use too. It's not a huge deal, because you can hit the right-side button and the backlight will turn on.
Read more

14 people found this helpful
Go to Amazon.com to see all 243 reviews 3.3 out of 5 stars
Free & fast delivery, movies and more with Amazon Prime
Prime members enjoy free & fast delivery, exclusive access to movies, TV shows, games, and more.
> Get started
Back to top
Get to Know Us
Connect with Us
Make Money with Us
Let Us Help You
© 1996-2020, Amazon.com, Inc. or its affiliates