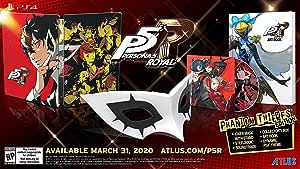 by SEGA
Platform : PlayStation 4
In stock.
FREE delivery: 21 - 26 Apr. Details
Ships from and sold by WorldWide Dealer, from outside Singapore. For information about products sold by international sellers, click here.

Prepare for an all-new RPG experience in Persona 5 Royal based in the universe of the award-winning series, Persona! Don the mask of Joker and join the Phantom Thieves of Hearts. Break free from the chains of modern society and stage grand heists to infiltrate the minds of the corrupt and make them change their ways! Persona 5 Royal is packed with new characters, confidants, story depth, new locations to explore, and a new grappling hook mechanic for stealthy access to new areas. With a new semester at Shujin Academy, get ready to strengthen your abilities in the metaverse and in your daily life. Persona 5 Royal presents a unique visual style and award nominated composer Shoji Meguro returns with an all-new soundtrack. Explore Tokyo, unlock new Personas, customize your own personal Thieves Den, discover a never-before-seen story arc, cutscenes, alternate endings, and more!

Steelbook case with game and dynamic theme code inside. Has plastic slip cover.

Now onto the review:

Basically a director's cut of Persona 5 with tons of additions and quality of life improvements and gameplay tweaks similar to Persona 4 Golden and Persona 3 FES. Makes Persona 5 (original) obsolete.

3. New characters:
Kasumi: Joins your party post game chapter. She does show up during the main game as if she was there all along in the original. Think Rin in the Catherine Full Body game

Jose: Guy who hangs out in the Thieves Den and helps you get collectables

5. Balance changes: confusion and status effect times are nerfed. You can't do burger challenge to get early stat boost at start of game

12. Able to take Justine and Caroline on dates

26. Will Seeds. Collectable item. Mainly obtained in room through grappling hook ability. When you find 3 Will Seeds in a palace you get a unique accessory. Picking up a Wii Seed will restore parties SP

27. Momentoes (randomized dungeons) is expanded.
Now has shop that sell exclusive items in exchange for 'flowers' which you find laying around
New stamp system. Collect stamps and trade them in for exp, money or more items
New side quests

29. Assist mechanic. Gives you recommendations on which confidant to visit and which stats to improve

32. If you have PS4 Pro there's a graphics enhancement mode

Overall, the core story is the same with addition of a new trimester chapter, side stories and activities; but there are tons of refined elements that makes the game more approachable than the first.

If you jumping into this for the first time it's a definite buy if you're into JRPGS. For those planning to replay it, fun to play through again with tons of additions. If you thought the original was meh then this one may be a pass as the core experience is the same just enhanced. For me it was worth the double dip.

Kanishka Ponnamperuma
5.0 out of 5 stars Amazing 10/10
1 April 2020 - Published on Amazon.com
Edition: Phantom Thieves EditionVerified Purchase
If anyone is contemplating on whether to buy this or the old Persona 5, I can wholeheartedly recommend this game as there is so much content and it has better visuals and performance if you have a PS4 Pro. I bought the Phantom Thieves Edition during the preorder time for $90 and I would say it's a bit steep but I like collecting the extra stuff that I get with it. But if you are just looking for the base game then go for it as it would provide you more than enough content to last you well above 100 hours of gameplay
Read more
7 people found this helpful

John Boyer
5.0 out of 5 stars Take Your Time
12 May 2020 - Published on Amazon.com
Edition: Phantom Thieves EditionVerified Purchase
Persona 5 Royal. One of the best games of this generation, into one of the best remakes of the generation. I'll go into what I mean since "remake" can be confusing with "remaster" getting thrown around a lot these days. If you're new to the Persona series, you should know that it's a spin off of Shin Megami Tensei, which is the 30ish years old darling from Atlus. While Persona initially had a niche audience starting on PlayStation in 1996, it rather quickly began selling better than all the other Shin Megami Tensei games or spin-offs (there's a few). After the success of Persona 3 & Persona 4, Atlus started to get the idea to make more branching or complete versions of them by adding more content & rereleasing them. Each time this happened, critics & fans thoroughly enjoyed the rereleased versions more. Persona 5 Royal was unveiled to much criticism from some fans, shockingly more frequent from the Japanese fandom. By far, Royal has brought more content than any other Persona rerelease. More confidants, characters, locations, cutscenes, mini games, locations, dialogue, mechanics, quality of life improvements, etc. On top of all that, there is an art collection for character models, exclusive art, a music player, even television trailers of original Persona 5. Diehard fans who bought the original may feel slighted if they put hundreds & hundreds of hours into the 2016/2017 version, but I truly cannot recommend this game enough for anyone who likes Persona or even if you've never heard of it. It's basically adult Pokémon, if Pokémon ever had a good storyline. Don't even get me STARTED on the special edition stuff. I'm so happy I finally have a CD of Persona music, it rips so hard. Love the art, love this mask, LOVE this game.
Read more
4 people found this helpful

Phoenix
5.0 out of 5 stars This game will change your life
15 May 2020 - Published on Amazon.com
Edition: Phantom Thieves EditionVerified Purchase
As someone who played Persona 5 four times, this Royal variation is still worth playing. There’s a lot of quality of life changes as well as more activities, ways to boost your social links and a whole second semester paired with two new confidants. It’s an entirely different game than Persona 5. Plus the thieves den is really cool. I couldn’t ask for a more immersive game during this quarantine. If you’ve never played definitely buy this one over the original. If you already played and really loved the first one, it’s worth buying. For those who haven’t played, this game seriously changed my life. I’ve never had a game reach down into my soul and stir me quite like persona 5 has. It may sound weird but this game will help you grow in ways you didn’t think possible from a video game. One of my all time favorites. For me it’s #1, or tied at #1 with The Witcher 3. On another note, the mask is high quality with an awesome stand; the art book is high quality and is substantial.. not like the Persona dancing endless night collection art book, that one was disappointing. I really liked the Royal theme included, as well as the collectors box. It’s a real high quality box and not just packaging meant for the trash. The steelbook is gorgeous as well, the color theme is great; I think it looks better than the original steelbook as well as being more detailed. Take a chance and get this game, you will not be disappointed.
Read more
2 people found this helpful
Go to Amazon.com to see all 126 reviews 4.7 out of 5 stars
Back to top
Get to Know Us
Connect with Us
Make Money with Us
Let Us Help You
© 1996-2021, Amazon.com, Inc. or its affiliates