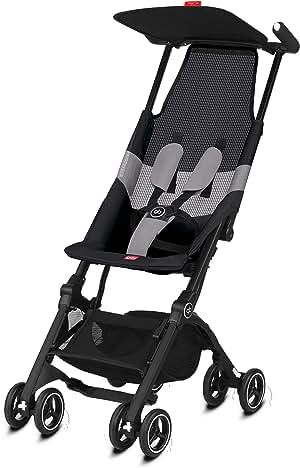 Colour: Velvet Black | Style: Pockit Air
Technical Details
Additional Information
Feedback
Would you like to tell us about a lower price?

The Pocket Air All-Terrain is an absolute travel essential, providing total convenience without compromising on comfort or style. Whether you're on holidays, exploring the latest urban hotspot, or simply on the move, the Pocket Air All-Terrain is perfectly in tune with the needs of modern parents. The double wheels of the Pocket Air All-Terrain were cleverly designed to allow parents to confidently man oeuvre on different surfaces throughout their day. Boasting breathable mesh fabric, your child will keep cool even on the hottest days, while a super lightweight design makes strolling an absolute breeze. And for when it's time to fly, the unique ultra-compact folding mechanism reduces the stroller to a size that is airplane hand luggage compliant-making it perfect for exploring new places, near or far.

Wei Wei
2.0 out of 5 stars Not brand new / unused
13 December 2019
Colour: Night BlueStyle: Pockt+ All-TerrainVerified Purchase
Finally received the troller after a long wait, however i guess i received a returned set instead of brand new. There is a scratched on the frame and the there is traces of rolling on the wheels :(
Read more

Urduja
3.0 out of 5 starsit is nice to have the reclining feature
24 April 2018 - Published on Amazon.com
Verified Purchase
I have the original Pockit and now bought this Pockit+.
I put quite a bit of travel on the original and it is still holding strong, but when the little guy (3 years old) naps, it is nice to have the reclining feature.
We do quite a bit of traveling (at least once a month on an airplane, and at least once a year out of country)
Places we have gone with this stroller and original have been numerous states including Alaska; out of country to Canada, Mexico, Bahamas, Caribbean, Italy, Greece and Israel.

Pros:
-Reclines.
-It held up on cobbled streets in Europe (a bit tricky, but we survived
-Extremely packable

Cons (in comparison with the original):
-Doesn't seem to be as sturdy. Somehow this one seems to be a bit more 'wiggly' than the original
-Wheel lock does not work as well, you really have to make sure the lock is all the way down. I had some roll away issues. I did not have similar issues with the original
-Recliner system. This is about the system itself. There is a strap in the back that you cinch tight to have it in upright mode and un-cinch to give a slight recline. The cinching system is not very tight, so it would slowly slide back. I used a little S biner to keep it cinched tight and then cliped the strap to the side of the stroller. This may not make sense until you see the stroller for yourself. I will try to add pictures.

Opinion:
-The umbrella cover is nice, but did not really make a difference to me. Actually, when in recline, the side gaps are still significant enough that you would still need to use a light blanket draped over the umbrella to cover your bubs. In the original I would just use a muslin type blanket draped over the square cover and it worked to keep the little one out of the sunlight and also gave some napping privacy. The 'upgraded' cover only works well when in upright position.
-It folds about the same, slightly bulkier, but to be expected by the upgrades

Conclusion:
If you really need something that reclines and can pack really small, this MIGHT be worth it for you, but there are other good small strollers out there for a better price and with better features.
If the reclining feature is not all that important to you, and you just want the small travel stroller, then the original may be a better option. I used the original for the last 2 years before getting this one and we did just fine.
Knowing what I know now, would I have bought it? Possibly... but most likely I would have just stayed with the original...
Random tips:
Those tactical backpacks fit the stroller perfectly with room to spare for baby essentials
I've also gone the minimal way using removable backpack straps
Read more
418 people found this helpful.

Sara Ferguson
5.0 out of 5 starsCompact, versatile and cute!
15 April 2018 - Published on Amazon.com
Verified Purchase
Love! I bought this stroller because I couldn’t get enough of the fold. I have been a bit of a stroller connoisseur ... I’ve owned dozens and dozens over the years. From the cheapest umbrella strollers to $1000 doubles with all the bells and whistles.

I saw many videos and reviews of the original Pockit stroller ... I ogled over it ... just how catchy and cute that little fold was! Was the stroller practical for me? No. I didn’t travel, I was about to have a newborn, and I already was pretty stashed up on strollers. I also couldn’t get over the ‘Sun Shade’ as GB so nicely put it on the Pockit. So, I sadly went without and went on with my life.

Then I saw a video from a mama blogger, GB was debuting the Pockit+! It now had an actual canopy AND a recline! I was past the need for infant seat attachment as I had moved my moose child up to a convertible car seat ... but it also now included Cybex car seat compatibility. SLIGHTLY larger fold ... but my goodness was it still tiny.

I jumped on it! And man am I ever so glad I did ! It can fit in the bottom of my Bob Duallie basket with room to spare. It can even fit in the basket of my Sit and Stand (with a little help unsnapping from the frame first and back together)

It sits in the back of my van and it’s like there’s nothing there. Even when I used to keep my City Mini in there I almost had no room for groceries ... I can even put it in my stow and go area under my floorboards.

I purchased it in hopes of using it as a supplement to our double strollers for when my almost 5 year old (pictured in the stroller) would rather stroll instead of walk (We’re looking at you upcoming Disney trip) and as a single stroller for my 10 month old when I need it for quick trips such as preschool drop off of the store.

I love it. It’s great. If you are planning on using it on smooth ground, pavement or indoors it’s great. It’s not an all terrain stroller so don’t be hoping for one and you’re fine. Also, those videos of the GB folks folding and unfolding these things in 5 seconds? I think they might actually be wizards. It’s not hard when you get used to it, but I still have no idea how to get it open without prying it open. So, don’t go into it thinking you will just pop it open and you won’t be disappointed. ;)

Hope you decide to give this stroller a try and enjoy it as much as we do!
Read more
211 people found this helpful.
Go to Amazon.com to see all 1,191 reviews 4.2 out of 5 stars
Free & fast delivery, movies and more with Amazon Prime
Prime members enjoy free & fast delivery, exclusive access to movies, TV shows, games, and more.
> Get started
Back to top
Get to Know Us
Connect with Us
Make Money with Us
Let Us Help You
© 1996-2020, Amazon.com, Inc. or its affiliates