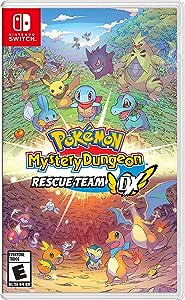 by Nintendo
Platform : Nintendo Switch
5.0 out of 5 stars 1 rating
In stock.
Ships from and sold by Amazon SG.

You can meet and recruit Pokémon in a dungeon-crawling adventure within their world! Build a rescue team to take on mysterious, changing dungeons and strategically plan your moves as you venture forth to make the Pokémon world a safer place…and uncover your true purpose along the way. As you recruit Pokémon, these trusty teammates will need somewhere to stay, so build camps to house, manage, and strengthen your Pokémon friends. Think hard about who is right for the job and how to approach each mysterious dungeon as you prepare a rescue team. You'll move a single square at a time or use Auto mode to speed up movement until you engage other Pokémon in turn-based battles—but don't forget about Pokémon strengths and weaknesses! This version adds gorgeous watercolor-inspired graphics, and more! Get comfortable in being a Pokémon, there's a lot of work to do.

Vince
5.0 out of 5 starsA wonderful remake to a Gameboy/DS classic
10 March 2020 - Published on Amazon.com
Verified Purchase
First off, Blue Rescue team was my first ever video game back in 2007. Having that out of the way, this being the remake has lived up to my expectations and more. I’m not very far in this one yet, only just beat Zapdos, but it is both very similar and very different to the originals.

The music is super nostalgic. It’s much like the originals but with an added “pop”. I don’t know how they took the originals and made them better, but they did.

The sprites are very nice. A couple of tiny complaints include Eevee’s run cycle and Ekans in general. I adore most other sprites.

I also like the added dialogue and animations. Absol was one of my favorites in the original and I’ve heard that he’s been given additional dialogue. Also, all of Zapdos’s animations were superb.

I would highly recommend this game to new and old mystery dungeon fans alike. I had high hopes for this, as I was very disappointed in SWSH. I can 100% say this remake has surpassed my expectations and I do not regret buying it.

Brooke Peters
5.0 out of 5 starsHighly recommend this game
8 March 2020 - Published on Amazon.com
Verified Purchase
Love this game! Good storyline, challenging, and (best part for me) you still get the freedom to make your own choices and come up with your own strategy. Much harder and different gameplay than the other pokemon games, but you get countless hours of fun out of it. Plus, there is some beautiful artwork/scenery in this game.
Read more
18 people found this helpful.

Savannah h.
4.0 out of 5 starsWhat happened to the Pokémon camps?
10 March 2020 - Published on Amazon.com
Verified Purchase
I love the Pokémon mystery dungeon growing up and I was extremely excited to play this one that came out. Love everything but the Pokémon camps, I was very disappointed in the other Pokémon dungeon games you could go to each camp and explore the camp itself and interact with all the Pokémon. In this game it’s just a pc like feeling very pixelated. It’s a great game over all I preordered and already beat the game though the Pokémon camps might break or make it for some people.
Read more
13 people found this helpful.

KRTL
5.0 out of 5 starsAmazing Refresh of the Classic!!!
10 March 2020 - Published on Amazon.com
Verified Purchase
This game is truly amazing! As mentioned elsewhere, this is a remake and update from the original Pokemon Mystery Dungeon Blue/Red Rescue Team. The mechanics have been updated so that your partner Pokemon are smarter than the original game (they avoid traps, actually help you defeat enemies, pick up items, use items appropriately, etc). Also, some minor in town improvements help to add a modern mechanic and feel to the game while still staying true to the original feel and gameplay. The art is amazing! It appears as if everything was hand drawn and crafted in detail. If you observe the movements of the Pokemon, the cut scenes, and in town detail, the graphic designers put a lot of effort into them to make them realistic while maintaining the style of hand drawn art and the original game. For example, if you observe Pidgey and its evolution chain, you can see its wings flap and move realistically (within the context of it being hand drawn). If you are a fan of the original, this game is perfect for you, or if you are a Pokemon fan or want to experience a dungeon crawler, then this game is great! Items from later games have been added so there are a greater number of items to collect and fairy types have been added.

One disappointment is that, while the Pokemon are smarter (both partner and foe) the partner Pokemon still lack some practicality. For example, I had recruited a few Pokemon in an early dungeon, and I lead my team through a hallway. However, an enemy entered the room that still contained a couple of my teammates. Even though the game added the element that your team actually follows the leader (which is great) and does not engage in every single battle, the enemy Pokemon began to use distance attacks against my team. The Pokemon that it was hitting did not move or try to get out of the way. It just stood there and fainted. So, even though the AI has improved drastically since the first games that these are based off of, it still falls a tiny bit short in this area and a few others.

However, those points are minor and the game is great and is a very well done update/refresh on a classic that still maintains the integrity of the classic while adding many small modern features that take advantage of the updates of computers. Definitely one to buy, and I hope they come out with similar updated games for one or more of the rest of the Pokemon Mystery Dungeon series!
Read more
9 people found this helpful.

AsDfGuy
5.0 out of 5 starsGreat game for when you want to just chill!
24 March 2020 - Published on Amazon.com
Verified Purchase
I’ve heard it said plenty of times: You’ll only like this game if you’re into roguelikes.

I personally don’t have an interest in the “roguelike” subgenre, apart from The Binding of Isaac. But here I am enjoying this game. Sure, it’s not your traditional Pokémon game. That’s fine.

Why I love this game:

- It’s super chill. Great for turning your brain off after a long day at work.

- The artstyle and music give it a very whimsical feel.

- Despite the cheesy dialogue, the game is very immersive and you feel like you’re there.

- The game doesn’t take itself too seriously. It kinda feels like you’re in a Saturday morning cartoon of yore.

But that’s just me. If you’re on the fence due to the game being a “roguelike,” I strongly recommend you try the free demo first. The save data from the demo can carry over to the full game should you decide to purchase it.
Read more
5 people found this helpful.
Go to Amazon.com to see all 83 reviews 4.5 out of 5 stars