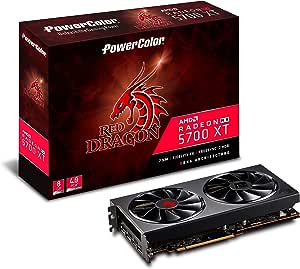 XC4LY3UR
1.0 out of 5 starsWorked for a few days then stopped displaying any video.
16 October 2019 - Published on Amazon.com
Verified Purchase
It worked for a few days and then would not give a video signal from any of the outputs. To troubleshoot, I tried my wife's RX 480 in my PC and it worked without issue. I then put this RX 5700 XT in my wife's PC and was still presented with no video signal. I've worked in IT before and fully understand that just because something is new from the factory, doesn't mean that it's always guaranteed to work.

I promptly opened up my Amazon Shopping app and requested to have this graphics card replaced. I'll reevaluate this review once the replacement is received and installed.

Kirkwild Scofflebottom
5.0 out of 5 starsOne heck of a card, by golly!
30 September 2019 - Published on Amazon.com
Verified Purchase
Beats the pants off my RTX 2060 and very closely compares to my 1080 TI. Buy it or forever regret your life decisions, nerd.
Read more
23 people found this helpful.

John Blackhawk
3.0 out of 5 starsnot so great
4 October 2019 - Published on Amazon.com
Verified Purchase
the performance is there but...
but image quality is not so good with radeon image sharpening. nvidia cards have better image quality
in some games there is terrible lag/stutter that makes games unplayable.
Read more
21 people found this helpful.

Travis
1.0 out of 5 starsGo GREEN or go home.
13 November 2019 - Published on Amazon.com
Verified Purchase
I'd like to start off by saying I REALLY gave this card a chance. I've had around 10 different Nvidia cards since I started PC gaming, all of which have given me 0 problems at all, aside from one that was DOA, which happens. This card is amazing in a benchmarking scenario, great scores, value for money, temps are great. As soon as I play any game I get stutters, freezing and FPS drops of 40+. When people say Radeon drivers are horrible, they're downplaying it, they are a DISASTER. I need to go in and tweak EVERY setting possible in Adrenaline to get a smooth gaming experience, but why? I got this card to save some money and enjoy some great performance, which I can only achieve by spending extra time messing with things that for some reason AMD has not figured out. Another really annoying note, the memory clock runs at max if your screen is over 120hz, and is a confirmed issue from AMD, so enjoy the extra power draw from that!

I popped in a 2070 Super, which I spent a total of$70 more than this card on, and wow. Coming from a GTX 1080, the 5700XT gave me a nice boost in benchmark performance, but nothing else. Honestly, if you NEED to save the $70-$100 on your GPU and are willing to compromise, sure this card would do it for you, at the expense of even more time tweaking settings you have no business needing to change.

In short, fork over the extra cash and get a Nvidia card. Pop that thing in and watch it go, optimized drivers, great performance and no hassle.
Read more
12 people found this helpful.

Sam K.
4.0 out of 5 starsDisappointing freezes
26 October 2019 - Published on Amazon.com
Verified Purchase
It is a shame that AMD still can't get their stuff together with drivers. This thing has the potential to be a power horse. However, unless you turn off a bunch of settings like "Enhanced Sync", close all other apps/windows, and run games in fullscreen mode, you will continually be frustrated by games freezing up. Black screen game freezes should be the exception, not the norm. Everything is running at stock speeds, power supply is 100W more than recommended, using 16GB or RAM, and cpu/gpu/case temps are normal.

I haven't attempted to redeem the digital codes because I intend to return the card as defective.

Taking the review from 2-4 stars. Downloaded the latest non-WHQL drivers (19.10.2) and it seemed to fix many of the stability issues. Still need to run everything in full-screen mode and keep "Enhanced Sync" disabled, but it hasn't crashed while playing since this latest driver update.
Read more
5 people found this helpful.
Go to Amazon.com to see all 62 reviews 3.3 out of 5 stars
Free & fast delivery, movies and more with Amazon Prime
Prime members enjoy free & fast delivery, exclusive access to movies, TV shows, games, and more.
> Get started
Back to top
Get to Know Us
Connect with Us
Make Money with Us
Let Us Help You
© 1996-2020, Amazon.com, Inc. or its affiliates