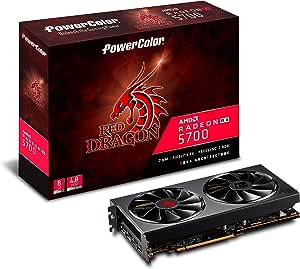 Robert S.
5.0 out of 5 starsGreat card and cheap+dual bios setting
13 November 2019 - Published on Amazon.com
Verified Purchase
One of the best RX 5700 cards right now for the price. Shout out to GamersNexus whom helped me in choosing this card per there full review of it+teardown.
Read more
16 people found this helpful.

Ampersand
1.0 out of 5 starsGreat when it works, black screens and crashes when it doesn't.
8 January 2020 - Published on Amazon.com
Verified Purchase
Like many of the other reviews have reported, I have had issues with the GPU randomly cutting to black / losing input. This happens seemingly at random, while playing games, or while idling and doing nothing. I'm running the GPU completely stock and have had these issues, I also tried undervolting it and still had the same issues.
I've tried running a GPU stress test for 20 minutes and the card ran fine, it really just happens at random. Pretty disappointing considering the high cost. This is also one of the few 5700 cards that's short enough to fit in my case, so my options are very limited.
I'm running the latest AMD drivers, and have also tried rolling back to previous year's version and still had the same issues.
I'm considering trying for a replacement, but considering this has been happening for other people it may very well be a good idea to just stay away from this card.

lindsey
5.0 out of 5 starsAwesome GPU.
12 November 2019 - Published on Amazon.com
Verified Purchase
I never heard of PowerColor until recently, but a lot of folks seem to say that they make quality AMD GPUs. This one looks awesome (Not RGB as I detest RGB). The build quality is good and so far I have not had any issues aside from a small, easily addressable HDMI-Audio problem when I hooked my PC up to my TV. But that is an AMD driver problem, not PowerColor.
Read more
10 people found this helpful.

Derek S.
5.0 out of 5 starsNo worries, give Radeon a go.
11 January 2020 - Published on Amazon.com
Verified Purchase
I tried putting this in a node202 and was successful, however I do not recommend it at all.. this powercolor card runs a bit wider then other cards. Only mentioning this because of picture.

As for how the Radeon5700 runs, I could not be more pleased. My friend recommended going amd and I was extremely skeptical because of the driver issues I heard of. Now I don't know if they have fixed all the problems in December because that's when I received this but I have had zero issues. From games like CodMW, Aoe, EFT all the way to planet zoo...no crashes, no problems. Definitely will be buying Radeon now since I know they work and just looking for better value, seeing as both my systems are Ryzen now.

As far as the power color heatsink, red dragon shroud... It's great, surprisingly quiet for such a thin heatsink and fan shroud. Iv had it on both silent and OC modes. Both seem to shut fans off at idle but OC mode does get kind of hot which will put fans above 1500rpm so I keep it on silent. Not much of a performance difference. Also my case sucks ass for ventaltion(node202) so could be a factor. I just prefer quiet.

Anyway ya, extremely happy with Radeon and powercolor made a nice heatsink for it.

pS. In case anyone from powercolor sees this. Thank you for not making it look like a toys r us special, like all gamer esc and no RGB. It's why I actually picked this one out of the 5700's on amazon. Will be buying more powercolor products.

jonathan lumley
1.0 out of 5 starsSo much potential, I am disappointed that I cannot get it to work
16 December 2019 - Published on Amazon.com
Verified Purchase
I had really high hopes for this card, the specs seemed like a really nice upgrade from my failing RX 580. However, I am on my second one and have just been having too many issues.

The first card had no fan spin. It crashed almost immediately during benching in Shadow of the Tomb Raider. I fired up Furmark to test it and noticed it pushing 100 c, I look inside my case and the fans are not spinning. Ok, it's a dud, no big deal. Also worth noting that it shipped in nothing but the retail box, and it appeared that it had been dropped. Shout-out to Amazon for a prompt next-day replacement.

The second card worked out of the box, fans and all. However it is worth nothing that this one did not come in a mailing box either, just a shipping label slapped onto the retail box (not ok, Amazon). I loaded up all the drivers and... terrible performance. Screen tearing, stuttering, frame drops, just awful. A bit of research later and I decide to do a clean install of windows. DDU did not totally fix it, for those wondering. I do a new installation on another SSD, load up the drivers, install Shadow of the Tomb Raider and everything performs buttery smooth like a $400 card should. Yay! End of story, right? Eh not so fast... I back up my data and install a fresh copy of windows and drivers on my main SSD, and go to stress test it. Passes stress testing with flying colors. Ok, how about some good ol' fashion Minecraft... and crash. More stress testing, pass no problem. Minecraft, crash. No picture. Reboot, no picture. Reboot, now only 1 of my 3 display ports are working reliably (I run 3 1080p monitors). That does it, I'm done. Tomorrow it's going back. I am really disappointed, was really looking forward to the performance this card had to offer. Now I am just hoping this card didn't do any damage to the rest of my system.

Also if you're brave enough to buy this card, make sure to adjust the stock fan curve. Crank it up, or else it will run too hot. I don't know what on earth AMD was thinking.

EDIT: I just picked up the Msi Mech RX 5700 from a local retailer, for around the same price. No issues so far, just a little tweaking around with the settings as AMD's drivers are still a bit buggy. I reccomend checking out that card. However if you are new to PC building, skip the RX 5700 altogether and go Nvidia. It's more of a plug & play experience and you'll actually be able to enjoy your system instead of sweating blood and tears trying to get it working properly.
Read more
5 people found this helpful.
Go to Amazon.com to see all 39 reviews 3.4 out of 5 stars
Free & fast delivery, movies and more with Amazon Prime
Prime members enjoy free & fast delivery, exclusive access to movies, TV shows, games, and more.
> Get started
Back to top
Get to Know Us
Connect with Us
Make Money with Us
Let Us Help You
© 1996-2020, Amazon.com, Inc. or its affiliates