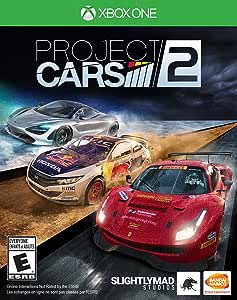 by Bandai Namco
Platform : Xbox One
Secure transaction
Returns Policy
Your transaction is secure
We work hard to protect your security and privacy. Our payment security system encrypts your information during transmission. We don’t share your credit card details with third-party sellers and we don’t sell your information to others. Find out more
In stock.
International product from outside Singapore Learn More.

Project CARS 2 is the next evolution in the award-winning racing series, featuring the most iconic cars under the most thrilling of conditions to deliver the "Ultimate Driver Journey" experience and adrenaline rush. Created by gamers, tested by world-class racing drivers, and the definitive choice of e-sports pros, Project CARS 2 brings together the essence of real racing in the most beautiful, authentically crafted, and technically advanced racing game on the planet. Project CARS 2 has it all: From GT to touring cars to endurance prototypes and exotic hypercars, delivering the full spectrum of motorsport racing with complete freedom to choose what and where to drive. Anytime, anywhere!

D. Gerry
3.0 out of 5 stars Sometimes great, and sometimes frustrating as hell ... Your Mileage May Vary!
7 January 2018 - Published on Amazon.com
Platform For Display: Xbox OneVerified Purchase
[ system: XboxOne standard w/ thrustmaster TX. Written after approximately 50 hours of play]
The weather, track selection and sound of (only some of) the cars is superb. The graphics are quite nice, at times - particularly reflections on the darker, glossy paint jobs. When I first started the game, it immediately felt like a leap in quality compared to PC1. The configure-ability and attention given to career mode and multiplayer and A.I. seems pretty good.
Unfortunately, the problems are too numerous and critical to overlook.
- A.I.: A common problem in all driving games, but this is one of the worst. IN lower-powered races it's no big deal, but if an AWD car is behind you in a RWD car, and you don't avoid any wheelspin, they will crash right into you before you even make it off the line! Then A.I. will do their damndest to hit you before the first turn. It didn't seem to matter how careful I was to avoid getting hit, either, regardless of the A.I. settings.
- SOUND: No ambient reflections, just clinical/dry plain engine sound. Tire noise sucks, which is a shame since the tires usually feel good and respond well. But other than under hard braking, burnouts and slides you won't hear them. Overall audio volume level is only about half of other driving games. That's a real head-scratcher. Gearbox can be annoyingly louder than the engine can be adjusted to, while manual has a similar "thunk" to dog-cut and/or racing sequentials. Engine sounds were better balanced against other sounds - fuller and with greater detail in PC1 across the board, so this is rather disappointing. Many cars in PC2 are more shrill, especially the rally cars and turbo-4cylinders. s. Most anything but a V8 sounds harsh and unappealing here; 4-pot Renaults sound like a garbage dispenser eating a pack of nails.
- REPLAY: dreadful engine sound on most cars, lame angles, poor camera cycling options, and god do the cars look SLOW SLOW SLOW. :-(
- FFB Wheel Users: With some wheels, this game may try to injure you. And unless you are in good physical shape it may likely wrench your wrists and arms about during crashes, before making adjustments. The problem is that there is no good implementation to aid adjustments; many adjustments to FFB seem redundant or effect a ridiculously wide range.... so guesstimating where your wheel should be is potentially treacherous. Even worse, these new and supposedly 'helpful' categories of FFB: "immersive", "raw" etc... act as just another impediment.
- CLUTCH: One of the weaker aspects of the game. PC1 grinded gears when you failed to use the clutch, but somehow this one doesn't. You can simply IGNORE the clutch to no detriment, as far as I can tell. Odd.
- DEFAULT TUNING SETUP: Cars all come with a default setup called "loose" - which it is usually anything but. Around 20-30 of the cars drive brilliantly. However most are are set up in some bizarre way as to be unfathomable as to why the car would be set up to ever snap and yank so much as they do. Perhaps it's thrustmaster thing, I dunno, because PC1 had a similar problem. It doesn't seem to produce consistent FFB response every time you drive the same car either; I just don't know why it does this and it's freaking weird. The 'Race Engineer' is barely helpful in any sense and is mostly a wasted feature.
- ASSISTS: The 'Gameplay' menu of assist adjustment sliders ~seems~ to offer control over ABS, TC and the like. However, while offering various settings, sliders become 'stuck' or greyed out as to be rendered useless. Oddly, on-the-fly switching or adjustment may be available, but it is trapped in a convoluted menu (a menu that you're supposed to dive into while driving... wtf were they thinking?) and a dreadful increment adjustment that is unfeasible, to say the least. I CANNOT tick through 50+ (i stopped counting) 'levels' of traction control while driving. 5 is MORE than enough for conceivably anyone... wth??!!
- PUNCTURES and DAMAGE: I haven't had any flat tires. Very strange, considering the attention given to tire modelling in general being high. Cars are also somewhat sturdier than before; I've yet to knock off a wheel once. Losing one used to happen quite often in PC1; around once every other session, roughly. No idea why they'd change it but they did.

TL;DR
PRO the visual presentation, expanded car list, awesome tracks, ANY weather on ANY track(!!!), some of the cars
CON infuriating A.I., the engine sounds, the tuning process in general, FFB default on my wheel and the confusing options, how badly most of the default tunes drive on most tracks in most conditions.

sono perfectionist
3.0 out of 5 stars XBox one controller pad users will need to change controls options for game's handling.
27 August 2018 - Published on Amazon.com
Platform For Display: Xbox OneVerified Purchase
Out of the box and even after September 2018 game updates installed (xbox connected to internet), the
handling for xbox one with gamepad controller was terrible. But after trying many online advice controls
configuration options and gameplay configurations, I found one group of options settings that really gives pretty
good handling. I'd give the game one star for out of box, after update installs handling, on xbox one
with a gamepad controller. I give it three stars after finding and entering a very good set of controls configurations.
After installing updates for the game, xbox one users with gamepad controllers should enter the following options
in the options- > controls- > configuration menu: I guarantee it'll work way better than default original settings:
Wheel controller users ignore this; original settings are ok for them.
steering deadzone 7
steering sensitivity 17
throttle deadzone 10
throttle sensitivity 30
brake deadzone 10
brake sensitivity 75
speed sensitivity 95
damper saturation 100 (option may not appear on menu)
controller damping 67
(leave other settings on page as is)
Next, important, enter these gameplay options in the options - > gameplay menu:
steering assist yes
braking assist yes
driving assists full
antilock brakes high
stability control on
traction control on
opposite lock assist on
(leave any other entries as is)
Read more
12 people found this helpful

River Barnhart
5.0 out of 5 stars Fantastic sim for beginners
28 March 2020 - Published on Amazon.com
Platform For Display: Xbox OneVerified Purchase
Project Cars 2 is the perfect way to graduate from racing games, (ie. Forza Motorsport), and enter the world of sim racing.
First let's talk about physics. Many of the cars in this sim truly feel independent and dynamic. You can feel a car's weight shifting on the tires under heavy breaking. When you accelerate down a long straight, the car jutters and bounces ever so subtlety as the suspension works to overcome the change in speed. A vehicle's weight, suspension stiffness, and driving assists genuinely do affect performance. When tc and abs are switched off they're off, trust me. There's nothing quite like tapping the brakes into eau rouge in a Zonda R, balancing the throttle and clipping the apex all while monitoring the car's momentum and weight transfer so as not to spin or flip. In short I am saying car's physics feel independent from the track. This is not something you would experience in Gran Turismo Sport.
Audio is okay. It may not be as dynamic as Assetto Corsa but overall, not bad. Turbos can be heard spooling and tires gradually increase noise the harder you push them. Throughout a race, the race director talks via radio congratulating you on good starts and overtakes.
Progression in this sim is particularly good. You can choose to begin from the bottom in karts, (my suggestion is to start here), or jump immediately into an open wheeled racer. You sign a contract with a team and continue your career from there. In a race, there are rules and regulations. Exiting the pits and reentering the track to early may result in a warning. Pushing someone off the circuit for an overtake will result in a drive thru penalty. The penalty system is very good.
Pit stops have a degree of depth aswell. Drivers have the ability to preconfigure pit strategies which can later be used in a race. You can control how much fuel is put in the car, tire type, tire pressure, which tires to replace, whether or not damage should be repaired, and which components you would like replaced if damage to them should occur. Your choices here determine how long your pit stop will last.
Lastly I want to mention pc2's graphics engine. If you're like me, the one thing you prioritize in a racing game is graphics. Even though Forza Motorsport is not a sim, I always give it high praise because of the excellent graphics. Between the textured grass and curbs on racetracks to the fantastic lighting and weather, Forza makes you feel like you're really there. In retrospect, most sims such as Asseto Corsa feel arcadey at least graphically. This is why I think Project Cars 2 excels. It has the physics of a sim and the realism/emersion of one aswell.
Read more
One person found this helpful
Go to Amazon.com to see all 46 reviews 3.2 out of 5 stars
Free & fast delivery, movies and more with Amazon Prime
Prime members enjoy free & fast delivery, exclusive access to movies, TV shows, games, and more.
> Get started
Back to top
Get to Know Us
Connect with Us
Make Money with Us
Let Us Help You
© 1996-2020, Amazon.com, Inc. or its affiliates