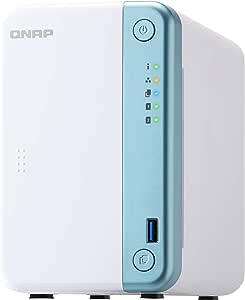 The TS-251D Series features powerful backup solutions for your files, devices, and media library. Schedule automated backups, sync your data across devices, while snapshots protect your files by fully recording your system.

Ernie Sharp
2.0 out of 5 stars Attacked through vulnerability- all data lost
24 April 2016 - Published on Amazon.com
Verified Purchase
*** EDITED TO ADD *** BEWARE I was attacked by Russian Ransomware and lost all of my data. I was running two QNAP drives, one backing up the other. My two NAS drives were backups for each other. My password was 11 characters in length, consisting of numerals, symbols, upper case, and lower case letters. It wasn't enough.
They were hacked and all files were encrypted. The MalWare APP caught the infection, but only after all data was lost. The app told me to contact QNAP for help. I did, and they accused me of having a weak password and told me there was nothing more I could do. They said I should have backed up mt data. I had. This machine and its backup WERE my backup. I had tried several cloud backup services, but all are setup for business and were very expensive. So instead, all of my files are gone- everything that I created since I last backed up to DVD ROM in 2016. So three years of tax paperwork, legal documents, and photos. Do an Internet search for "National Security Agency warns Russian military is hacking computer systems" and see the story for yourself. **** END OF EDIT ****

First, the short version: The QNAP 251 is a great NAS. It was easy to install, and easy to setup as a mapped network drive. The operating system was a bit of a challenge to learn, and I am still exploring the features and applications that this drive brings to the table.
So far, I am using it as a network drive, with file sharing between the two of us who live here. We are also sharing pictures, movies, and music on the drive. I also have some Web cameras mounted around the house that are connected to the NAS acting as security cameras.

The only downside is that this machine needs more than the 1 GB ram that it comes with, but do not spend the extra $400 buying the model with the 4GB of memory installed. The memory can be bought right here on Amazon for $50, and it takes 5 minutes to install it yourself.

There are hundreds of Applications that you can choose from that allow this NAS to do a large number of tasks. I am still investigating them.
Configuration:
I installed two 4 TB Seagate NAS rated hard drives, and set them up as a RAID 1, so that I have redundant storage in the event of a drive failure.
I power this machine with an APC BE550 UPS that I bought here on Amazon for $50, and it provides this machine, my Cable Modem, and my Router with 90 minutes of battery backup in the event of a power failure. It connects to the NAS with a USB cable, and the NAS allows you to set the machine to shut down after a settable amount of time, should the power fail.
I plugged both of the network cables into the router. I recommend this for faster network speeds.
I am planning to upgrade the RAM to 4 GB. I recommend this, as it is easy to overtax the 1 GB of RAM installed.
Read more
149 people found this helpful

rgerrans
1.0 out of 5 stars Died after 3 years and poor customer support
15 July 2019 - Published on Amazon.com
Verified Purchase
Mine died a little after three years of owning it. It was used as a home NAS with very low usage. Reached out to customer support. They acknowledged it was a hardware failure, refused to replace it due to being out of warranty, refused to do a paid repair on it (after initially putting that out as an option) and refused to provide a discount on a replacement unit. Will never buy a QNAP product again with that poor of reliability and support.
Read more
33 people found this helpful

I will begin to use it and see how well it performs. But for now, after maybe a 2 to 3 minute boot...the sucker goes fairly fast on clicks to interface (via web browser). Updated firmware to 4.3.3 which up to this date is the latest from July 27, 2017. I will update after I have really played with it.

I will begin to use it and see how well it performs. But for now, after maybe a 2 to 3 minute boot...the sucker goes fairly fast on clicks to interface (via web browser). Updated firmware to 4.3.3 which up to this date is the latest from July 27, 2017. I will update after I have really played with it.

D. D. FEDERICO
4.0 out of 5 stars Delivers along expectations. Happy with my purchase.
10 March 2016 - Published on Amazon.com
Verified Purchase
I bought this primarily to be the central repository of stuff for my home. The HDMI stuff I consider it a (nice) bonus. Packaging was good and the product arrived in perfect conditions.

PROS:
- Easy to setup. Even getting the bonding interfaces is super simple. Nice Web UI. You also get the most usual options for RAID or setup you may want.
- Runs very quiet.
- Nice selection of applications. Clients, servers, etc. To add a little bit to the basic NAS. Backup to other places.
- Kodi works very well. I've seen 1080p movies without a hitch.
- Gets updates fairly regularly although I get that probably most of them are for new products.
- I have a couple of Macs along with PCs. It was fairly easy to setup Time Machine.
- Disk encryption.
- Nice selection of apps from QNAP for IOS and Android.

CONS:
- VERY IMPORTANT!!!: I bought the one with 1GB and no disks. And bought a couple of 4GB Crucial, they worked like a charm but in order to install the second stick you have to break a small sticker that voids the warranty. Why would QNAP allow one stick with warranty and require you to break it for the second stick is beyond me and I consider that a very lousy practice. That alone brings one star down.
- This is not a con if you only want the NAS. But remember that the CPU here is pretty anemic and stuff like Plex transcoding might be too much for it. There are mentions of transcoding in some other places, but those are transcoding jobs that you have to create from the web interface and are assisted by the GPU but don't spect CPU usage to be light they are only "assisted".
- The trays are plastic with screws so don't think about changing disks a lot, I do not believe they will hold much. On the other side, I believe it is expected at this price point.

If you want a NAS without forking good money for the (actually) more capable and/or high end I believe this is a wonderful choice. It is fairly easy to setup and works. Buy a version with more than 1GB of RAM otherwise you will be constrained as soon as you get happy about apps, specially if something uses Java.
Read more
37 people found this helpful
Go to Amazon.com to see all 190 reviews 3.7 out of 5 stars
Back to top
Get to Know Us
Connect with Us
Make Money with Us
Let Us Help You
© 1996-2021, Amazon.com, Inc. or its affiliates