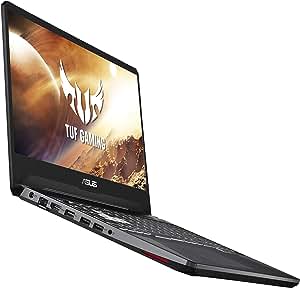 by ASUS
4.3 out of 5 stars 848 ratings
Available from these sellers.

Style: 120Hz | 256 | GTX 1650
Technical Details
Additional Information
Feedback
Would you like to tell us about a lower price?
If you are a seller for this product, would you like to suggest updates through seller support?

Asus TUF Gaming FX505 is a powerful Windows 10 Gaming Laptop that combines gaming performance with up to a narrow bezel IPS-Type panel and an extended lifespan, thanks to its patented anti-dust cooling (ADC) system. Equipped with NVIDIA GeForce GTX 16-series graphics, and a quad-core Ryzen 5 processor, FX505 is able to play the latest games and multitask With ease. FX505 features one of the fastest Wi-Fi standards available The latest Intel Wave 2 Wi-Fi 5 (802.11AC) boasts data transfer rates of up to an incredible 1.7Gbps. To top it all off, it's backlit gaming Keyboard is rated at 20-million keystroke durability. *The actual transfer speed of USB 3.0, 3.1 (Gen 1 and 2), and/or Type-C will vary depending on many factors including the processing speed of the host device, file attributes and other factors related to system configuration and your operating environment.

Fu Yong
5.0 out of 5 starsA perfect laptop for light gamers provided you know computer a bit
28 September 2019 - Published on Amazon.com
Style: 120Hz | 256 | GTX 1650Verified Purchase
What a great laptop for its built quality and performance. But you need to tweak a few things to maximise gaming performance:

- Purchase another 8GB memory for dual channel
- Set UMA buffer size to be auto in BIOS (this gives 2GB video memory in case it needs). You can use 512M if you want.
- In GeForce control panel, use GTX for both 3D settings and PhysX.
- In power options, set everything to be max performance for both battery and AC (3 options in total).
- Install latest AMD and GTX drivers, and upgrade to Windows 1903 latest update that resolved a power option related bug that can limit CPU performance.

Enjoy the awesome laptop from ASUS.

Paul K
5.0 out of 5 starsGreat Gaming Laptop Value
8 May 2019 - Published on Amazon.com
Verified Purchase
I've been testing this laptop out for a few days now, and overall it's been great. My usage for this is 70% regular computer work (business, light Photoshop, web browsing, etc.) and 30% gaming when I travel as I have a full size gaming rig at home.

I like the form factor and aesthetics of the device, it doesn't have much flex or "creakiness" to it, and it looks great sitting on a desk.

The RGB keyboard is a great touch, but wouldn't allow me to change the color until I downloaded an extra piece of software. It cycles through all the colors by default. Other than that everything worked right out of the box and the performance has been very good. The 1660ti is a beast and has destroyed anything and everything I've thrown at it in 1080p.

The 3750H cpu has been good as well, though as expected with Ryzen in some CPU intensive games it gets more than it can handle.

Assassin's Creed Odyssey is a great example. I can play at ultra at 1080p with a locked 30FPS framerate, but if I attempt to get a steady 60fps on any settings, including the lowest, there's just too much going on and it can't do it, even with plenty of GPU headroom. Athens just melts it. Having said that Athens pushes my desktop 9900k, so I don't consider it a negative, just something to keep in mind if you're wanting 1080p60 on everything.

The only other games I've tested so far are:

The Witcher 3: Steady 60fps on ultra (had to dial back one setting, "foliage" to high, and no hairworks). Great experience.

Doom 2016: All ultra locked 60 fps using less than 50% of the GPU and CPU. This title can play at 100fps, but it gets too choppy in some high intensity spots, so I lock it to 60 for a smoother experience.

Thermals are great, GPU never exceeded 71c at 100% usage, no throttling that i was aware of. Make sure fans are on Turbo, which can be done with a touch of a button on the keyboard, which is awesome.

The noise levels during normal usage are fairly quiet, and I appreciate that it has a silent fan setting that can dial things back in case you don't want to let everyone in the classroom or office know you're rocking a gaming rig.
Noise levels during gaming were loud, but I've certainly heard much worse from other gaming laptops. I also appreciate that the top of the laptop doesn't get hot, even after prolonged gaming sessions, so you can rest your hands on the keyboard without discomfort.

The screen is decent, nothing amazing, but perfectly serviceable, especially considering the price. The 120hz refresh rate is nice for regular usage, but in gaming I've found that the CPU can't get many games past 80-90fps before hitting it's limit, so I've been staying with a locked 60.

Also be aware this screen doesn't have any type of adaptive refresh rate (Freesync/Gysnc) so make sure to use Vsync and a frame rate limiter if you want locked frame rates as very few newer games can hit the native 120.

This model comes with 2 drives, an SSD and a mechanical hdd. I replaced the hdd with a Samsung Evo ssd, and it took about 5 minutes. The entire bottom comes off the machine after removing all the bottom screws and carefully popping the bottom panel off. I recommend using a plastic separator tool to avoid damage, the tabs were a bit too snug to pop off with just fingers. You also have access to the fans and ram in case you ever need to service and/or clean the dust out.

Other than McAfee there isn't much bloatware and the preloaded Asus apps work fairly well.

The keyboard and track pad are both comfy and work well. The track pad may turn some people off because it doesn't have separate left/right buttons, but it's large and responsive which is all that I look for.

Overall I'm very satisfied with this laptop. It looks great, performs very well, especially considering the price, and feels very durable. My one criticism is the lack of adaptive refresh rate tech, but at this price point that's wishful thinking.

JZ
5.0 out of 5 starsSolid Gaming - Premiere Pro Laptop.
31 October 2019 - Published on Amazon.com
Style: 120Hz | 256 | GTX 1650Verified Purchase
Overall a terrific value for a gaming laptop. The GTX 1650 4Gb video card runs just a tad slower than a GTX 1060. Amd Ryzen 5 processor with 4-core is ample for gaming and HD editing in Premiere Pro. 8Gb of ram wasn’t enough for my apps, so I ordered an additional 8Gb stick for the available slot. See photos for model number of the Samsung stick. The case is light yet stiff plastic, keyboard and trackpad are not bad. I’ve had more expensive laptops with worse. 2nd 2.5 hard drive bay for expanded storage. The standout spec is the 120hz display, overall it looks great for gaming and editing. Some might pick on its color specs, nits, however ASUS includes a nice app to adjust to your liking. Overall wish I would have found this sooner, I’ve wanted a mobile gamer and light editing system for travel. This fits perfectly for my on the go needs.
Read more
136 people found this helpful.

Cecil Smith
1.0 out of 5 starsRead before you buy not recommended
15 November 2019 - Published on Amazon.com
Style: 120Hz | 256 | GTX 1650Verified Purchase
Not worth the time or money and especially not for gaming. First I tried to play some TV shows on this laptop and it started out fine then it froze up and crashed. Next I tried to play Paladins on this laptop and as seen in the picture it was a horrible experience. The eyes on the champions were ghostly like and the background was blue and it's not supposed to look like that. Also I would like to add that the laptop is not light weight it's actually a bit heavier than I expected. The last picture is what the game is supposed to look like. The last picture is taken from my desktop, check out the difference in how the game is supposed to look as in to what it looks like on the laptop. . I purchase the laptop again this time of 15.6 and I'm getting the same issues I had with the 17.3 don't waste your money on this laptop.
Read more
132 people found this helpful.

Chris Dietz
4.0 out of 5 starsTerrific gaming laptop with horrible battery life
17 May 2019 - Published on Amazon.com
Verified Purchase
I purchased the model with the Ryzen 7 3750H CPU and GTX 1660Ti graphics card. The laptop overall is very fast. The NVME OS drive was able to transfer at over 950 MB/s. Not as great as a Samsung NVME, but still better than a SATA SSD. The secondary D: drive was 1tb, and it's performance was abysmal. It would only write to the drive at 40 MB/s. The dual fans werent overwhelmingly loud when gaming, however they are still running at over 2500 rpm even when the system is idling. Farcry 5 was able to run at over 60 fps on max settings.

The reason why I ended up returning this laptop is because of the terrible battery life. I understand that if I'm gaming or using a moderate amount of CPU that the battery life would be terrible. I turned all settings to maximum battery life, both in the asus software, and in the control panel's power settings. I dimmed the display to minimum, and set the refresh rate to 48hz. I used device manager and disabled the GTX1660. The keyboard LEDs were turned off. Wifi was on and connected by itself to a mobile hotspot. The laptop was idling with no apps open and just sitting at the desktop. It was using the minimum amount of power that I could set it at. The battery lasted 1 hour, 15 minutes from 100 percent to 5 percent.

Using a kill-a-watt, this laptop was using 50 watts while idling. This is why the laptop's battery was unable to keep up. While playing Farcry 5, the kill-a-watt showed the laptop was using 130 watts. This is basically a desktop computer with a built in UPS. I would have loved to keep the laptop, but needed to have a low power mode last at least 2-3 hours.
Read more
115 people found this helpful.
Go to Amazon.com to see all 449 reviews 4.0 out of 5 stars
Free & fast delivery, movies and more with Amazon Prime
Prime members enjoy free & fast delivery, exclusive access to movies, TV shows, games, and more.
> Get started
Back to top
Get to Know Us
Connect with Us
Make Money with Us
Let Us Help You
© 1996-2020, Amazon.com, Inc. or its affiliates