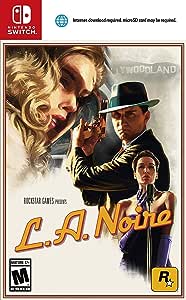 by ROCKSTAR GAMES
Platform : Nintendo Switch
4.6 out of 5 stars 586 ratings
Secure transaction
Returns Policy
Your transaction is secure
We work hard to protect your security and privacy. Our payment security system encrypts your information during transmission. We don’t share your credit card details with third-party sellers and we don’t sell your information to others. Find out more
Currently unavailable.
We don't know when or if this item will be back in stock.

A dark and violent crime thriller set against the backdrop of 1940’s Los Angeles. Amid the post-war boom of Hollywood's Golden Age, Cole Phelps, an LAPD detective is thrown headfirst into a city drowning in its own success. Corruption is rampant, the drug trade is exploding, and murder rates are at an all-time high. In his fight to climb the ranks and do what's right, Phelps must unravel the truth behind a string of arson attacks, racketeering conspiracies and brutal murders, battling the L.A. underworld and even members of his own department to uncover a secret that could shake the city to its rotten core. Utilizing revolutionary facial animation technology that captures every nuance of an actor's facial performance in astonishing detail, L.A. Noire blends the breathtaking action of chases and shootouts with true detective work for an unprecedented interactive experience. Solve brutal crimes, plots and conspiracies inspired by real crimes from 1947 Los Angeles, one of the most corrupt and violent times in L.A. history. Search for clues, chase down suspects and interrogate witnesses as you struggle to find the truth in a city where everyone has something to hide.

A dark and violent crime thriller set against the backdrop of 1940’s Los Angeles.

Amid the post-war boom of Hollywood’s Golden Age, newly minted detective Cole Phelps embarks on a desperate search for truth in a city where everyone has something to hide.

Bryan lambert
5.0 out of 5 stars A very good port, Rockstar you did good 👍
28 November 2017 - Published on Amazon.com
Verified Purchase
I never would have imagined this game being remastered better yet a Rockstar game releasing on a nintendo console. This game is a must buy if your into solving mysteries and crimes. The cases are well written, and the game looks pretty good on the switch for a portable device. This is defeintly a good port, well worth the purchase even with the switch tax.

FYI: there will be 14 gb download out of the box. you will need a sd card to play all of the game. You can play a portion of the story without it.

5.0 out of 5 stars A very good port, Rockstar you did good 👍
Reviewed in the United States on 28 November 2017
I never would have imagined this game being remastered better yet a Rockstar game releasing on a nintendo console. This game is a must buy if your into solving mysteries and crimes. The cases are well written, and the game looks pretty good on the switch for a portable device. This is defeintly a good port, well worth the purchase even with the switch tax.

FYI: there will be 14 gb download out of the box. you will need a sd card to play all of the game. You can play a portion of the story without it.

To be clear: there is nothing in this world to explore or discover, and there are no side quests or puzzles you can stumble upon. The closest thing is that while you’re driving, you might hear the dispatcher mention a crime nearby and you can briefly pursue a suspect while in the middle of another mission, but it’s still very linear: you show up to the spot on the map, the cut scene plays, and then you have to do what the game wants. It's such a waste to recreate 1940s Los Angeles and give players have no reason to explore it, but that’s what the makers of LA Noire did. If you want to scratch an open-world itch that you’re left with after beating Zelda Breath of the Wild, Mario Odyssey or Lego City Undercover, look elsewhere because LA Noire won’t help.

Aside from my disappointment that the world has nothing to offer, the game itself isn’t bad. Like I said, it’s very linear but you can’t really forget the details of each case if you want to get your lines of interrogation right, so it being linear helps in that sense. The game really depends on the acting and animations of the suspects for you to know which direction to go in your questioning and I think it’s mostly successful. If you watched Mad Men, the first thing you’ll notice, like me, is that the guy who played Ken Cosgrove is the lead character in this game - the facial animation is pretty impressive because it looks just like him without that dead-in-the-eyes look that so many video games have.

The game is only as good as the cases and the plot twists - I’m a third of the way through and so far the storytelling is pretty good. I just wish the game wouldn’t waste our time by having us look at random unimportant pieces of potential “evidence.” I also find myself getting lost a lot while driving to destinations because there is no navigation system in the game - just a mark on the map - and there are dead ends, tunnels, bridges and other issues on the roads that leave you driving in circles, which is really annoying. Since the game is so story-driven, everything outside the interrogations and cut scenes is just an unwanted delay, and getting lost while driving is boring.

I haven’t played any version except the Nintendo Switch version, so I can’t compare, but this game is slightly buggy. Sometimes I can’t select a question in my notebook and I need to exit out of it and go back in. Whenever I hit something while driving, it takes a long 5-second delay for my passenger to react with some sort of “Watch the road!” which sounds very goofy and annoying. The sense I get is that everything should feel a lot smoother than it does. At least they realized that some of the “action sequences” (where you have to chase suspects) are tough and they let you skip them if you fail three times in a row.

All in all, if you want a story-driven, acting-driven game, check this one out, but if you want to explore an open world, then pass.
Read more
20 people found this helpful

fredTLodong
3.0 out of 5 stars unique but lacking
14 February 2019 - Published on Amazon.com
Verified Purchase
I picked this up after getting the original version on the Xbox 360.....years ago. I guess time got away from me and I didn't realize how dated this game feels. This is an updated version of this title if I am not mistaken. But honestly I can't tell that it is different very much at all. I have sat down and played this a little bit here and there, and for sure there are highs and lows. The cases can be interesting to work, but the gameplay bogs down and the lack of smoothness with the controls (especially in gunfights) is downright appalling. Lots of driving but the open world seems empty and to a degree, lifeless. But in all fairness, this game is about 8 years old I think.
If you got it the first time around, I would pass on this newer version. If you didn't and can get it cheap, its worth it.
Read more
6 people found this helpful

mr dead
5.0 out of 5 stars Very atmospheric
19 January 2020 - Published on Amazon.com
Verified Purchase
I have been playing for about an hour. Not the usual type of game I play but my initial impression is that it is very addictive.
You start out with some fairly simple getting to know you sort of stuff in the game. Drive here, arrest someone. Drive there pick some clues and chase someone. You get to have a shoot out which is sort of fun because you don't have a limit to ammo and you can blind fire with a shotgun. It ends with an interrogation which was tricky but you get to keep trying until you get it.
Then the game begins. And I'm still running around chasing my first crime. Witnesses can mislead you and it's tempting to just accuse people but a conservative approach may not be the best way to go. It's addictive and very involving.
One aspect I love is the authenticity of it. It's very noir but also very much in sync with the times. The costumes, the acting, the cars on the street and the fact that you hear your car grinding when you take a turn to fast. The light jazz music on the radio is all very real feeling too.
There is one thing I noticed. A 6gb download and you can't run the software while it downloads. It seems to be some sort of social aspect to the game where you can use Intuition in the solving of mysteries and involve the online community. Our wifi is slower than treacle running up a hill so I don't know how long that will take to download or what kind of difference it makes to the game. But I will update this if it turns out it makes a difference.
Strange thing is this seems very underrated to me. Nintendo looks like it is all about Mario and Zelda or whatever but this game, in my opinion, feels like one of the best yet.
Read more
3 people found this helpful

Ekimsnilloc
5.0 out of 5 stars An amazing game that can be played portable!
14 May 2019 - Published on Amazon.com
Verified Purchase
LA Noire is a relatively unheard of title (at least to me) made by Rockstar Games.

Rockstar Games is most likely the best well known videogame company on this planet, and they also are well known for making the best video games that humans can make.

This game is no exception. You really feel like a detective when you play it, and the way the game plays makes you feel like it's organic and not scripted. This is an awesome way to feel like you are legit a police officer, and the gameplay is very realistic and fun.

Not to mention the facial expressions are so extremely realistic, sometimes it feels like a movie!

Would definitely recommend!
Read more
4 people found this helpful
Go to Amazon.com to see all 94 reviews 4.2 out of 5 stars
Free & fast delivery, movies and more with Amazon Prime
Prime members enjoy free & fast delivery, exclusive access to movies, TV shows, games, and more.
> Get started
Back to top
Get to Know Us
Connect with Us
Make Money with Us
Let Us Help You
© 1996-2020, Amazon.com, Inc. or its affiliates