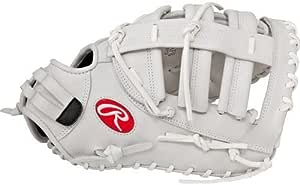 The perfectly-balanced patterns of the updated Liberty Advanced Series are designed for the hand size of the female athlete to provide an improved level of control and comfort. Constructed with a hand opening and finger back adjustments to accommodate the fast pitch player Rawlings is introducing a dynamic new pattern technology to advance the fast pitch game and provide the opportunity for an upgraded level of performance.

Morley Dotes
5.0 out of 5 stars Great glove, easy break in
26 July 2017 - Published on Amazon.com
Hand Orientation: Right Hand ThrowStyle Name: First BaseColour Name: 13 inch - Single Post Web/Pull StrapVerified Purchase
I bought this for my daughter because she needed a new glove. It is very comfortable and broke in pretty quickly. The leather is good quality. The glove is not Heart of the Hide, but still very nice...and broke in much faster than my sons HotH. The pocket is great and the size is perfect for her. My daughter is 12 years old, but tall for her age. She was using a 12 inch glove but it was getting a little small. She is an above average player and this glove does a great job and I am very glad I bought it for her.
Read more
13 people found this helpful

Armand & Rebecca
5.0 out of 5 stars An Excellent Choice for Fastpitch Players Seeking Performance, Reliability, and Durability
20 April 2020 - Published on Amazon.com
Hand Orientation: Right Hand ThrowStyle Name: First BaseColour Name: 13 inch - Single Post Web/Pull StrapVerified Purchase
Some people like to read long reviews, some like to read short reviews, so I will try and accommodate both:

Short review: The Rawlings Liberty Advanced first base mitt (RLAFB) is arguably one of the best fast pitch gloves on the market for competitive players. At its price point though, it is without a doubt THE best fast pitch first base mitt on the market. You can always go more expensive (e.g. Rawlings Heart of the Hide), but this Liberty Advanced glove delivers top quality and performance for 12U-18U fast pitch players and at a reasonable price.

Long review: Prior to making the switch to Rawlings, and early in our daughter’s fast pitch “career," she used a different well known manufacturer's 1B mitt where after its first season and a half, became untrustworthy as it wasn’t able to secure the ball in the palm area due to the leather flexing outward when squeezed. That manufacturer was contacted and they sent us a warranty replacement…..that had the very same defect after exclusive use through the season that followed.

When she made the jump to Class-A ball, we knew she’d have to have equipment that could be counted on at all times and also withstand the rigorous schedule she'd be facing. The one thing we were worried about is that she is “OCD” when it comes to her equipment. Everything has to be a certain way with her. After reading some early reviews (this glove was relatively new to market at the time), we decided on the Liberty Advanced 13” fast pitch first base mitt (RLAFB) and well, she took to it immediately. Admittedly, it had some minor breaking in to do, but nothing like her other gloves. It was game ready within a few weeks. The very same Rawlings 1B mitt we purchased here back in early 2017 has been with her now for three full travel ball seasons (fall ball + summer ball = one season) plus a full season of high school ball.

The glove has seen well over 1,200 putouts (not just catches, but in-game putouts at 1B) and thousands of catches during competition in high school, Class-A and Class-A Elite travel ball, and of course, countless practices. The glove still has its integrity and has literally become an extension of her arm during gameplay. During the 2017/2018 season, she earned recognition as being one of the top first base girls in her travel team’s home state. While credit goes to her work ethic and talent first, the quality of her glove and the confidence it brought her cannot be understated.

All in all, I would very highly recommend this glove regardless of a player’s experience at first base — though in the hands of a seasoned player, it should at least meet every expectation, if not exceed them. Well worth the money spent.

UPDATE 1/21: In our daughter’s final college showcase tournament in November 2020 (4 full years of use), the material inside the glove that separates her fingers gave way due to dry rot. It started with just one finger slot, but others tore soon after making it barely usable for competitive play.

She recorded well over 1,200 putouts with the glove during tournaments, and several hundred more from scrimmages and high school ball. Factor in countless practices over the course of four years and conditions ranging from the blistering summer sun to below freezing temps late in the year - her glove got quite a workout and withstood the demands that were placed on it.

For Christmas, all our daughter wanted was the same glove, but customized directly from Rawlings - and that’s what she got. We expect nothing less than reliability and high performance from the new glove while she finishes up her travel ball career in a few years and moves on to the college level. We still highly recommend this glove.
Read more
4 people found this helpful

Megan Battson
5.0 out of 5 stars This glove is easily adjustable and fits my hand very well
20 October 2016 - Published on Amazon.com
Hand Orientation: Right Hand ThrowStyle Name: First BaseColour Name: 13 inch - Single Post Web/Pull StrapVerified Purchase
I don't have short hands, but I do have narrow hands so most softball gloves I try on (every glove in N. Colorado and S. Wyoming under $300) slide right off my hand. This glove is easily adjustable and fits my hand very well! The deep pocket is fantastic and greatly appreciated! The gloves doesn't take too long to break in with just playing some catch and leaving a ball rubber banded in it. I was worried about the glove already being 80% broken in but it's standing up well and it's been getting a lot of use (my last glove was 'game ready' and the fingers were bending backwards for even a moderately paced throw after a couple months). The mitt is nicely rigid and doesn't give even to hard throws. I don't mind the white, but our pitcher keeps threatening to rub it in some mud because it 'blinds' him. I will be buying another one of these as a back-up for someday when this one wears out. It is well worth the money!
Read more
13 people found this helpful

Louis Hsiao
5.0 out of 5 stars Ready to perform out of the box.
13 February 2018 - Published on Amazon.com
Hand Orientation: Right Hand ThrowStyle Name: CatcherColour Name: 34 inch - Pro H Web/Pull StrapVerified Purchase
Bought this catcher's glove for my daughter (14U travelball). She absolutely loves it. It has a great pocket and is just about ready to go out of the box with very little break-in time. It's well built, nice leather, great fit. Excellent choice for the serious catcher! We love the white leather which is an easy target to see for the pitcher.
Read more
6 people found this helpful
Go to Amazon.com to see all 177 reviews 4.7 out of 5 stars
Back to top
Get to Know Us
Connect with Us
Make Money with Us
Let Us Help You
© 1996-2021, Amazon.com, Inc. or its affiliates