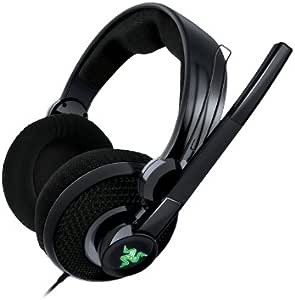 by Razer
3.7 out of 5 stars 175 ratings
Currently unavailable.
We don't know when or if this item will be back in stock.

The Razer Carcharias Gaming Headset for Xbox 360/PC is a circumaural gaming headset designed for extended hours of gameplay with superior gaming audio, clarity, and bass. Get ready to experience extreme comfort with circumaural ear cups and interchangeable ear cushions.

Jonathan Kreiser
2.0 out of 5 stars Not the old model
16 August 2016 - Published on Amazon.com
Verified Purchase
There is static noise in the background(listening audio and transmitted Mic input) when using these that gets very annoying. I see other reviews saying that a better power source would fix the issue but I would not trade my previous (older model) carcharias headset to even try it for my wife... Not a fan of the new version at all. It lost all the good features. No more braided nylon(?) cable that never stuck to anything and was the best invention that could ever exist for a headphone..... The new cable is a softish rubber that feels uncomfortable and gets stuck to things. I feel like the volume control box is a bit bulky too, it is bigger than the old headset version.

Our cat did break the headset as well. The wire got stuck to her and it separated from the controls box so we lost one of the wires for Mic input. so it's dead after 2 months.

Can't say the old Carcharias would have survived that but maybe without the rubber wire. Overall disappointed does not seem like a -next- model seems like it should be a previous model.

matt
5.0 out of 5 stars Seven years of hard use out of the first one, replaced it with another because I liked it so much.
23 July 2017 - Published on Amazon.com
Verified Purchase
This is my second Carcharias headset.

I used to be a fairly hardcore gamer, playing multiple MMOs, FPSs, and racing games until all hours of the night. The one gaming periphial I seemed to destroy over and over was my headsets. I was going through 3-4 headsets a year. I was discussing my issues with a fellow gamer at a big electronics retailer, and he strongly recommended the Carcharias. I honestly thought he was just trying to pad his paycheck, but said store had a good return policy, so I bought it and took it home to try it. I got seven years out of that first Carcharias headset. I loved everything about it, it was comfortable, my fellow players could hear me clearly through the mic, the sound was fantastic compared to most others I'd tried, and most importantly, it was DURABLE. After 7 years, one of the wires finally broke in it's cord, and I lost sound in one ear.

I replaced that first Razer Carcharias with a Razer Kraken. While the Kraken sounded much better, it was so tight, heavy, and uncomfortable, that after just a few weeks, I replaced it with my second Carcharias.
Read more
One person found this helpful

Annalise Marwede
2.0 out of 5 stars Constant white noise and audio echo
29 December 2017 - Published on Amazon.com
Verified Purchase
It gives a constant white noise, and all audio is duplicated (it sounds like the audio is echoing). Randomly I would get a crackling noise in the left ear. I had 3 different people try to fix it and after trying two other headsets its very obvious the issue is from the headset specifically. I really liked the original Razer Carcharias but for me this one is practically unusable. It did 'work' on arrival and the packaging was fine, but the fact that all audio echoed like it was being played into a bucket sitting in a cave made it really awful.

It was very comfy to be fair, but I was told from my friends in discord that the mic was very quite. For them to be able to hear me they had me at max volume and I was still fairly quite. If I messed with my mic setting they got what they called a constant "buzzsaw noise".

This might have just been me getting a headset from a bad batch, but it was really unusable for me.
Read more
One person found this helpful

Chris L
1.0 out of 5 stars It is sad when a company refuses to acknowledge a defective design ...
8 October 2015 - Published on Amazon.com
Verified Purchase
Just got these literally 30 minutes before writing this review. I unfortunately did NOT read the reviews as i was such a big fan of the original Carcharias which were purely analog, NOT USB! The original design served me for 6 YEARS now without a single issue. Sadly, the volume rocker now cuts my audio out completely on a regular basis which made me look for a new pair and i did NOT pay attention to both existing reviews and the fact that these are NOT the oldschool analog design. After testing them, trying each of my 8 USB connections, and even pulling out my volt meter to test the grounding at the USB's (all of which checked out perfectly within standards), I can safely say these latest Carcharias designs are deeply flawed. BUYER BEWARE!!!!!

It is sad when a company refuses to acknowledge a defective design product after so many reviews exhibit the same problems, and they blame EVERYONE's USB grounding? Funny claim when 2x other USB headsets i have work 100% perfectly fine. Odd. Guess I will be giving up on Razer headsets from now on! :( Anyone got other brand suggestions?
Read more

Mina
5.0 out of 5 stars Best gaming, headset! Light, comfortable for long sessions.
27 August 2015 - Published on Amazon.com
Verified Purchase
The best gaming headset I have owned. I like the open cup design, the space between the cups makes it so comfortable and does not squeeze your head like others. Super light with soft velvety ear cups that will not make you sweat (I hate the leather ones). Neoprene cushion around the top makes is fantastic for spreading the weight for long gaming sessions. I own the 2008 model of the same and this is improved but still as good. I am purchasing a second pair. Only about 8 oz, you can barely feel it. I am only replacing my old ones because of wear (7 years) and not because they broke or stopped working.
Read more
4 people found this helpful
Go to Amazon.com to see all 165 reviews 3.4 out of 5 stars
Back to top
Get to Know Us
Connect with Us
Make Money with Us
Let Us Help You
© 1996-2021, Amazon.com, Inc. or its affiliates