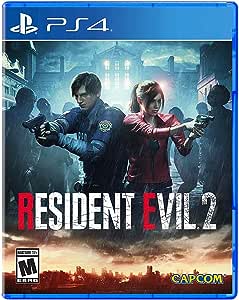 Fastest delivery: 24 - 28 Apr. Details
Ships from and sold by Royal stance, from outside Singapore. For information about products sold by international sellers, click here.

bryant fontaine
5.0 out of 5 stars better than the original
26 January 2019 - Published on Amazon.com
Platform For Display: PlayStation 4Edition: StandardVerified Purchase
this is better than the original & i'm a old school RE fan since 97 . this remake is more darker & serious & this what we needed after the series went into action with RE 4' 5&6 the series was starting going into the wrong direction survival horror was gone until REVII saved it & now we gotten another one thank you capcom for listening to the fanbase
Read more
104 people found this helpful

Particle Ghost
5.0 out of 5 stars A Remake Done Right!
25 January 2019 - Published on Amazon.com
Platform For Display: PlayStation 4Edition: Standard
I started playing Resident Evil with the original 1996 release, and it was actually the first game I picked up for the
PlayStation 1. I have played every, and I mean every Resident Evil game in the series, including the spin-offs. The series has had so many ups and downs that more often than not, I often had to forces myself to finish many of the Resident Evil games. When they are great, they can be some of the best games around, but when they are bad, they can be some of the worse games I have ever had to endure. There is no other way I can put it, the series as a hole has been wildly inconsistent.

Out of all the games in the series, Resident Evil 2 has always been my favorite, there was so many things the game did right. I was 16 when Resident Evil 2 was first released, and waited outside of Buy Right Video Games before they opened for my copy. I was heavily addicted to the game for that entire year, and it never left my system until later in the year when is was time for the original Metal Gear Solid to bestow its glory. I later picked up a Sega Dreamcast to play it all over again, as it featured upgraded graphics with a new Nightmare Difficulty Mode. Resident Evil 2 was my most, and still is, the game with my greatest amount of completed speed-runs, it would fall somewhere around 100 playthroughs.

With all that being said, people will be happy to know that the remake stays very true to the original. I am sure there will be some people who will leave negative reviews regarding any changes, as some events have been rearranged or expanded upon with some surprising twists, but everything is better than the original in every conceivable way. Capcom has even added the extras from the original in the remake, such as the playable Tofu used for the games collision detection as well as HUNK. Have no fear for those who are wondering, because the remake does include the Wesker's Desk Easter egg and Brad Vickers. The game has an astronomical attention to detail while still paying homage to the original with the uttermost respect.

There are many things I would like to say but would rather not say, its one of those games people should experience for themselves. I will however say a few things. Each campaign is around 8 hours long and offers 3 difficulty settings, Assisted, Standard and Hardcore. The first 2 settings use a auto-saving and manual save feature with one being a little harder than the other. Hardcore is very hard, featuring very strong enemies and no auto-aim. Hardcore also uses the "old school" saving system, meaning players can only save using Ink Ribbons that are hidden within the games world.

Be warned, the Hardcore Mode in the remake is very extreme, and I would say it is on par with the original Evil Within Akumu Mode. The graphics and lighting are superb and uses the same engine found in Resident Evil 7. The sounds are top notched, the controls are tight and the characters move and feel real as if they have weight to them. The zombie animations and blood splatter are the most realistic I have ever seen in a game to date.

On point shooting lets players blast off arms and legs as well as heads. Throughout the journey, all previous bosses pay their respects, nothing has been cut from the game. For those who know what to expect from playing the original, I will say yes to those who are wondering, you will be "stalked" relentlessly by yours truly, and jump scares have been shifted around so players never known what to expected. Inventory and ammunition management is still key, players are given just barely enough ammo and healing items and you cannot carry everything you find, always hording what you can store.

The quality is fantastic and I would recommend the remake to anyone out there who loves horror games. Both Leon and Claire each have a top notch campaign that never deviates from the original, and the 3 difficulty options are welcoming to those who may want an easy ride as well as hardcore. Capcom said they may follow with other remakes depending on our support and feedback and so far I like what I see. I would love to see the original built from the ground up, and while I enjoyed the HD remake, its still not on the same level as a remake of this magnitude. Lets make it happen!
Read more
103 people found this helpful

Amazon Customer
2.0 out of 5 stars Short, stressful and not as good as RE4.
27 January 2019 - Published on Amazon.com
Platform For Display: PlayStation 4Edition: StandardVerified Purchase
Wanna spend $60 on a 10 hour game? Not me.
I only like RE4 because it's more of an action game than a stressful scary game.
This is less scary than RE1 but still too scary and stressful to actually be fun.
Ammo and inventory space is too limited and health is too plentiful.
I'd rather play a game that's actually fun like Arkham Knight any day.
Read more
44 people found this helpful

Paul
3.0 out of 5 stars NOT Better than the Original
2 February 2019 - Published on Amazon.com
Platform For Display: PlayStation 4Edition: StandardVerified Purchase
This review contains minor spoilers!

So first off, I'd like to say that I love the game. It's a great survival horror experience and truly keeps you on the edge of your seat, whether it be fighting zombies, running from the Tyrant, or searching the dark halls of Raccoon City Police Department for ammo. It's polished and definitely delivers a home run to the horror genre. Also, anyone urged to play this by pure nostalgia should absolutely take advantage of the original 1998 soundtrack swap available during game play.

Now for the bad news... The changes in the story are too much to overlook. Most interactions between Leon and Claire have been removed, turning a once-interwoven story of two survivors into two disconnected playthroughs of the same events. It has nowhere near the amount of balance the original story possessed. A lot of things go unexplained that simple conversation between Leon and Claire could've put to rest. I'll also add that the game feels way too short, although, I do recommend playing through every scenario once for a grand total of 4 playthroughs.

All in all, I do enjoy the game. It really is nice to enjoy a modern version of the old-style survival horror that the Resident Evil franchise defined.
Read more
35 people found this helpful

Mechanized Manifesto
5.0 out of 5 stars Slow, creeping horror.
27 January 2019 - Published on Amazon.com
Platform For Display: PlayStation 4Edition: StandardVerified Purchase
The most fun I've had in a singleplayer horror game in a long time.

I played RE 1 and 2 when I was a kid with an OG ps1 back in nineteen ninety ... whatever. This game captures the nostalgia of that for me. The devs really did a great job with this game and deserve all the love. I can only hope that this will signal an re3 remake or at least a return to form for future RE games.

C'mon Konami. Give us a Silent hill remake.
Read more
37 people found this helpful
Go to Amazon.com to see all 465 reviews 4.5 out of 5 stars
Back to top
Get to Know Us
Connect with Us
Make Money with Us
Let Us Help You
© 1996-2021, Amazon.com, Inc. or its affiliates