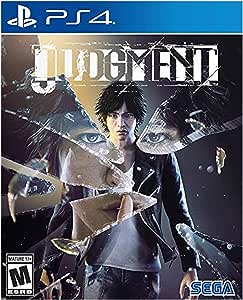 by SEGA
Platform : PlayStation 4
Secure transaction
Returns Policy
Your transaction is secure
We work hard to protect your security and privacy. Our payment security system encrypts your information during transmission. We don’t share your credit card details with third-party sellers and we don’t sell your information to others. Find out more
In stock.
Arrives: 2 - 6 Feb. Details
Ships from and sold by MplusL Germany, from outside Singapore. For information about products sold by international sellers, click here.

SEGA presents Judgment, starring one of Japan's most prominent actors, Takuya Kimura, in the dramatic tale of a disgraced lawyer seeking redemption in a world rife with corruption and despair.

Anthony C.
5.0 out of 5 stars Yazuka + Ace Attorney = Judgment
26 June 2019 - Published on Amazon.com
Edition: JudgmentVerified Purchase
I have been waiting on this game for quite some time... But does it really live up to the hype?

Answer? Yes, and so much more

This game is made with the new dragon engine, which was featured in yazuka 6 and again in yakuza kawami 2 so it looks really good graphics wise.

This story takes place 2 years after yakuza 6. While you may get small references to previous games (such as a mini game that is a reference to yakuza dead souls) , there will be no cameos or returning characters from the previous yakuza games. Seeing as your back in the yakuzaverse, your welcome back to a fresh new city of komurocho (note I only played yakuza 0 so far) It's really cool that you can just walk into buildings with actual interiors no loading screens this time.

We start as yagami, a private detective and an ex-lawer. He has a ex-yakuza member as his parter, so these situations with these two are pretty entertaining. You pretty much have to solve the mystery of why are yakuza getting killed with missing eyes. That's all I'll spoil but this story has plenty of plot twists, engaging drama.... As expected from this studio the story is just as good as yakuza 0.

Let me just say that the dub work for the english voices are fantasticly well done, of course for your yakuza purists there are japanese dubs and english subs as well as other language opinions for the subs. Sega really did good here compared to their last effort 12 years ago with dubing yakuza 1 was... Terrible to say the least.

So you fight in your typical yakuza brawler action with yagami. You have two styles, a tiger style that is used for single opponents or a crane style for multiple opponents. You can see that yagami isn't a tank, instead his fighting is more controled like an actual martial artist. He has ex actions of course in your typical yakuza fasion, he can also run up walls for cool combos. He also has an ex burst which gives him reduced damage and increase attack. Unfourntly the thing that stucks is these mortal wounds that yagami can get make is heath bar permanently shorter... And the only way you can get it normal again is to go to a clinic or these VERY expensive medical packs.

Of course it wouldn't be a yakuzaverse verse game if it didn't had mini games! So there are a bunch of new ones, raging from a VR Mario Party type game were you roll virtual dice in a virtual board to win prizes to drone racing.... Etc.. Just so much to do it's so much fun. Unfourntly no karaoke this time, but it's whatever.

There are more game mechanics I havent really mentions such as the detective work, friendships... Etc. But I don't want this review to be overbearing... Plus amazon likes to mess my reviews up, so lets leave it at that.

Verdict? 10/10 best yakuzaverse game since yakuza 0... Looks like I'll be wasting another 70 hours on this one too.
Read more
46 people found this helpful

Daniel L Carter
3.0 out of 5 stars Meh... still fun
12 August 2019 - Published on Amazon.com
Edition: JudgmentVerified Purchase
I've played the entire Yakuza series and I was hoping for just a little bit more from Judgement. It is definitely not its predecessor but, still fun to play. There isn't a lot of new aspects to the gameplay other than the drone racing (replacing the model race cars) and the focus is on investigating as a detective. My main complaint about the story is that the main character was a lawyer who had no prior experience as a street fighter, is somehow now an expert martial artist in just a couple years. They really could have come up with something to explain this better. He feels disgraced and shamed as a lawyer for getting a murderer off only to kill a woman right after being aquited... this somehow gives him motivation to quite and then become a badass martial artist detective? Not buying it! Would have been better if they gave an explanation that his family had been great martial artists or former Yakuza but, he chose to become a lawyer instead. At least that way you are given the impression that he knew how to or was trained in fighting growing up. That would have made more sense. He doesn't have to be the best fighter but at least it would explain him kicking arse and taking names.
Read more
8 people found this helpful

Vicdsnew
5.0 out of 5 stars Judgment is Perfection!
2 July 2019 - Published on Amazon.com
Edition: JudgmentVerified Purchase
This game is like a Yakuza game and it takes place in Kamurocho but it feels really different. The detective investigation parts are very engaging and entertaining. The story is top notch and like other Yakuza games there are so many things to do and discover like Arcade Games, bonding with people, drone races... The game is fantastic and I feel is my GOTY so far.
Read more

5.0 out of 5 stars Judgment is Perfection!
Reviewed in the United States on 2 July 2019
This game is like a Yakuza game and it takes place in Kamurocho but it feels really different. The detective investigation parts are very engaging and entertaining. The story is top notch and like other Yakuza games there are so many things to do and discover like Arcade Games, bonding with people, drone races... The game is fantastic and I feel is my GOTY so far.
Images in this review

Bryan
5.0 out of 5 stars At least as good as a main installment of the Yakuza series.
3 July 2019 - Published on Amazon.com
Edition: JudgmentVerified Purchase
For those who are unfamiliar, Judgment is a Yakuza series spinoff that could easily be considered the next installment. It builds off of the new engine from Yakuza 6 and Yauza Kiwami 2, adding in an additional fighting stance, and another new iteration of the famous Kamurocho.

What makes these games truly great is the combination of humor and drama, with real actors playing the roles of each major character. It might as well be a long-running TV series turned into a game. The variety of gameplay is staggering as always, with everything from old Sega arcade games to a modern beat-em up to racing drones.

The presentation this time is on par with the greatest AAA releases from the biggest budget studios, but the developers do it with a lot less funding. They reiterate on the same areas and concepts and gameplay designs to save on development costs. The downside could be that you may be bored of hanging around the same areas in every game, but somehow it works for them. Maybe it's the fact that it's a real city (Kabukichi) in Japan down to the last detail.

The developers had perfected their game formula, in most people's minds, with Yakuza 0. That game was using a very old engine, though. With the new engine, the games took a small step back in some ways, but the potential was there to build into something even greater. Finally, in Judgment, we're seeing it begin to return to full glory.

The game features variable difficulty, so there's something for you here even if you want to breeze through the combat.

Downsides here are few. You may find some aspects tedious, or you may be sick of Kamurocho by now. But ultimately, even if you just play the game for the story, you're getting a good story that's well acted.

Cory Robinson
5.0 out of 5 stars More Yakuza is Never a Bad Thing
27 June 2019 - Published on Amazon.com
Edition: JudgmentVerified Purchase
Got my copy in the mail yesterday, I have to say, the Yakuza team has yet again hit it out of the park. The game is fun, looks great, and still has that cozy feeling as you return to Kamurocho again. Definitely recommend picking this game up. From the engaging story to the solid gameplay, you won't be disappointed!
Read more
8 people found this helpful
Go to Amazon.com to see all 77 reviews 4.5 out of 5 stars
Free & fast delivery, movies and more with Amazon Prime
Prime members enjoy free & fast delivery, exclusive access to movies, TV shows, games, and more.
> Get started
Back to top
Get to Know Us
Connect with Us
Make Money with Us
Let Us Help You
© 1996-2020, Amazon.com, Inc. or its affiliates