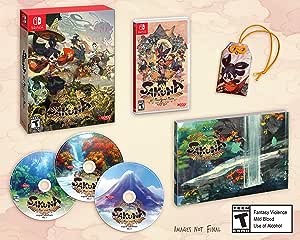 Secure transaction
Your transaction is secure
We work hard to protect your security and privacy. Our payment security system encrypts your information during transmission. We don’t share your credit card details with third-party sellers and we don’t sell your information to others. Find out more
New (3) from S$80.77

by Xseed
Platform : Nintendo Switch
3.0 out of 5 stars 1 rating
Secure transaction
Returns Policy
Your transaction is secure
We work hard to protect your security and privacy. Our payment security system encrypts your information during transmission. We don’t share your credit card details with third-party sellers and we don’t sell your information to others. Find out more
In stock.
US imports may differ from local products. Additional terms apply. Learn More.

Up in the opulent celestial capital of the Lofty Realm, the spoiled harvest goddess Sakuna whiles away her life in luxury, resting on the laurels of her late parents. Below in the Lowly Realm, a vicious mountain bandit chases a group of desperate humans to the edge of a cliff. A bridge between the two realms appears, and it is there that Sakuna crosses paths with the "children of men." In the commotion that follows, the goddess and the waylaid mortals cause a great explosion that earns them the ire of the celestial ruler, Lady Kamuhitsuki. She exiles them to Hinoe Island, a mysterious place bordering the earth and heavens that Sakuna's parents once called home, and commands them to reclaim the aptly titled “Isle of Demons” from the clutches of a monstrous horde. As the daughter of a warrior god and harvest goddess, Sakuna will rediscover her birthright in this untamed wilderness by weathering the elements, fighting monsters, and cultivating the soil. And by helping their immortal protector, the humans banished with her may yet find the reason to live that was stolen from them in the war-torn Lowly Realm. Together, these unlikely companions must join hands to tame both the soil and the demons of Hinoe Island. 'Divine Edition' contains a 3-disc soundtrack, a large 130pg artbook measuring 8.2” by 5.8”, and a Japanese omamori charm measuring 2” by 3”, all packaged within a custom box with exclusive illustration.

3.0 out of 5 stars
3 out of 5
1 customer rating
How are ratings calculated?
To calculate the overall star rating and percentage breakdown by star, we do not use a simple average. Instead, our system considers things like how recent a review is and if the reviewer bought the item on Amazon. It also analyses reviews to verify trustworthiness.

Jason
5.0 out of 5 stars Beautiful game!
13 November 2020 - Published on Amazon.com
Platform For Display: Nintendo SwitchEdition: Divine EditionVerified Purchase
The game is so beautiful! It's an easy 5/5 star game.

Amazon's package was horrible though. They put it in a bag, not a box. A collector's edition, which I wanted to put on display, got crushed. Not cool, Amazon. Not cool.
Read more
43 people found this helpful

Quinn Hanlon
1.0 out of 5 stars DO NOT BUY FOR SWITCH
12 November 2020 - Published on Amazon.com
Platform For Display: Nintendo SwitchEdition: Divine EditionVerified Purchase
It's an absolute train wreck (hyperbole). I flat out had to restart it in the opening cutscenes because the voice quality was so bad, swapped to Japanese voices, and it was still terrible quality as if they hard compressed the audio size to the extent it hurts to listen to. I've been on phone calls with higher audio quality. The trailers show them as having really nice audio quality for the voices so I have no idea what they did to somehow butcher it to this extent.

The graphics as well are extremely inconsistent. Sometimes the game will look really pretty and nice, but the next thing you know it'll be a cutscene of some sort with some abysmal graphics. Maybe it's because the graphics are designed to look good from afar but zooming in makes them look terrible, but I even noticed horrendous stuff in the opening cutscenes that made the GameCube look like a next-gen console.

The gameplay itself is really clunky and frustrating as the controls work against you, but it is filled with so much potential. The game feels like you're playing an early-access title in its testing stages of gameplay development where they still need to polish things and make the game feel good to play. This isn't helped by the fact that the game does quite poorly on explaining things well besides saying "Press button to do thing!" Combat is based on directional input, and you're extremely punished for ever using certain attacks accidentally since the delay after them is so long.

The user interface bugged me to no end as well. When characters are talking there will be a little tail off the end of the chat bubble that follows them and points toward their head. In the tutorial it was freaking out and swapping sides like its life depended on it, and even a few other places early in the game the tail would have a freak out not knowing where it was supposed to go. The chat bubbles also make your pinned task fade out/disappear, but it'll reappear every time a new bubble pops up only to fade out again. This is such a dumb feature that's extremely annoying and should have been fixed in development, but apparently they couldn't afford any play testers or quality assurance.

To make matters worse, the game flat out crashed on me, too, without letting me even save. Every time I felt like I'd gotten through the initial hurdles of the game to finally enjoy it, something else popped up to make me eat my words. I really, really wish that they fix all these things, but there's so much to be fixed that I don't foresee them fixing them. Definitely wait on this if you're planning on getting it for the Switch and look out for news of huge patches. I downloaded a patch before playing, but it clearly didn't fix anything (and possibly is what broke things in the first place, who knows?).

The Divine Edition comes with a 3-disc soundtrack which I didn't get the pleasure of cracking open to listen to since I'll be returning this , but that was the main selling point of the game to me. It came in a nice enough case and looks clean. The music I heard while in-game was one of the nicest parts, so I definitely place the Divine Edition as a must if ever purchasing the game. The art book has a ton of art (shocker) and I didn't look too close to avoid spoiling myself of the game, but its quality both felt and looked nice in my hands. There's also a little good luck charm that comes with it which I really liked and felt like a fun novelty.

All in all, I really do hope the developers somehow manage to scrape this together and make the game worth playing, but as it stands I feel like even 40 dollars for the base game is severely overpriced for the quality of its content. I love XSEED Games, and it hurts to see them release a product of this quality.
Read more
37 people found this helpful

Shadow Wolf720
5.0 out of 5 stars Extremely fun game
23 November 2020 - Published on Amazon.com
Platform For Display: Nintendo SwitchEdition: Divine EditionVerified Purchase
Package came in great condition. I wasn’t expecting this edition to be this big The Gameplay is extremely fun no problem whatsoever with the game. There is nothing special inside the pouch just card bored.
Read more

5.0 out of 5 stars Extremely fun game
Reviewed in the United States on 23 November 2020
Package came in great condition. I wasn’t expecting this edition to be this big The Gameplay is extremely fun no problem whatsoever with the game. There is nothing special inside the pouch just card bored.
Images in this review

Anonymous Reviewer
5.0 out of 5 stars Secret of Mana meets Rune Factory....in Japan
14 November 2020 - Published on Amazon.com
Platform For Display: Nintendo SwitchEdition: Divine EditionVerified Purchase
5 stars for the original concept alone. It brings something new to the farming sim genre that has been repetitive and stale to me for a while. The scenery and music are amazing. It’s a good game for people who like games like Rune Factory (farming sim and action aventure hybrids).
The Divine edition was worth the extra money to me. The soundtrack is beautiful, traditional Japanese music. The art book is much better than expected. The charm bag is a nice bonus.
You can adjust the difficulty setting for fighting and farming, so it can be suitable for kids too. My 5 year old has made it pretty far on the easy setting to put it in perspective.
I look forward to further releases by the small team that made this. Other farming / action adventure games in other foreign lands would be nice (Norse, Mayan, Egypt, the moon....so many possibilities).
The regular edition is priced $20 less than a AAA title, which seems fair considering this isn’t exactly Zelda BOTW. But it’s a groundbreaking game I’m it’s genre for me concept wise, and it’s the best indie game I’ve played by far.

QuesterDaniel
2.0 out of 5 stars Game is good, but Divine edition is a joke
27 November 2020 - Published on Amazon.com
Platform For Display: Nintendo SwitchEdition: Divine EditionVerified Purchase
Game is very fun, this never is an issue to this game. One issue related to game itself is audio is way too compressed.

But divine version, especially the cd is a complete joke.
All 3 cds are resampled garbage from compressed source. And some of them with really poor quality (128kbps). Basically there is zero value about the cd itself.

Even though it's only 20 bucks more, but for collection purpose, there is pretty much no value for it.
Read more
15 people found this helpful
Go to Amazon.com to see all 56 reviews 4.4 out of 5 stars
Back to top
Get to Know Us
Connect with Us
Make Money with Us
Let Us Help You
© 1996-2021, Amazon.com, Inc. or its affiliates