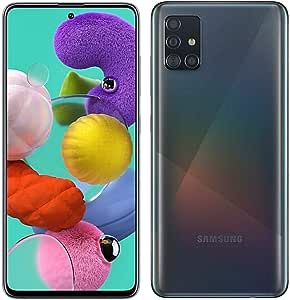 A51's Infinity-O Display optimizes visual symmetry. Now you can game, watch, surf, and multi-task without interruption on a 6.5" FHD+ widescreen display—all powered by Super AMOLED technology. Enjoy a smartphone experience that minimizes the bezel and maximizes each inch of screen space. The rhythmical pattern of A51's design theme comes in smooth and elegant pastel shades including Prism Crush Black, White, Blue and Pink. A premium gloss finish adds the perfect touch of style to its sleek and slim body, perfectly blending of style with in-hand comfort. Go ultra high-res with a 48MP Main Cam for crisp, clear photos day and night. A 123° 12MP Ultra Wide Cam captures more of the view.

Andre Lebron
1.0 out of 5 stars False advertisement only has 4 gigs of RAM not 6
31 December 2019 - Published on Amazon.com
Colour Name: Prism Crush BlackSize Name: 128 GBVerified Purchase
This is false advertisement it's not 6gb of RAM it only has 4gb very upset I would put a negative 5 because I don't like to get ripped off so buyer beware and also like to add the Box wasn't sealed it with no stickers and barely any information on the box about the spec's very suspicious
Read more
408 people found this helpful

Will change review
if something is done EDIT: THEY CHANGED IT TO NOT SHOW 6GB BUT CHARGE SAME PRICE FOR 4GB

Daisy S
5.0 out of 5 stars Works great in the US on AT&T LTE. Excellent phone! Detailed review.
12 March 2020 - Published on Amazon.com
Colour Name: Prism Crush BlackSize Name: 128 GBVerified Purchase
Well, I purchased this Samsung A51 to replace my Samsung A50 because after the A50 updated to Android 9 Pie and January 2020 security update the battery life of A50 went way down by about 50 percent of what it was. So I bought the A51 (SM-A515F).
This model is greatly improved battery wise it is superb! (See below)...

PROS:
1)LTE works great and has all the necessary data bands to run LTE on my AT&T Service. I travel, so at different locations, AT&T Cell Towers have different bands, at home, I receive Band 2 (LTE/4G+). Around town I am on, bands 2,4,5 and sometimes Band 17 depending on the tower location. Even on the road, my Data works great and it is very fast!

2) WIFI...This is a super strong WIFI. I get 5 bars all over my home and outside in back yard, 4 bars. The WiFi is super fast and stays connected!

3) Storage Space and Battery Life...After the OS, Factory apps and after installing MANY LARGE APPS, I still have 109 GB left out of the 128GB, so I am very happy!
Read more
130 people found this helpful

Kyle Anwyl
5.0 out of 5 stars Great mid-range phone for the price!
4 March 2020 - Published on Amazon.com
Colour Name: Prism Crush BlackSize Name: 128 GBVerified Purchase
I purchased the 128GB with 4GB ram model in all black. My wife's S8+ that was close to becoming non-functional and I needed a new phone asap. I had previously purchased an A20s for my son and so I first ordered the A30s until I did some research regarding my mobile provider T-Mobile in the US.

Now with that primary consideration out of the way, on to the rest of the review. I'll start with the best parts first.

1. Call quality, reception and connectivity
The call quality is excellent on this phone, right up there with my s10+. I think the microphone quality has been improved because my wife loves using the speakerphone and on her hold s8+, her voice occasionally cut out here and there as the mic tried to pick up her voice. Also, the sound quality of the voice has improved as well which further helps to understand the conversation. Reception has been about the same compared to my s10+, which is to say pretty good. We measured on signel strength and asu. The mobile data speeds are excellent even in areas that are typically weaker in signal strength.

2. Screen
Samsung AMOLEDs are the best in the business when it comes to screen quality. We are a little relieved the screen is not curved because this allows us to get a robust case to protect everything. The colors, quality and resolution are all indistuingishable compared to my s10+. The front camera is a tiny pinhole so the entire body is pretty much all screen. There is an in-screen fingerprint reader which is optical, rather than infrasonic on my s10+ but it is still reasonably fast to unlock the phone. Yes it is slightly slower than my s10+ but we're talking milliseconds of difference.

3. General usability
My wife is not a gamer so I can't say anything about the gaming experience but she does use a ton of media and productivity apps. For all of her use on them so far, she says they feel snappy. They all open fast and transition well and she multitasks as much as before without a shred of difference. When we first setup the phone, we were concerned because there was some UI lag but realized a lot of processing was being used during the Samsung Switch, which transfered her entire old phone to the new phone. Once the switch was done, we rebooted and the phone was responsive and fast.

4. Camera
The camera hardware has some beefy specs. But for a mostly point-and-shooter, it's hard to really go wrong many camera setups. Picture quality looks great in the light and not as good in the dark compared to my s10+. The slower camera speed is noticeable, transitioning between the main camera/wide/macro takes about a half second, where on my s10+ is pretty much instant. The shutter is just as fast, luckily. If camera speeds are important to you, you would probably not be happy with this phone.

5. Battery
I have to admit, we were looking forward to getting more usable time out of the battery. The battery is 4000mah unit and the s8+ was only 3500mah. However, through the typical daily use, we found that the end-of-day percentage left were about the same. We average about 4 hours of on-screen time scattered throughout the day with app use and web-browsing and the battery was around 40% left, which is the same as the s8+. If long battery life is important to you, you would not be happy with this phone but keep in mind, it can easily last an entire busy day on a single charge.

Overall, we like the phone for the price of under $300.
Read more
110 people found this helpful

rothnic
5.0 out of 5 stars LTE works with T-Mobile in US
22 January 2020 - Published on Amazon.com
Colour Name: Prism Crush BlackSize Name: 128 GBVerified Purchase
LTE working on T-Mobile in US with Mint mobile, after configuring APN!

Great budget phone with a fantastic screen and pretty decent camera, and enough ram for the typical person.
Read more
92 people found this helpful
Go to Amazon.com to see all 229 reviews 3.8 out of 5 stars
Free & fast delivery, movies and more with Amazon Prime
Prime members enjoy free & fast delivery, exclusive access to movies, TV shows, games, and more.
> Get started
Back to top
Get to Know Us
Connect with Us
Make Money with Us
Let Us Help You
© 1996-2020, Amazon.com, Inc. or its affiliates