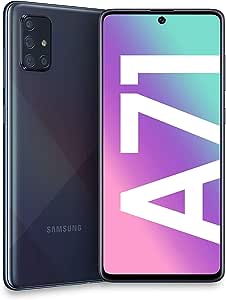 Neal F
5.0 out of 5 starsGreat Phone!
2 March 2020 - Published on Amazon.com
Verified Purchase
After looking at many phones to replace my old Samsung Galaxy Note 3 which was becoming problematic, I decided on this one. Even though it wasn't like the Samsung Galaxy Note 10+, which my wife got for Christmas from Verizon which had a great deal going on, this phone to me was also a great deal because I only paid $355 for it. I have T-Mobile service and this phone works perfectly with my carrier. The description was accurate for it also. Plenty of internal memory 128gb, I have a 64gb micro sim in it, it's also running Android 10. So far, so good! Big display, and I'm getting used to all the features that it offers. Nice camera also with lots of options. Battery life is one of the best features of this phone. 4500mAh, enough for the whole day and then some. I haven't used the face recognition or the fingerprint reader yet, but don't expect any problems with those anyway. Seems like I made the right choice! There's nothing wrong with getting an international phone either. You shouldn't be stuck having to get a phone from one of the US carriers, that limit your selection, and has you paying higher prices. Even though this phone is Samsung's mid level "a" series, your saving a bunch of money and in my opinion, won't even notice any differences. The only problem that I had, however, was that when I received the phone the shipping box wasn't packed properly and when I opened the box, the phone was laying outside of it's box and so were most of the accessories that it came with! I immediately contacted Amazon, and the customer rep fully understood my concern, and told me that for any reason I could return it within 1 month for a full refund. But in conclusion, I set it up, it works fine and I'm having a good time with it. Enjoy!! I read some of the other reviews posted, and can't believe what some people have said. One review said that the phone is not 4G, it definitely is. Even if it doesn't show a "4G" icon on top, it is. Mine says LTE or LTE+. If you google it, that is 4G. In another review, the person mentioned that the battery only lasts half a day and gets very hot. My phone lasts for about a day in a half and I have no issue with excessive heat. Again, for less than $400, you can't go wrong.
Read more
98 people found this helpful.

yinibot
5.0 out of 5 starsLove love love!
11 March 2020 - Published on Amazon.com
Verified Purchase
So far, so great! I am in love with the A71!! The screen is awesome, it charges super fast and the battery life is superb! The camera takes great pics and the call quality is perfect. I posted some photos that I have taken to show the quality.
Read more
85 people found this helpful.

rj.p_photography
4.0 out of 5 starsAlmost perfect phone.
9 March 2020 - Published on Amazon.com
Verified PurchaseEarly Reviewer Rewards(What's this?)
At the time when I was looking to buy this phone, there wasn't a lot of reviews for this phone except for the Samsung a51 (the little brother) and YouTube channels that got early access to this phone. Most all channels mention how the material, glastic, on the back of this mid tier phone felt cheap and wasn't on par with the usual metal to glass build on flagship phones. I would have to disagree. To me it felt fine and even feels better to hold in my hand. YouTube channels also mention how big this thing is and because of that it was too bulky and big for comfort. To me (a small Filipino) the size of this phone wasn't terrible to hold at all. I can handle the weight with ease without any discomfort even if I'm on it for long periods of time. It really isn't that heavy. As for navigating the phone, I had to learn that I won't be able to do one-handed on this beast. I don't do one-handed operations on mobile devices, most of the time, anyway. But watching movies or shows with one hand is no problem. I was worried because when I first took a look it this thing, it was longer than most all phones I've seen as of yet, an exception to Sony's newer flagship devices.

The 'punch hole' or so they called it is at a better location than the previous iterations of the Samsung Galaxy series (S10, S10 Plus, S10e). The cameras on the back are protruding so laying it flat on a surface, camera down, is a big discouragement if you don't plan on putting a case on it. As for quality it's a much better camera than my previous Samsung Galaxy Halo. And it's on par if not better than the iPhone X especially in low lighting. Selfie camera is super great but it doesn't do well in lower lighting.

Overall, I really do love this phone. It's body to screen ratio is one of the best I've seen in the market (especially when it has the hole punch display). The bezels are barely there. The screen is great but could be brighter during sunny days. The Samsung Galaxy a71 is light weight and is packed full of features (like NFC so you can pay with your phone) and not to mention its 400$, half the price of a flagship phone that has these features. So if you are looking for a budget phone packed full of features and don't mind it being 'glastic' then this is a phone for you!

kmrotterdam
4.0 out of 5 starsThe Best Mid-Range phone in my opinion
25 April 2020 - Published on Amazon.com
Verified Purchase
OMG, I have gone through about five phones this year, in my quest for the perfect device for me. We use our phones for so much: calling, texting, movies, surfing the internet, listening to music, taking photos, reading books, paying for things at the cash register, and so much more -- it is the hub of our digital lives. Yet, I do not want to spend $1K on a new phone. This seems to be the best mid-range phone so far. I use Cricket, and it picks up all Cricket LTE signals well (which are At&t towers). It has NFC, so I can pay using contactless payments (especially important during this corona epidemic). The cameras are among the best in the price range, and compares to my much more expensive flagship phone (Huawei Mate 20 Pro); it is amazing how technology advances so quickly in a year.
What is NOT to like about this phone: the face ID is useless; it rarely works!! I mean rarely. The fingerprint ID works MOST of the time; I would say 2 out of 3 attempts, and it is slow: the slowest onscreen fingerprint reader that I have used with this features over three other recent phones. Samsung is definitely finally addressing the mid-range market, and this is their best attempt so far. Although it is not speficially destined for the US market, it has all the bands for US GSM carriers (sorry, you're out of luck with Verizon, Sprint, and other CDMA carriers -- why do some carriers in the US use CDMA??? hardly no one in the world uses that). Anyways, I love the BIG 6.7 inch Super Amoled screen. The speakers are decently loud, too.
Read more
33 people found this helpful.
Go to Amazon.com to see all 130 reviews 4.1 out of 5 stars
Free & fast delivery, movies and more with Amazon Prime
Prime members enjoy free & fast delivery, exclusive access to movies, TV shows, games, and more.
> Get started
Back to top
Get to Know Us
Connect with Us
Make Money with Us
Let Us Help You
© 1996-2020, Amazon.com, Inc. or its affiliates