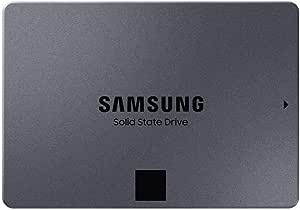 Capacity: 1TB | Pattern Name: יחיד
Technical Details
Additional Information
Feedback
Would you like to tell us about a lower price?
If you are a seller for this product, would you like to suggest updates through seller support?

Step up to ssd-level performance. The 860 qvo gives you huge, terabyte storage and the incredible speed and reliability of an SSD.

Orion
5.0 out of 5 starsPerfect 1TB drive...
17 February 2019 - Published on Amazon.com
Capacity: 1TBPattern Name: יחידVerified Purchase
I've never had a 1TB ssd, although I've had 256gb and 512gb drives all of different makers, but I figured if I was going up to 1T I'd go Samsung.

I cloned my 512gb Mushkin to the Samsung drive w/o a problem using Acronos True Image 2019 instead of the Samsung Magician software that you can download.

Put the Samsung in as the boot drive to see if it would boot and the PC booted right up...I booted the drive several times to see if there were any problems but there were none.

I then erased the 512gb drive and will use it as my second drive putting Linux 19.1 Mint on it giving me a dual boot system.

Customer
4.0 out of 5 starsA troublesome installation. Hope to see good performance going forward.
19 January 2019 - Published on Amazon.com
Capacity: 1TBPattern Name: יחידVerified Purchase
Since this SSD includes absolutely no installation instructions, outside of the most unhelpful diagram ever, if you just want an extra drive to run certain stuff more quickly one, rather than migrating data. Thankfully, I am a software engineer... which meant I had no idea what to do. So I contacted support. It's 3 am, I didn't expect much. Restarted a couple times. Tried rewiring the sata cables (which it didn't come with, by the way...kinda inconvenient). Nothing.

So, finally, about to give up I right clicked on "This PC" in File Explorer, hoping to find something of note. I found Manage. Navigated to Disk Management, and waited for a moment. Finally, it was shown that the new SSD was not formatted. Like literally at all. So I just did that, and now it shows up in file explorer. yay.

After a few tests, it says that it's downloading and moving files at around 1 MB/s, where the other components are now bottlenecking it. So...all in all...looks good for a hard drive.

EDIT: However, running programs on this SSD seems to be severely harming my CPU performance. I can't seem to fathom why. Sometimes it even tops out my CPU to 100% playing League of Legends, which is just the oddest thing, as it never went beyond 20% before migrating it over to SSD. Perhaps the drive has a high miss rate, and is forcing the CPU to continuously query the drive?
Read more
185 people found this helpful.

del72
5.0 out of 5 starsGreat SSD for the price! Good for PS4/PS4 PRO or beginner PC.
5 March 2019 - Published on Amazon.com
Capacity: 1TBPattern Name: יחידVerified Purchase
I Brought this SSD for my PS4 PRO and my load times are faster and the home screen is very zippy now I did my research as I do with anything I spend over fifty dollars on and it has a lot of positive reviews and please ignore any reviews that are PC related about this SSD because your PS4 or PS4 PRO are not going to push this drive like a PC would but on the other hand I've heard it's really good for anyone with a simple starter PC so to each it's own but all in all it's a great drive for a excellent price with a trusted name like Samsung to back it.
Read more
174 people found this helpful.

Yuri Poghosyan
3.0 out of 5 starsSamsung Magician can deceive benchmark utilities
16 March 2019 - Published on Amazon.com
Capacity: 1TBPattern Name: יחידVerified Purchase
Here are screenshots from different benchmark programs. Initially, screenshots with RAPID enabled, then the same screenshots, but with RAPID disabled. And at the end is the most important screenshots made by HD Tune Pro 5.70, which is the most reliable and objective, and here the numbers are very pitiable. I also note that if the system already has a Samsung SSD, then the RAPID mode cannot be enabled on the second SSD. You will need to choose on exactly which to enable it. I would not recommend buying this SSD (translated by Google)
Read more
118 people found this helpful.

Delphimpd
5.0 out of 5 starsWow!!!! I should have done this a long time ago!!
25 March 2019 - Published on Amazon.com
Capacity: 1TBPattern Name: יחידVerified Purchase
Ok. I have always been skeptical about these hard drives, I found this drive in a good deal state and I made the switch.
Ok, So when I got the drive I bumped into a problem which first I didn't have the cable to clone, so I had to order one here. the second bump was when I was ready to transfer I realized that the old drive was larger in gigabytes than this one, but no problem I downloaded a free clone software who gave me the option to clone a larger drive to a small drive. The downside of the process was that it took approximately 6 hours for the process to complete, but boy, if I was happy, My laptop now it takes literally 5 seconds from pressing the power button to full desktop, It is an amazing blast speed.
Read more
113 people found this helpful.
Go to Amazon.com to see all 1,319 reviews 4.7 out of 5 stars
Free & fast delivery, movies and more with Amazon Prime
Prime members enjoy free & fast delivery, exclusive access to movies, TV shows, games, and more.
> Get started
Back to top
Get to Know Us
Connect with Us
Make Money with Us
Let Us Help You
© 1996-2020, Amazon.com, Inc. or its affiliates