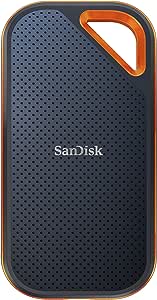 by SanDisk
5.0 out of 5 stars 3 ratings
Secure transaction
Returns Policy
Your transaction is secure
We work hard to protect your security and privacy. Our payment security system encrypts your information during transmission. We don’t share your credit card details with third-party sellers and we don’t sell your information to others. Find out more

Finish First with Powerful SSD Performance: From the brand trusted by professional photographers worldwide, the SanDisk Extreme PRO Portable SSD provides powerful solid state performance in a rugged, dependable storage solution. Nearly 2x as fast as our previous generation! Fast and Dependable: Get powerful NVMe solid state performance featuring 2000MB/s read/write speeds in a portable drive that's reliable enough to take on any adventure. Work Faster and Longer: Save time storing and transferring data with the forged aluminum chassis that also acts as a heatsink to deliver higher sustained speeds. Travel Worry-Free: Get peace of mind when you're out in the world thanks to a 5-year limited warranty and a forged aluminum chassis-silicon shell combo that offers a premium feel and added protection. Tough Enough to Take with You: Up to two-meter drop protection and IP55 water and dust resistance,5 and a handy carabiner loop for securing to your belt or backpack all make this drive rugged enough to take anywhere. Encryption for Extra Security: Help keep private content private with the included password protection featuring 256 bit AES hardware encryption. Professional-Grade Storage: From SanDisk, the brand professional photographers worldwide trust to handle best shots on their toughest assignments. Storage capacity: 2 TB.

5.0 out of 5 stars
5 out of 5
3 customer ratings
How are ratings calculated?
To calculate the overall star rating and percentage breakdown by star, we do not use a simple average. Instead, our system considers things like how recent a review is and if the reviewer bought the item on Amazon. It also analyses reviews to verify trustworthiness.

PatrickSG
4.0 out of 5 stars About SanDisk Extreme PRO SSD 500GB; read speed up to 1050MB/s** (NOT)
2 November 2019 - Published on Amazon.com
Verified Purchase
I was previously using SanDisk Extreme SSDs (1TB and 2TB) and then purchased this Extreme PRO SSD of 500GB capacity, thinking I would get around 1000MB/s read speed, but it's not. Surprisingly write speed is more than the read, 913 MB/s write against 886 MB/s read.
Made it extreme portable using USB-C to USB-C 3.1 gen 2 flex cable and slim mouse holder. You can get both here at Amazon:
Cable: https://www.amazon.com/dp/B07PRLJKJP
Mouse Holder: https://www.amazon.com/dp/B07SRZMN48

4.0 out of 5 stars About SanDisk Extreme PRO SSD 500GB; read speed up to 1050MB/s** (NOT)
Reviewed in the United States on 2 November 2019
I was previously using SanDisk Extreme SSDs (1TB and 2TB) and then purchased this Extreme PRO SSD of 500GB capacity, thinking I would get around 1000MB/s read speed, but it's not. Surprisingly write speed is more than the read, 913 MB/s write against 886 MB/s read.
Made it extreme portable using USB-C to USB-C 3.1 gen 2 flex cable and slim mouse holder. You can get both here at Amazon:
Cable: https://www.amazon.com/dp/B07PRLJKJP
Mouse Holder: https://www.amazon.com/dp/B07SRZMN48

bryce
5.0 out of 5 stars Photographers perspective
28 January 2020 - Published on Amazon.com
Verified Purchase
Similar to the 550mb/s drive. This one is faster but not by a huge amount. The main difference is that with transfers over 70gig or continuous use - like with an Xbox etc. it has a better heat dispersion. So there is no speed throttle after longer use. It maintains speed throughout the transfer and doesn’t drop once it warms up. For that reason alone I recommend spending. With regular chronosync sessions it won’t take more than 3 minutes for a full 75 gig session. Epic.
Read more
90 people found this helpful

Steven
5.0 out of 5 stars Amazing little durable external SSD, but M1 Mac Minis don't use it to its full potential
7 December 2020 - Published on Amazon.com
Verified Purchase
I'm a tech nerd who does music production using Logic, so I bought a base model Mac Mini as a secondary computer just for fun and testing. I turned my living room into a secondary studio and plugged my Mini into my 65-inch OLED. The experience is great, it's very nice to sit back on the couch with a compact MIDI controller and bang out some scratch projects in Logic. The drive is plenty fast! It's actually faster than the main drive on my main MBP (2014 15-inch maxed out Pro), so I can't complain. Since I bought the absolute cheapest base model M1 Mini, I'm using this as the main drive for all my projects, and it still functions really well for that despite being gimped by the Mac.

The problem is that you lose about half the performance on the new M1 Macs. I did my research, or thought I did, and the way Apple markets the Thunderbolt/USB ports on this computer is confusing and I should have read the fine print. It markets these ports as Thunderbolt / USB 4.0, which should run at 40 Gb/s, but in reality it only operates at 40 Gb/s with Thunderbolt 3 devices, under USB it actually runs at USB 3.1 Gen 2 specs, which operates at 10 Gb/s. This is quite misleading (shame Apple!).

This being said, that means I'm only seeing about half the performance, or somewhere around 890/840 MB/s write/read respectively. While this is still quite fast, and is even fast enough to edit 4K RAW Cinema files at 60 FPS, it's still gimped. I tested this on a friend's computer who has true USB 4.0 and it's BLAZING fast at well over 1700 MB/s both read and write.

In the end, I cannot fault this drive for Apple's misleading marketing. Under the right conditions it performs close to spec. I'm still going to keep it though because I'll be upgrading this computer in probably a year or so and hopefully by then I'll have full USB 4.0 compatibility. Just be warned that M1 Macs aren't ready for the Pro level newer gen drives (and don't blame the drive for this if you make a mistake like I did).

If you are buying this for a current generation M1 Mac then buy the non-pro version, you'll get way more bang for the buck and the read/writes will be the same. Only buy this if you're planning on further upgrading really soon as I am, or if you have a device that can actually take advantage of this SSD.
Read more
52 people found this helpful

J Scott
4.0 out of 5 stars Great Device. Horrendous Customer Care.
5 November 2019 - Published on Amazon.com
Verified Purchase
I use this with my iPad Pro 11 and it is amazing. I am able to edit large video files for long periods of time without eating up my on-board storage. It does heat up quickly when in use but only to a point then it maintains its that same temp for at least a couple of hours. That is the longest I have used this continuously. If you do run into any problems (not that you will) you are better off researching it and figuring it out on your own though. Their customer support is absolutely useless. Don’t let the complimentary flashback offer influence you either. It is a gimmick to try and get more money from you that doesn’t work anyway. Get the device, just skip the customer service and Flashback offer. This is just a very capable piece of hardware for you to use with no real support. The only reason it didn’t get 5 stars.
Read more
58 people found this helpful
Go to Amazon.com to see all 319 reviews 4.2 out of 5 stars
Back to top
Get to Know Us
Connect with Us
Make Money with Us
Let Us Help You
© 1996-2021, Amazon.com, Inc. or its affiliates