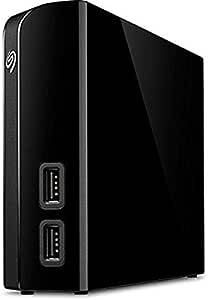 by Seagate
4.7 out of 5 stars 7 ratings
Amazon's Choice recommends highly rated and well-priced products.
Amazon's Choice for "10tb"
International product from outside Singapore
8 new from S$263.77

Capacity: 10TB | Style Name: Hub
Technical Details
Additional Information
Feedback
Would you like to tell us about a lower price?
If you are a seller for this product, would you like to suggest updates through seller support?

The Seagate Backup Plus Hub drive optimizers external storage with simple file backup for your computers and mobile devices and an intelligent USB hub to charge and manage your USB-connected devices. High-speed USB 3.0 and 2.0 connectivity offers plug-and-play functionality on your PC. The drive is formatted for Windows computers. Install the provided NTFS driver for Mac on your Mac computer, and you can use the drive interchangeably between Windows and Mac computers without reformatting. The two front-facing intelligent USB 3.0 ports amplify the functionality of your drive by allowing you to charge and connect two external devices, like your phone, tablet or camera - even if your computer is in off/standby mode. Back up your favourite files, photos and video from your PC using downloadable Seagate backup software. Run a one-click backup or schedule an automatic backup plan to protect your files in your Backup Plus Hub drive at your convenience.

larry leong
5.0 out of 5 stars Best way to increase number of USB on your nas
1 January 2020
Capacity: 10TBStyle Name: HubVerified Purchase
Works as advertised. Bought this and the Seagate 8th backup drive. The power supply of this unit is much bigger and heavier than the 8tb version. I believe the extra weight is to support bigger amp requirement. I attached 2 external hdd , and connect the 10tb to my nas
Read more
Helpful
Comment Report abuse

Richard Tan
4.0 out of 5 stars That the product is good and relaible .
12 December 2019
Capacity: 8TBStyle Name: HubVerified Purchase
The product , so far it is good .
Read more
One person found this helpful
Helpful
Comment Report abuse

WJames
1.0 out of 5 starsI would happily destroy it upon receipt of a new replacement
26 February 2018 - Published on Amazon.com
Capacity: 6TBStyle Name: HubVerified Purchase
I accepted delivery of a Seagate Backup Plus Hub 6TB External Desktop Hard Drive Storage STEL6000100 from Amazon.com on December 20, 2017. For a period of about 30 days it performed as expected. Quiet and dependable. However, beyond that point, my HP Pavilion Desktop 570-p094 running on Windows 10, failed intermittently to recognize the drive. Upon restarting my computer, the problem seemed to self rectify. This condition persisted for several weeks. Lamentably, shortly thereafter, the drive began making grinding and chattering noises. After which point, my computer no longer recognized the drive. I have attempted to utilize "SeaTools for Windows" to no avail. It also failed to detect the drive. Additionally, I unsuccessfully attempted to initialize the drive with any of the available USB ports on my computer. The drive is neither detected within the Device Manager nor Disk Management.
I have had several rounds of emails with Seagate Support which ultimately concluded with the recommendation of returning the drive for replacement. Seagate stipulated though, as follows: "Please be advised, Seagate may replace your product with a product that was previously used, repaired, and tested to meet Seagate specifications." Not much comfort there, considering that the new unit that I purchased presumably also met Seagate specifications. I do not find it acceptable that I should have to front the cost of return shipping. Nor do I feel any confidence in the security of my personal data contained on the drive should I return it to Seagate. The only resolution that I would find acceptable would be to have Seagate send a new drive to replace the doorstop that I now own. I would happily destroy it upon receipt of a new replacement. But then there is the reality of the personal data that is now lost.

I do not write reviews. However, to this I am making an exception due to the sudden, complete, and catastrophic failure of this drive. As a consequence, I have lost irreplaceable photos and documents. Common wisdom advises the back up of data. This was precisely my reason for the purchase of this drive. I backed up the internal hard drive of a computer that I recently whiped and discarded. Back-up the back-up the back-up? Where does it end?

Do a bit of research before buying this product. You will find independent reviews that determine that some Seagate products are unreliable, defective, and (fail) prematurely at spectacularly, and in many respects, unprecedentedly high rates. That is most certainly true of this product. At the time that I am writing this review, nearly 150 of the 1,151 Amazon customer reviews are solidly negative. This drive should stop shipping until the manufacturing defects are corrected.

Every component of my budget system operates flawlessly with the exception of this pathetic device.

Please read the warranty and take the negative reviews seriously.

I've been using this for 21 months to back up my MacBook Pro hourly with Time Machine. No problems at all, still works (and sounds, thumpety thump) like it has from the start.

The Backup Plus Hub series appears to consist of SMR (Shingled Magnetic Recording) drives. We know the 8 TB version is SMR because another reviewer (Pacific coast) opened it up (voiding his warranty) and found a Seagate Archive drive, which is SMR. I asked Seagate if the 6 TB version I got is an SMR drive, and they said "Unfortunately, we do not have this information available." Ha ha! Their reticence is understandable, the more common PMR (Perpendicular Magnetic Recording) technology is generally preferred. The prices of these Backup Plus Hub drives are less than Seagate's bare PMR drives of equal capacity, which also supports the idea that the Backup Plus Hub series is SMR.

SMR technology allows more physical bits of memory in the same space without decreasing the size of the bits.

-- Slower random writes. SMR drives use large write heads relative to the width of the tracks of bits, so writing one track affects the next tracks of bits too. This limits SMR drives to sequential writing, where the next tracks don't matter. To do random writes (such as changes to data on the drive already), data must be arranged sequentially in cache, by the drive in this case, and entire sections of the drive must be rewritten sequentially. Some of this can be hidden by the use of large cache on the drive, believed to be 20 GB or more on Seagate SMR drives. Data can be written quickly to cache and then rewritten more slowly to another part of the drive.
-- Highly variable sequential write speeds, due to the particular ways the drive manages where to put data.

Read speeds aren't affected as much.

The consensus about SMR drives is that they're well suited to backup use, which is reflected in the name of this series of drives. They probably aren't as suitable to use as a main drive to run a computer from, and are generally *not* recommended for RAID configurations (which wouldn't be likely uses for a single external drive anyway).

The 6 TB version of this drive hasn't been tested by professional reviewers, but the 8 TB version has tested very well in standard benchmarks in numerous professional reviews, often well over the 160 MBs maximum rate claimed by Seagate. It's been more variable in practical use. I'm unable to test it myself with a USB 3.0 connection, but one professional reviewer who did got an average of 72 MB/s for a write of a little under 90 GB of files. That's a little over 20 minutes. (A customer review here--Pacific coast again--gets a similar 75 MB/s.)

[Update December 2018: Someone asked for speed test now that it's two years old, and since I have a USB 3.0 connection for it now, I was able to test it at full speed. For 20GB of photos from my MacBook Pro it took right about 3 minutes, or 110MB/s write speed. To copy them back took just over 2 minutes, about the rated 160MB/s read speed. I've only used 450GB of the 6TB capacity, so it's not congested yet.]

Differences between Windows and Mac versions

According to Seagate, the only differences between this Windows version and the Mac version of the Backup Plus Hub series are the initial formatting of the drives and the cosmetics of the cases. The formatting can easily be changed at home, so buy whichever drive you please for either OS.

-- Doesn't run too hot. I've seen measured temps of 100 and 113 degrees inside, which is fine for a hard drive.
-- A little noisy when operating, not any worse than most computers.
-- No fan, has passive cooling through vents on the bottom.
-- Includes USB 3 (or 2) cable, type A to micro-B.
-- 2-year warranty.
Read more
1,727 people found this helpful.

Finny
1.0 out of 5 starsSeagate Unit and Warranty POOR
30 August 2017 - Published on Amazon.com
Verified Purchase
I know one can get a "lemon" sometimes, but how Seagate's customer service dealt with the matter left me discouraged. Seagate states they provide a 2 year warranty, but let me share with you my experience in dealing with the dead drive covered by support/warranty ... The product was purchased about 90 days ago, but was not used for several weeks; and thereafter, usage was light (for example, Time Machine backups for a couple laptops). Then after about 2 months of use it died last week. I attempted to locate another adapter to confirm that the adaptor was not the issue, but was unable to locate the unique one that comes with this unit (Seagate power supply: 12V 3A / barrel outside 5.5mm inside 2.5mm center positive). Therefore, I contacted customer service regarding the matter and they asked me to purchase one to test their drive. Yes, they wouldn't send me a replacement adaptor to test their product, but rather wanted me to purchase one. So with that support interaction, I elected to return the unit under their product warranty coverage. That is when I was informed that they only warranty the product and DO NOT cover sending the product back to them to replace. And BTW, their warranty replacement unit will be a refurbished unit, not a new one ... another surprise in warranty coverage. Today I mailed the drive to Seagate, and my wallet is another $20+ dollars lighter ... YIKES. Therefore, due to the experience of the unit's life (60 days with light usage) and Seagate's support/warranty, I have to rate this product a ZERO!
Read more
929 people found this helpful.
Go to Amazon.com to see all 2,292 reviews 3.9 out of 5 stars
Free & fast delivery, movies and more with Amazon Prime
Prime members enjoy free & fast delivery, exclusive access to movies, TV shows, games, and more.
> Get started
Back to top
Get to Know Us
Connect with Us
Make Money with Us
Let Us Help You
© 1996-2020, Amazon.com, Inc. or its affiliates