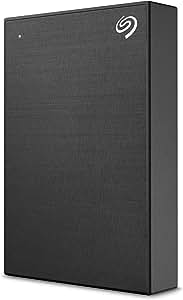 Store and access 5TB of photos and files on the go with Seagate Backup Plus Portable. The perfect compliment to personal aesthetic, it features a minimalist brushed metal enclosure and quick plug-and-play connectivity with the included USB 3.0 cable. Great as a Mac external hard drive or Windows drive, simply back up with a single click or schedule automatic daily, weekly, or monthly backups. Plus—edit, manage, and share photos with a one-year complimentary subscription to Mylio Create and a two-month membership to Adobe Creative Cloud Photography Plan!

Seow Yong Teck andy
1.0 out of 5 stars undetectable drive
18 December 2019
Verified Purchase
received a Brand new undetectable drive try it out on both laptop and desktop but still cant detect the drive very disappointed I had to go through the trouble to wrap the box and return the item....
Read more
Helpful
Comment Report abuse
See all 1 customer reviews
Write a customer review

Snap, Crackle and Pop
4.0 out of 5 stars(3.5 stars) Seagate Backup Plus Slim Hard Drive is best suited for backup or archive uses
4 April 2019 - Published on Amazon.com
Vine Customer Review of Free Product( What's this? )
The Seagate Backup Plus Slim Hard Drive provides a large amount of storage in a small package, with typical performance for backups.

But while it would be tempting to use a drive this small as something portable or for everyday use - the technology choices Seagate has made make these 2TB drives most suitable either for:

- backups (rather than as a scratch drive or auxiliary portable external drive for daily use); or as
- an archive drive, to store a permanent or off-site backup.

INTERNAL DRIVE: Crystal Disk Info reports the drive inside this case to be a Seagate ST2000LM007, a thin 7mm, 2.5" 5400 RPM drive originally introduced in 2016 in the Mobile HDD line of drives. It's useful to know the drive inside an external drive, as there is often much more information available on the internet about the specific drive model. That's certainly the case with this drive - a search turns up quite a bit of information.

SMR RECORDING METHOD IS BEST USED FOR BACKUP OR ARCHIVE: As with most of Seagate's consumer-oriented drives currently, this drive uses Shingled Magnetic Recording (SMR) to increase the data density of the disk. While this does create more storage, it can create write speed issues. It's most useful for applications such as backup that don't need frequent re-writes.

TWO PLATTERS IN A 7MM DRIVE MAY MEAN A MORE FRAGILE DRIVE: Seagate has squeezed two spinning disc platters into a very thin 7mm case, and has had to redesign the drive to accommodate that. The specifics of how that was done suggest it may not be a good choice for a drive you plan to carry and use daily.

If you plan to carry an external drive on a regular basis, I'd suggest using a more robust design than this one, even if that means a slightly larger design. For an external drive, there's not much size difference between a 9mm drive, which can more easily accomodate two platters, and a 7mm drive.

BENCHMARKS AND WRITE SPEEDS: I've done some writes to the drive, and haven't found anything surprising. The performance for your use will vary widely depending on the computer it is attached to - the speed of the computer's drives and USB connection.

POWERED VIA USB: The drive is powered from the USB port. There is no external power supply. This is overall a good thing - it makes it much easier to use the drive, and so more likely you'll back up your files often. But keep in mind that it won't work on a non-powered USB hub, or a low-powered standard USB port.

1.8TB of STORAGE: As is typical for hard drive marketing, the 2TB indicated size means this stores 2 trillion bytes, which your system will report as 1.81 TB.

Stephalopod
1.0 out of 5 starsDead after 35 days.
7 June 2019 - Published on Amazon.com
Verified Purchase
Using this drive as a backup for my Mac Pro, tonight it unmounted from my computer & will not mount again. Unit has power, makes normal amount of noise trying to boot up, but will not mount on 2 different Macs. Tried different ports, cables, etc.

And of course, this happens on the eve of a deadline in which I need to retrieve a file from this piece of garbage.

Had the foresight to buy a protection plan, so we'll see if my files can be retrieved once business hours resume. Sadly, this won't happen before my deadline so, thanks for nothing, Seagate. Never again.
Read more
163 people found this helpful.

M. Revzin
1.0 out of 5 starsUnreliable. Do not buy.
17 May 2019 - Published on Amazon.com
Verified Purchase
The worst drive ever. I bought brand new and filled it in XCOPY for backup purposes. When it got to 3.5TB it slowed down on writing from 20-40 MBs to 300 KBs, probably rebuilding itself. I will never buy portable Seagate again.
Read more
118 people found this helpful.

Zitty
1.0 out of 5 starsSlow...
4 June 2019 - Published on Amazon.com
Verified Purchase
I had an older Seagate Slim USB 3.0 drive that was very fast, about as fast as my fastest SSD pen drives. This one is 3x slower :-( My test was on running an image backup on my laptop. Using any fast USB/SSD drive, the backup runs in about 25 mins. With this drive it takes about 80 mins... Yikes!
Read more
115 people found this helpful.

Amazon Customer
5.0 out of 5 starsIf you want to make a backup you can read years down to the line, use Seagate...
28 June 2019 - Published on Amazon.com
Verified Purchase
I have ordered many for work 35-45 and have had no fail to date (seagate) 1-5 TB. Ordered >20 personally and only one fail... had back up so no issue plus recovered using Spinrite... (Ran Spin Rite and it fixed it, but I do not trust that drive any more.)

Have ordered another Company (5 of them over 6 years). and every one but one had a spindle motor issue and the other one had a read issue ( if your counting a 100% failure rate... others have said things about seagate like at my local Best Buy, but my experience has been almost every one of the Seagate’s have lasted over 3-7 years with no issues...
Read more
84 people found this helpful.
Go to Amazon.com to see all 1,036 reviews 4.3 out of 5 stars
Free & fast delivery, movies and more with Amazon Prime
Prime members enjoy free & fast delivery, exclusive access to movies, TV shows, games, and more.
> Get started
Back to top
Get to Know Us
Connect with Us
Make Money with Us
Let Us Help You
© 1996-2020, Amazon.com, Inc. or its affiliates