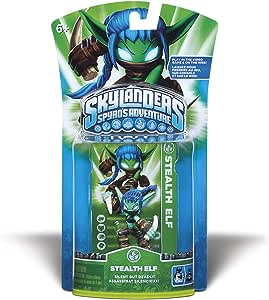 Add to Cart
S$95.99
+ FREE Delivery
Sold by: SG EXPORT
Have one to sell?
Sell on Amazon

by ACTIVISION
Platform : No Operating System
Only 4 left in stock.
International product from outside Singapore
Arrives: 21 - 22 July

Fastest delivery: 15 - 17 July Details
Ships from and sold by Amazon US.

"Silent but deadly!" says Stealth Elf. For generations, the Skylanders have used their magical powers and weapons to protect Skylands. But now, an evil tyrant has frozen them and banished them to Earth. Only you can put them on the Portal of Power and bring them to life to save Skylands forever. Collect and build the ultimate army of Skylanders! Each Skylander has their own unique powers and abilities to enhance your game play experience and save Skylands. Bring your Skylanders to life by placing them on the Portal of Power!

As a small child, Stealth Elf awoke one morning inside the hollow of an old tree with no memory of how she got there. She was taken in by an unusually stealthy, ninja-like forest creature in the deep forest. Under his tutelage, she has spent the majority of her life training in the art of stealth fighting. After completing her training, she became a Skylander and set out into the world to uncover the mystery behind her origins.

LegoDad
5.0 out of 5 starsGreat close in combat fighter
30 July 2013 - Published on Amazon.com
Verified Purchase
Normally I prefer the distance attackers, but my son really likes the ones that get right in there and fight. Which is one reason why he's swapping characters as we play and he never has to replace mine. ;)

This one is a great addition to a collection for anyone who likes the hand to hand fighters. Fast and furious, and the stealth option is pretty cool, almost always works.

If you have a kid (or you as a grownup) that likes the close combat as opposed to the ranged ones, this is a great figure.

Mom on the Job
5.0 out of 5 starsOne of the best games in the world!! :)
6 July 2012 - Published on Amazon.com
Verified Purchase
I love how you can play with one Skylander and then change whenever you want. Each one is uniquely different from the rest. Also, there is such a variety that you will never get bored playing or hunting for different ones. There is also special ones that are not in the main thirty-two. That is very cool how they did that. The only problem that I faced was that when the Skylanders were very popular, they could be very hard to find in the stores and the end result was buying them online. Most of the time, the newest ones were out of stock. Except for that, the game is extremely fun to play and very addicting.
Read more

Love A Lot Mom
5.0 out of 5 starsWhat can I say...
8 December 2012 - Published on Amazon.com
Verified Purchase
My daughter and my husband are battling KAOS all the time. I have no idea what they are talking about, but they are having fun and are playing until all their figures need rest and can't fight any longer. Cute designs and they even look great in a display casing we are using for them.
Read more

Krissy Whiski
5.0 out of 5 starsStealth Elf? More like NINJA!
3 January 2013 - Published on Amazon.com
Verified Purchase
My son plays this game, and I occasionally join in and play it with him. This is my favorite character. Love the close action melee fighting. Not much defense, but she's stealthy and does some kinda scarecrow thing, that makes up for that.
Read more

Steven Mitchell
5.0 out of 5 starsFive Stars
15 January 2017 - Published on Amazon.com
Verified Purchase
Great addition to our collection.
Read more
Go to Amazon.com to see all 79 reviews 3.7 out of 5 stars
Free & fast delivery, movies and more with Amazon Prime
Prime members enjoy free & fast delivery, exclusive access to movies, TV shows, games, and more.
> Get started
Back to top
Get to Know Us
Connect with Us
Make Money with Us
Let Us Help You
© 1996-2020, Amazon.com, Inc. or its affiliates