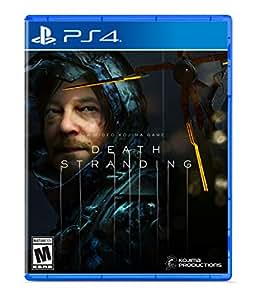 by Sony
Platform : PlayStation 4
4.6 out of 5 stars 1,412 ratings
Currently unavailable.
We don't know when or if this item will be back in stock.

Besieged by death's tide at every turn, Sam Bridges must brave a world utterly transformed by the Death Stranding. Carrying the stranded remnants of the future in his hands, Sam embarks on a journey to reunite the shattered world one step at a time. What is the mystery of the Death Stranding? What will Sam discover on the road ahead? A genre defining gameplay experience holds these answers and more. Starring Norman Reedus, Mads Mikkelsen, Léa Seydoux and Lindsay Wagner.

Paulie!
5.0 out of 5 starsit'a a 5/5. But not for everyone. sorry but it's true!
8 November 2019 - Published on Amazon.com
Edition: StandardVerified Purchase
Do you like Shadow of the Colossus? The Last Guardian? Did you get enthralled by Journey? Do you play Silent Hill games for the atmosphere and feeling evoked by the game?

If yes, I think you will be able to see the value in Kojima's latest offering. The game is wonder-filled, beautiful, and haunting. It's not MGS6, although there is more action here than has been described in many reviews or seen on YT.

For example, you've probably read the "first 10 hours are a slog and filled with backtracking." Well, I didn't have to backtrack til hour 6 and when I did, it was on a motorcycle and took like 2 minutes. Before that point, I was pulled into an amazing world and gameplay loop that alternated between top tier storytelling cinematics and tight, compelling gameplay. Each loop added a bit more to each. Within 3 hours, I had seen and done more crazy things than most games dream of, had heart pounding moments, strategized about my moves, ran for my life, explored in wonder, and got pulled into the mystery of terms, characters, and visuals Death Stranding offers.

Give the game a rental or if you have the disposable income, go with your gut. This isn't No Man's Sky launch part 2. This is a masterpiece in its own right and playing it will be immensely satisfying and emotionally engaging. History will look fondly on Death Stranding after the initial polarization stabilizes.

UPDATE:
So why this would not be a good game for you:
-It’s a timesink. It took me 30 hrs to clear episode 3 of 14. Granted the game is basically a sprint to the end after episode 8, but still.

-You’re not into story-heavy games told through Hollywood-esque cutsenes.

-You don’t like the core gameplay premise. While this is anything but a “hurr derr walking sim”, delivering stuff by journeying (via walking, hiking, vehicles, and other means) is a primary facet of the game.

-You’ve never liked Kojima games. While this one is fresh and something new, there is a classic Kojima feel to the game.

-You want a straightforward point A to point B experience. Death Stranding is mostly pure freedom. At any given time you could do one of a dozen or more things.

So why this would be a good game for you:

-Kind of the opposite of the above: you want a lot of content, you like story heavy games, the core premise of journeying looks interesting to you, you’re a fan of Kojima, and you want a truly free gameplay experience.

-You’re fascinated by the genre mashups of worldbuilding (a la Minecraft), third person stealth/shooter (a la MGS), horror (a la Silent Hills), adventuring/hiking, management and planning, and strong narrative in a fresh beautiful world….all overlaid with the social strand system where you give and get likes, help other players and are helped, and see what the community is doing in the game’s world.

Vincent
3.0 out of 5 starsWalking simulator with extra steps
8 November 2019 - Published on Amazon.com
Edition: Standard
May not be for everyone. This is not an action heavy game. It is extremely slow paced.

You play as a mail carrier in a post apocalyptic world escorting packages across mountains and large open fields in a series of fetch quests, giving you bits of story as you move forward.

Humans are separated by miles of mountain terrain and valleys because BT's an alien ghost like figures taking over America and are extremely dangerous. You take up the dangerous task to escort packages from one place to another trying to connect everyone together. You are equipped with a BB or baby in a glass pod to help detect the BTs.

Game has a lot of metaphor (mostly of isolation and desire to connect to others), mystery and lore behind it. A lot of world building as you piece together narratives to figure things out.

Gameplay is very boring if you're not one to enjoy the sites and like constant inventory management. As mentioned before you are just escorting packages to reveal story.

The amount you carry and how you setup your inventory backpack/belt/etc influences your character's balance, mobility, stamina depletion, and speed. Apart from initial package you must deliver, there are stray packages you can pick up for extra rewards at the end. You also have to decided if you want to carry traversal items like ropes and ladders. It will be tough to traverse in rugged terrain if you overload on items. If you are too greedy it can turn into the Dark Souls of walking simulators

If you aren't prepared, sometimes you have to go the long tedious long way.

If you go online, other players can leave ladders and other objects laying around to help your trip a bit easier. You are able to thumb them up/give likes for reputation points and vice vera if you leave items behind

You have to hold trigger buttons and balance with thumb sticks. walking/hiking around is manual and not automated.

If you fall down, items/boxes you're carrying may drop off you, and you have to go back and retrieve it. Very frustrating if you're climbing a steep slopes.

There's a stamina bar you have to keep track of. If you don't rest up your max stamina will deplete until you go to sleep in a bed or visit a hot spring

There are some backtracking involved. Once you deliver packages to one location, you may be asked to bring new packages back to original location hindering progress.

There are weather effects you have to keep in mind in certain areas/some packages cannot be wet, and for BT ghost-like enemies you have to sneak past or kill once you get weapons to do so. There are also human enemies (MULES) you have to fend off or sneak past as they try to steal your cargo

You are graded/rewarded by the amount of packages delivered and the conditions of them when they arrive. The better you do the greater chances of upgrading your stats.

At it's core Death Stranding it's a hiking simulator, escorting packages while unveiling secrets/mystery of the world.Once you get the hang of it/master it, it can feel very zen. Most of the time it feels like work, but there is payoff with story and immersion (if you're into that sort of thing)
Read more
252 people found this helpful.

Kojima "one trick pony" shows clearly why Konami dumped him because he's clearly out of ideas. I feel sorry for the principal cast because they at least tried to breathe life into this horrid soulless empty piece of garbage.

Already sold it off to a friend for what I paid for it, and uninstalled.

I would have had a better time if I invited in the Amazon delivery guy who dropped it off and asked him to talk to me about his day.
Read more
229 people found this helpful.

Jay CosTa
5.0 out of 5 starsHoly jesus baby!!!
9 November 2019 - Published on Amazon.com
Edition: StandardVerified Purchase
This game is amazing..visually and story wise, it moves you it bores you, it stresses you, it makes you cry.. .this is the most amazing thing ive seen lately..this is art..a Kojima game release is not just a release...its an event..get it .play it. embrace it.
Read more
113 people found this helpful.

Michael Westen
1.0 out of 5 starsEpically tedious and boring
8 November 2019 - Published on Amazon.com
Edition: Standard
Rented on redbox, about 45 minutes in and I'm bored. Too many cutscene's I get the game's trying to tell a story but it's more like watching a movie than letting you play a game. Like someone said you're character is a porter so you just go place to place delivering packages.
Read more
128 people found this helpful.
Go to Amazon.com to see all 479 reviews 4.3 out of 5 stars

Edition: Standard
Free & fast delivery, movies and more with Amazon Prime
Prime members enjoy free & fast delivery, exclusive access to movies, TV shows, games, and more.
> Get started
Back to top
Get to Know Us
Connect with Us
Make Money with Us
Let Us Help You
© 1996-2020, Amazon.com, Inc. or its affiliates