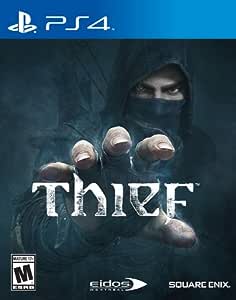 by Square Enix
Platform : PlayStation 4
Usually dispatched within 1 to 3 weeks.
Arrives: 6 - 15 Aug. Details
Ships from and sold by ErgodeBooks Ships from USA, from outside Singapore. For information about products sold by international sellers, click here.

Garrett, the Master Thief, steps out of the shadows into the City. In this treacherous place, where the Baron's Watch spreads a rising tide of fear and oppression, his skills are the only things he can trust. Even the most cautious citizens and their best-guarded possessions are not safe from his reach. As an uprising emerges, Garrett finds himself entangled in growing layers of conflict. Lead by Orion, the voice of the people, the tyrannized citizens will do everything they can to claim back the City from the Baron's grasp. The revolution is inevitable. If Garrett doesn't get involved, the streets will run red with blood and the City will tear itself apart.

This is a game called 'Thief' and you are supposed to steal valuable items, while not getting caught. Self explanatory right?

Well, despite that being pretty obvious, every singe "professional" critic, YouTuber and Twitch streamer that I have watched plays this game like some sort of medieval Call of Duty game, knocking out guards and killing everything that moves before picking up the loot. Then they proceed to complain about the terrible level design. Terrible level design? You eliminated 75% of the level design!

Every single level and scenario in this game is a giant puzzle. The reward for cracking the puzzle is sitting in a vault at the opposite end of this mansion, asylum, morgue etc. The guards, their patrol routes, the torches that they carry lighting the environment are all huge parts of this puzzle and almost the entirety of the level design.

You are not supposed to to knock the guards out. You are supposed to navigate the shadows, pickpocket the guards, sneak by and steal the loot sitting in that vault from under their noses. Yes, from under their noses, not over their dead bodies. You are a master thief, not a murderer. Killing or knocking the guards out is like a taking a Rubik's Cube and instead of twisting it to solve the puzzle, you take out the individual pieces and replace them in the correct spots.

Let me give you an example.

One of the first chances you get to play with the guards and steal loot from a chest in an area they are patrolling happens in the prologue. You will reach a small courtyard with two guards and a chest with loot. One guard is standing at one end of this courtyard and another is holding a torch and walking from one side of the other.

Scenario #1 - You can take out your bow, put two arrows in their heads and then loot the chest. Boring level design right?

Scenario #2 - Or you can observe the guards and try to figure out a way to get the loot without killing them. Now you will notice that it takes the guard about 8 seconds to walk from one side of the courtyard to the other. If you are quick and flawless, it will take you about 6-7 seconds to pick a lock and another 3 seconds to loot the contents and close the chest. So you know you can't pick the lock and loot the chest at the same time. There is more shadow on the right side of the area so that will be your best approach route. You enter the courtyard, sneak to the middle of it avoiding the standing guard, wait for the second guard to turn around from the chest and start his patrol. You sneak to the chest, start picking the lock while counting the seconds before the guard comes back, your adrenaline levels rising as you know you can't make a mistake. As soon as you pick the lock, you dart for the shadows as the guard approaches the chest and inspects it. Nothing wrong, right? You wait again for him to start his patrol and you go back to loot the chest. You then proceed to make matters worse (for the guards) as you stick around and pick their pockets too.

Now, scenario #1 takes about a minute and is pretty boring and no different than looting a chest in an MMO. Scenario #2 takes about 10 minutes and is nothing like any other game really offers.

Once you start going further in the game, these levels get more complex. More guards, more light sources, glass on the floor, noisy animals in cages, lamps with light switches, sleeping guards, patrols on balconies etc. If you try to steal the loot without knocking out or killing anyone you will soon realize how amazing the level design really is. Every guard is there for a reason, inspecting an important area or guarding an entrance. Every light source creates shadows in different places. Sometimes, a broken light will flicker on and off, which you have to take into consideration as well. All of this level design leads to the fact that after you sneak by a whole mansion undetected, pick locks, and finally after two hours get to the vault, you feel a tremendous sense of accomplishment and really feel like a master thief. If you kill everyone with your bow and loot the vault....well you will feel like you just played a level of medieval first person shooter.

On top of all of this, every important piece of loot has a story attached to it. Once you get back to your hideout and inspect the pieces you stole, there is note regarding what they are, who made them and who they belonged to. The lore is there if you take the time to actually find it and read it.

So yes, the game is obviously not for everyone. But you can say that about any other game out thre. Different people like different things. So if this is the type of game and the type of challenge you enjoy, then this is a fantastic game and worth every penny.
Read more
614 people found this helpful.

Guitar Johnny
5.0 out of 5 starsLove this game!
26 November 2015 - Published on Amazon.com
Platform For Display: PlayStation 4Verified Purchase
I have played every release of the Thief series. I'm not a hardcore twitch gamer, but I've played a pretty good number of games and Thief is somehow my favorite. It just suits me really well. Something about the combination of medieval fantasy and technology, but really it's the sneaking and figuring out ways to solve problems. Try to play it through without killing anyone, only knockouts. Not easy!

Definitely the best release in the Thief series of games. I think I paid $15 and easily got 10x the enjoyment of games that have costed me 4x as much.
Read more
7 people found this helpful.

Qbkohl
4.0 out of 5 starsUnique Experience
3 April 2014 - Published on Amazon.com
Platform For Display: PlayStation 4Verified Purchase
One thing seems to be the consistent theme with Thief - people seem to either really like it or are unenthused. I'm one that happens to be impressed. So much criticism of this game is out there that I nearly bypassed it. But I'm truly glad I didn't.

First, let me say that this is my first stealth game experience - I have never played any of the previous Thief games, nor delved into any stealth type game before this. Therefore, I personally find this game very new, unique and exciting. That may not be true for you if you are familiar with previous stealth games or predecessors of the Thief series.

It's challenging for me to figure out how to move about certain areas w/out arousing the guards attention, or getting to where I need to go without needing to clock one of them in the back of the head. However, when you do that - your "play-style" points at the end of each chapter will suffer, depending on how often you take a guard down. After all - the name of the game here is stealth. Patience and awareness of your environment are your two greatest weapons. You'll need to stay sharp to get past a great many later chapters out there.

One nice feature is that at the end of each chapter - you are shown how your play style is rated & you are given the chance to replay that chapter to improve your performance, should you desire to do so. Else, you can continue on.

Swiping loot is great fun, and also challenging. Trying to avoid alarming dogs, birds, etc who are caged near by as they will alert guards.

Personally, since it's set so long ago, I like the look of the game - to me, they give it an "Old World" charm, however, I have seen better graphics. It's almost always nighttime, which is when a thief can best move about in the shadows. However, there is plenty of lighted areas to give you away if you're not careful.

Yes, the acting can be repetitive - especially from guards and civilians if you linger in a spot for awhile waiting to time guards as they walk their posts, etc, and Garretts' spoken thoughts (and interactions with others) are rather devoid of emotion. Then there is the audio when someone is nearby - it is way too loud & of not much use. You cannot distinguish where someone is in proximity to you as their voices all sound like they're standing right next to you - thus I took off a star for that.

Other than that - I truly am enjoying this game. You must stay sharp to avoid traps, find loot, stay away from prying eyes, etc. So, it keeps you on your toes, or at least it's keeping me on my toes and that's what I like so much about this game.

If you're on the fence about it - why not watch a couple youtube gameplays before purchasing. I don't normally recommend people do that, but since this game gets such a wide array of different reviews and there are several ways of going about accomplishing objectives - you need not follow the gameplay of someone else. For after all - it doesn't matter what anyone else thinks about the game - but you, or how you go about playing it, for that matter.

Some have compared this game to an "Open World" game, and although there are different routes and directions you can take to arrive at your next destination or achieve your next objective - it is by no means an Open World game.

In the end - as with any game - there will be those who will enjoy it and others who don't.
Read more
3 people found this helpful.
Go to Amazon.com to see all 411 reviews 3.8 out of 5 stars
Free & fast delivery, movies and more with Amazon Prime
Prime members enjoy free & fast delivery, exclusive access to movies, TV shows, games, and more.
> Get started
Back to top
Get to Know Us
Connect with Us
Make Money with Us
Let Us Help You
© 1996-2020, Amazon.com, Inc. or its affiliates