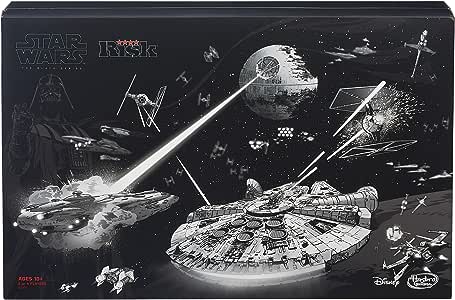 The final moments of Star Wars: Return of the Jedi can come to life for you and your friends in this awesome Star Wars version of the classic Risk game! Your mission? If you play as the Empire, it’s to destroy the Rebel fleet. But if you play as the Rebel Alliance, it’s to destroy the Death Star! But the battle between Luke Skywalker and Darth Vader could tilt the game one way or the other. Plan your assault, give your battle orders, and earn bonus orders by clearing sectors or by destroying either Luke Skywalker or Darth Vader. Send your fighters in to destroy or defend the Death Star, or to attack or defend the Rebel fleet! Who will be victorious in the end? Play Risk the Star Wars way and find out! Star Wars products are produced by Hasbro under license from Lucasfilm Ltd. Hasbro and all related terms are trademarks of Hasbro.

Hasbro is committed to being an ethical and responsible company and is a recognized toy industry leader in the areas of product safety, environmental sustainability, ethical sourcing and philanthropy.

In this Risk: Star Wars Black Series Edition game, players can lead a fleet, take a risk, and rule the galaxy! In this strategic game for 2 or 4 players, opponents must test their skills by commanding Stormtroopers and other Star Wars characters in a strategic and skilled fight. Players can re-create the final moments of Star Wars: Return of the Jedi as they prepare a plan, arm for battle, and advance their troops in this cataclysmic fight for the future of the galaxy! Play as the Empire and destroy the Rebel fleet, or play as the Rebel Alliance and destroy the Death Star. Which side will win?

There are 3 battles going on simultaneously: the attack on the Death Star, the shield assault, and the battle between Luke Skywalker and Darth Vader. The Rebel player's mission is to destroy the Death Star, but first they must destroy the shield generator protecting it on Endor. The Rebel player should be careful that the Emperor and Darth Vader don't defeat Luke, though, as that will tilt the game to the dark side.

The Empire player's mission is to defeat all Rebel ships before they destroy the Death Star. The Empire player must stop the Rebels from destroying the shield generator and make sure that Luke doesn't win his duel with Darth Vader or worse, redeem him and strengthen the Rebels' assault.

Star Wars products are produced by Hasbro under license from Lucasfilm Ltd.

Hasbro and all related terms are trademarks of Hasbro.

Defend or Destroy the Death Star

Choose to Play a 2 or 4-Player Game

Bring even more excitement to this game by playing in teams! In team gameplay, players must strategize and work together to defeat the enemy. No matter which way they choose to play, Risk game fans can put their battle plans to the test amid the action and adventure of the Star Wars universe.

David A Mcree
5.0 out of 5 stars For those of us that missed Queen's Gambit, grab up this Star Wars Risk
17 December 2015 - Published on Amazon.com
Verified Purchase
I have had the fortune to be in the Board Gaming community for some time and many times, we tend to shy away from the mass market games. Not because they aren't that good, but because there are better ones out there. I first played Star Wars: Risk at a friends and there were problems with how it played. We found out that the rules included in the game were lacking in some of the mechanics that left it up to the players to figure out. And unfortunately, our first attempt meant we figured it out incorrectly.

But thanks to the community over at Boardgamegeek, rules have been clarified and I got another chance to play this game again at BGG Con in November 2015. These slight changes and explanations made this a must buy for me. I have played the standard and the Black Box version and other than the pieces to the game, there is no difference in rules or mechanics. But the pieces add another level of enjoyment. Don't skimp out and not get the Black Box, the models for the Falcon, Death Star, Executor, and Storm Troopers make it worth it.

One final thought, the inserts are awesome for when the game is put away. So glad I bought this.

Selyts
5.0 out of 5 stars I absolutely love this game (and I'm a Trekker).
14 June 2017 - Published on Amazon.com
Verified Purchase
This is NOT Risk and that's absolutely a great thing!
I had purchased this a while back and decided to finally break it out.
Excellent presentation, good components, simple yet efficient storage, and fantastically thematic!
This was so great, that I had to watch Return of the Jedi right afterwards (no joke).
The fact that while you are battling with starship fleets in the middle, you have the battle on Endor on one side while Luke and Vader duke it out in front of the Emperor on the other, is very well implemented.
The card system and simplified dice combat makes this game easy yet offers varied replay value thanks to possible alternate strategies.
My son and I were playing in seven minutes. I can not say that about any other Risk game (then again, this is not Risk...thankfully).
If you like Star Wars, simplified fleet battles, or just fun thematic boardgames, them this game is for you!

-Clint-
3.0 out of 5 stars Fun game, my miniatures came bent though.
2 January 2016 - Published on Amazon.com
Verified Purchase
Games are quick and fun, not as drawn out as traditional Risk. My Millennium Falcon and Executioner miniatures were bent pretty badly though (banana shaped star destroyers aren't too intimidating). I soaked them in really hot water and bent them back, but after awhile they start to curve up again. :/ One of the reasons to get the black edition is for the better quality game pieces and the miniatures, kinda stinks to have them bent.

Who ever plays as the empire will have to work a bit harder to pull off a win, but it is possible.

-1 extra star for the bent game pieces, would be a 4, 4.5 otherwise.
Read more
9 people found this helpful

Scott Holm
5.0 out of 5 stars This game is nothing like Risk, and that's great!
7 September 2016 - Published on Amazon.com
Verified Purchase
For those that are afraid that this will be your same old boring game of Risk only with people turtle-ing on Mon Calamari, let me put your fears to rest.

This game is designed specifically for two players (One player is the Imperials, while the other is the Rebellion.) It features three battles happening simultaneously.

Second, the battle of Endor rages on as rebel troops attempt to make their ground forces to the shield generator to shut it down.

Finally, a space battle with the fleets of the Rebellion (led by the Millenium Falcon) square off against the numerous swarms of Imperial TIE fighters led by the Executor. If the ground team is successful in lowering the shield, the rebels can attempt to destroy the Death Star.

The game comes in a standard and deluxe edition. The deluxe edition has miniatures for the Death Star, Millenium Falcon, and Executor, as well as having much nicer cards to play with. The box is also designed better.

In the end, calling this game Risk is a disservice to how great this game actually is. All similarities to Risk are tangential at best.
Read more
3 people found this helpful

Eric Folsom
5.0 out of 5 stars Battle of Endor in a box. This is not Risk, thankfully
30 December 2015 - Published on Amazon.com
Verified Purchase
Don't let the name fool you, this is not a Risk knockoff and thank goodness for that. Seriously, they put the name Risk to sell more.
With that out of the way, what a great quick game! The Rebels and Imperials play very differently.
Using cards for actions, each player must plan 3 moves ahead trying to figure out what the other will do.
As the Rebels do you focus on taking down the shield generator, taking out Tie fighters and the Super Star Destroyer, or do you kill Darth Vader for a bonus? Maybe he can even be redeemed for a huge bonus.
As the Imperials do you try to wipe out the Rebel fleet with your fighters, take out their reinforcements with the power of a fully armed and operational battle station, place stormtroopers to slow down the Rebels on Endor, or do you serve the Emperor and kill Luke Skywalker?
Game plays quickly and every turn makes you say "you Rebel scum!"
First game Rebels surrounded by Tie fighters, 2 Y-Wings broke through and fired at the Death Star, somehow blowing it up.
Second game Imperials blew up whole sections of Rebels using the Death Star and ended the game with the last B-Wing exploding.
Third game, the last of the Rebel fleet, 3 X-Wings made a run for it and destroyed the Death Star.
Every game someone has said "Let's play again!"
Read more
4 people found this helpful
Go to Amazon.com to see all 146 reviews 4.4 out of 5 stars
Free & fast delivery, movies and more with Amazon Prime
Prime members enjoy free & fast delivery, exclusive access to movies, TV shows, games, and more.
> Get started
Back to top
Get to Know Us
Connect with Us
Make Money with Us
Let Us Help You
© 1996-2020, Amazon.com, Inc. or its affiliates