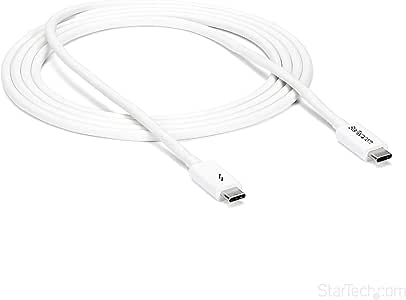 This white Thunderbolt 3 (20Gbps) cable lets you connect to any Thunderbolt 3 port (USB Type C) to deliver video and data to your Thunderbolt, USB and DisplayPort devices. Plus, the cable can provide power for charging your devices, and you can link up to six TB3 devices as part of a daisy-chained connection. Transfer a 4K movie in less than a minute with this Thunderbolt 3 USB C cable (male to male), supporting data transfer rates of 20Gbps when connected to a Thunderbolt 3 device. You can transfer photo and video files at twice the speed of a USB 3.1 (10Gbps) cable. The TB3 cable cord supports full 4K 60Hz video and DisplayPort 1.2, and is compatible with existing DisplayPort displays. It's perfect for connecting your docking station or laptop to a monitor with astonishing resolution, contrast, and color depth for amazing detail. The Thunderbolt 3 Type C cable delivers up to 100W of power for charging a Thunderbolt 3 laptop or powering a display, and 15W for bus-powered devices such as a hard drive enclosure. The TB3 cable gives you an easy way to bridge multiple Thunderbolt 3 USB C enabled laptops for peer-to-peer 10GbE networking. It’s perfect for setting up small workgroups and sharing peripherals such as printers and storage. You can also connect two Thunderbolt 3 laptops together, for easy PC migrations. This Thunderbolt 3 cable is Thunderbolt Certified for d reliability and is backed by a StarTech.com 2-year .

Edward B
5.0 out of 5 starsWorks for eGPUs
4 April 2020 - Published on Amazon.com
Capacity: 6 ft / 2mStyle: 40Gbps | BlackVerified Purchase
I am using this to connect a Razer Chroma eGPU containing an RTX 2080 Super GPU to my HP ZBook 15 Studio G3. I can't speak to the charging capabilities of this cable since my laptop does not support charging over Thunderbolt, but the speeds are identical to the speeds I was getting out of the 0.5m included cable with the Razer Chroma eGPU. I had used that cable for about 2 months before deciding I wanted to move my GPU further from my laptop. After using this cable for a month, I can say I see no performance difference (good or bad) compared to the included cable when playing games or during normal use. The connectors feel a little bit on the flimsier side, which isn't ideal since I connect and disconnect this cable once a day. That said, so far I can't notice any fatigue so only time will tell (I will update this review if / when the cable does fail - until then, you can assume this cable lasts with daily plugging and unplugging from March 2020 to present day).
Read more
7 people found this helpful.

allquixotic
3.0 out of 5 starsWorks, but a weird physical connection problem with one of my TB3 devices
23 July 2017 - Published on Amazon.com
Capacity: 6 ft / 2mStyle: 40Gbps | BlackVerified Purchase
As far as reliably delivering a Thunderbolt signal over a longer-than-typical distance for Thunderbolt via a sturdy cable, this is perfectly fine. What makes me a little bit uneasy is that the "mating" of the cable to one of my Thunderbolt 3 devices was extremely weak -- like it didn't "grab on" all the way. I was able to get it to loosely connect and stay in, but if the cable is substantially perturbed or even slightly tugged on, it'll come out.

The device I had a problem with is the Apple External Graphics Developer Kit's Sonnet branded external GPU case. I'm not sure if the fault lies with Sonnet or StarTech, but you'd think simple physical issues like correct connectivity would have been resolved with new-generation standards like Thunderbolt 3.
Read more
8 people found this helpful.

BatteryKing
4.0 out of 5 starsWorks good. A little loose.
31 August 2019 - Published on Amazon.com
Capacity: 6 ft / 2mStyle: 40Gbps | BlackVerified Purchase
If you want a 40 Gb/s 6ft cable, pickings are slim and this is one. It is handling 40 Gb/s fine for my Dell XPS 15 7590 and dual DP docking station hooked to two 4k displays. It is a slight bit lose in the connector for the Dell XPS 15. For the Lenovo T580 and T590 machines I have tried it on, it is really lose and connectivity becomes a bit of a problem. Then again Lenovo has really dropped the ball in multiple ways when it comes to TB3. A couple examples are the T590 only has 2 of the 4 lanes hooked up, the T580 only seems to have 2 lanes hooked up in their multi-port and USB 3 for the other USB-C style port (generally used for charging), so can't do dual 4k displays through one cable. Also the multi-port on the T580 and T590 is super lose. Even when I get the cable positioned so the video isn't cutting out, I am having a lot of problems with the keyboard and mouse freezing up for a couple of seconds at a time once every few seconds, so have to connect the keyboard and mouse directory to the Lenvovo laptops in order to have a usable experience. Plus the Lenovo's won't boot with the docking station plugging in, so have to plug it in after the laptop boots. The Dell XPS 15 7590 on the other hand is smooth sailing on all fronts listed here, so it is not an issue with the cable so much I think as Lenovo dropped the ball on their laptops.

While my docking station is rated for 85W over TB3, my Dell XPS 15 7590 reports 65W max delivery, which is less than the 130W is is rated to carry over its dedicated charge port. Then again for most laptops most of the time 65W is fine. I have managed to get it to draw some from the battery while maxing out the TB3 link, but the laptop was also maxing out its temperature, which is not a good way to treat a laptop if you want it to last a while. I do have liquid cooled desk side computers, so my plan is to keep heavy lifting to those boxes anyways, so 65W is fine.

The end verdict is with the right laptop, this cable is plenty good for the job. I mainly knock off a star because it is a little on the loose fitting side to the point of causing problems where other USB-C style connectors work well enough. It seems to only be the case of where the connector on the computer / device is already a bit on the lose side with other connectors does this one push it over the edge to be problematic. In places where it is normally a tight fit, the extra looseness in stationary use seems to not be an issue.

My goal with this cable is to hook up a laptop that is off to the side to a docking station that is too far away for a passive TB3 to reach.
Read more
2 people found this helpful.

I want 4K @60Hz _and_ USB 3.1 so that I can use the 4 USB ports on the display at full USB3 speed. Going through many discussion forums, I found that the DisplayPort capability needs to be 1.4 (HBR3), which my Mini has, and the link cable also needs to be capable of 1.4 (HBR3) and support DP-Alt mode.

A reddit forum specifically mentioned this cable--Startech TBLT3MM, which is a TB3 20Gb cable that supports DP-Alt mode--but apparently it's not capable of HBR3.

I tried the same with an Intel NUC machine I also have (running Windows 10 Pro): Same exact results--I can't ever get the Startech cable to work at 60Hz no matter what setting I choose on the display.

This is unacceptable. The workaround I use are TB3-->DP cable and USB-A to USB-C cable to connect to he display.

The apparent build quality seems fine, and the cable is not as stiff as the Dell USB cable. But it will NOT do 60Hz ever. So no other choice but to return for a refund.
Read more
Go to Amazon.com to see all 90 reviews 3.9 out of 5 stars
Free & fast delivery, movies and more with Amazon Prime
Prime members enjoy free & fast delivery, exclusive access to movies, TV shows, games, and more.
> Get started
Back to top
Get to Know Us
Connect with Us
Make Money with Us
Let Us Help You
© 1996-2020, Amazon.com, Inc. or its affiliates