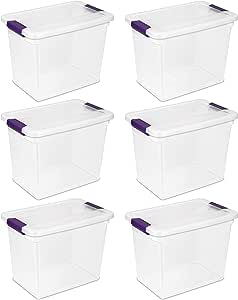 by STERILITE
4.7 out of 5 stars 921 ratings
Secure transaction
Returns Policy
Your transaction is secure
We work hard to protect your security and privacy. Our payment security system encrypts your information during transmission. We don’t share your credit card details with third-party sellers and we don’t sell your information to others. Find out more
New (2) from S$78.14

- Clear lids and bases let you view contents from any angle.

IHeartOnlineShopping
1.0 out of 5 stars These bins used to be fantastic, now they are a waste of money
19 November 2018 - Published on Amazon.com
Size Name: 6-PackStyle Name: 27 QuartVerified Purchase
Update 1/29/2019-I am leaving my original review in tact so you can follow the full story of what happened. I did finally file a Better Business Bureau report against Sterilite and received a refund for the batch of bins that had the residue. Unfortunately all of the bins at the store have the same residue, so this is definitely a company wide change.

Update 12/28/2018-We wrote to Sterilite about the film inside of their bins causing an allergic reaction and leaving the bins permanently foggy. After waiting more than a month for a response with excuse after excuse, they stated that they are not set up to provide refunds or replacements.

They gave a description of the film inside of their bins and declared it "not harmful". Not harmful to the average person, extremely harmful to someone with allergies. And by the way, they don't declare this "film" anywhere on their packages and we only found out about it because we complained, and we still do not know what the ingredients are in the film.

Exact quote from the e-mail from Sterilite: "The "greasy-like film” on the storage item is a vegetable based agent used in our process to assist in keeping the containers from sticking to one another making it difficult to separate them when they are nested. This is not a harmful ingredient."

So not only is the film here to stay and means we can no longer purchase their products, but it also means that Sterilite does not stand by or care about their product experience or their customers. I will never purchase Sterilite products again and our household has hundreds of dollars worth of their products now.

I've purchased Sterilite bins for years. Our closet is filled with them, and every room in our house has a few of these plastic bins. I have purchased this set of plum latch boxes 6 times on Amazon since May 2016, plus others in big box stores. The quality has diminished and I no longer recommend these bins.

My closet is evidence of the diminishing quality of Sterilite bins. There are 63 bins in my walk in closet holding everything including paper files, scrapbooks, clothing, and books. They stack extremely well and hold a lot of weight, the lightest weighing 3 pounds and the heaviest weighing 41 pounds.

When we moved, we just loaded the bins straight into the U-Haul, we didn't box anything up. As long as we put the heavy bins on the bottom, they survived the bumpy ride just fine. We loaded them into the new closet and the bins, their lids, and their handles were all in tact.

The high quality bins that represent the old Sterilite bins were purchased between May 2006-February 2018. The bins ordered after February 2018 started to have problems.

The first bad batch of bins, purchased in March 2018 had handles that would break constantly. The handles wouldn't just click out of place like on the old bins, but instead the little tab would break off completely, rendering the handle useless. This happened with bins that were lightweight holding baseball caps and heavy bins holding files.

The second bad batch of bins arrived in May 2018, and this batch started having broken bins inside of the shipping box. Three were cracked in one batch and two in a second batch. The bins no longer were packed with the lids on top of the stack, and the lids often arrived cracked and damaged.

In October 2018 I needed 6 bins for a project so I took the chance ordering them on Amazon again. To my amazement they all arrived in tact. They had a cloudy, foggy looking residue on the inside and outside of the bins and the bins did not look clear but instead looked foggy.

I thought that this could be a change to the manufacturing process, after checking bins at a local big box store and they had the same residue. I didn't think it was any big deal since I washed the bins. I thought that it certainly couldn't be anything harmful and had to be a factory residue of some sort.

We often store clean laundry in these bins, so my significant other took an article of clothing out of one of the bins and put it on, she immediately broke out in hives. We have no idea what the residue is inside of these bins. Unfortunately trips to two different big box stores made us realize all the bins now have this residue.

I have contacted Sterilite since I feel like this is a manufacturing problem, and I am still awaiting their response. I don't think Amazon should have to foot the bill of the return since the bins sold in stores have the exact same residue. This is clearly Sterilite's issue not Amazon's issue. When I hear from Sterilite, I will update this review.

I can no longer recommend these bins. The quality is not what it used to be, the handles break to easily, and now the mystery residue makes the bins look cloudy or foggy instead of clear. Whatever changes Sterilite has made to their manufacturing process were not for the improvement of the product. They are now unusable.
Read more
67 people found this helpful

M. Gore
1.0 out of 5 stars Their old products were very sturdy & durable
10 January 2018 - Published on Amazon.com
Size Name: 6-PackStyle Name: 27 QuartVerified Purchase
I've used Sterilite products for years and something has changed in their new products. The handles fall off randomly and the plastic/vinyl cracks with the slightest bump. Their old products were very sturdy & durable. These are not.
Read more
30 people found this helpful

MTBMech
4.0 out of 5 stars Four Groups of Six - 1/24 Damaged
15 November 2020 - Published on Amazon.com
Size Name: 6-PackStyle Name: 27 QuartVerified Purchase
I bought 24 of these tubs. They come in groups of six. The box of six tops and the separate box of six tubs are boxed together in an Amazon shipping box. The product boxes are 'padded' with paper. All four Amazon boxes arrived undamaged. The internal boxes were undamaged. In one of the four sets, the fifth tub, i.e. not an outside one in the stack, was badly cracked on four sides. See image. This appears to be a QC issue in packing. Since I had already loaded 22 of these tubs with my supplies, I only had two remaining, the damaged one and the sixth in the stack which is undamaged. Apparently, to get a replacement, I have to ship all six back after Amazon replaces when I only need one tub. Sure, I could take a good one from the replacement shipping, insert the damaged one and return. What a waste. Inspect before you load these up.
Read more

4.0 out of 5 stars Four Groups of Six - 1/24 Damaged
Reviewed in the United States on 15 November 2020
I bought 24 of these tubs. They come in groups of six. The box of six tops and the separate box of six tubs are boxed together in an Amazon shipping box. The product boxes are 'padded' with paper. All four Amazon boxes arrived undamaged. The internal boxes were undamaged. In one of the four sets, the fifth tub, i.e. not an outside one in the stack, was badly cracked on four sides. See image. This appears to be a QC issue in packing. Since I had already loaded 22 of these tubs with my supplies, I only had two remaining, the damaged one and the sixth in the stack which is undamaged. Apparently, to get a replacement, I have to ship all six back after Amazon replaces when I only need one tub. Sure, I could take a good one from the replacement shipping, insert the damaged one and return. What a waste. Inspect before you load these up.
Images in this review

jimmy
5.0 out of 5 stars Very handy size
25 November 2017 - Published on Amazon.com
Size Name: 6-PackStyle Name: 27 QuartVerified Purchase
These 27 quart bins are a very handy size. They hold enough books to reach the limit of liftable heaviness for old folks like me. They hold a fairly substantial quantity of off-season garments. They're good for odds and ends. The clamps are effective at securing the lid.

Good as they are, they have a downside. Sooner or later the otherwise transparent plastic exudes an oily, whitish film that coats the inside and outside of the bin. That is when the manufacturer's descriptive name for this product, "ClearView," becomes questionable. The film rubs off on the contents, but can, in turn, be brushed off of them. The surfaces of the bin can be cleaned to remove the film and although this is successful at least till the film forms again, it's a bit of a hassle (to clean them I use a paper towel or, better yet, a microfiber cloth moistened with isopropyl alcohol). Maybe all bins do this, I don't know.

One other nit to pick. Amazon shipped the original corrugated cardboard box of six bins inside another corrugated cardboard box, which was the right way to go. Inside both perfect boxes were five bins that were good and one (the bottom one) that was shattered. Amazon would have taken the bad bin back, but only if I returned all six. As I needed them rather urgently, I did not return them, but took a loss on the broken one. That was my choice. The incident at any rate serves as a reminder that, while the bins are sturdy enough, they are not indestructible, and reasonable caution is needed while handling them..

Emmie
2.0 out of 5 stars Plastic is weak
4 June 2018 - Published on Amazon.com
Size Name: 6-PackStyle Name: 27 QuartVerified Purchase
I like the size of these and ordered more basically out of convenience, it was too difficult to wade through the wide variety of shapes and sizes of plastic tubs on Amazon. However, the plastic is soft and not very durable. The purple handles have fallen off a few of them, and on at least one I couldn't get it back in because the 4mm pin that held it in place and broken off. I also managed to TEAR the lid on one of them when I had just recently bought them and was trying to open the box in a closet in the dark. The handles were locked in place and I had forgotten about them, but it's still pretty surprising that the plastic was weak enough for me to just tear with my bare hands.
Read more
9 people found this helpful
Go to Amazon.com to see all 257 reviews 4.0 out of 5 stars
Back to top
Get to Know Us
Connect with Us
Make Money with Us
Let Us Help You
© 1996-2021, Amazon.com, Inc. or its affiliates