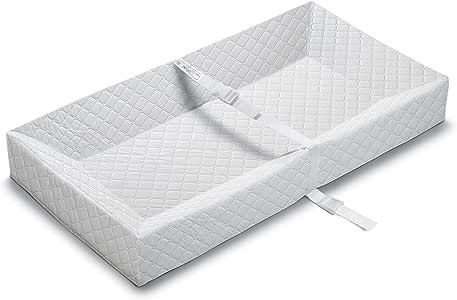 by Summer Infant
1.0 out of 5 stars 1 rating
Available from these sellers.

The 4 sided changing pad is designed to offer baby ultimate comfort and their parent easy cleaning and comfort of mind. This pad measures 32" x 16" x 4" and fits almost any change table or dresser. Its four high walls help prevent baby from rolling too far in any direction. This safety belt attaches over baby's mid section and a security strap keeps the pad attached to the furniture. The top vinyl is PEVA and phthalate and PVC free, and double layered for maximum durability.

The 4-Sided Contoured Changing Pad was designed to provide the ultimate security for baby while containing runny liquids. With four contoured walls and patented quick release safety belt, this changing pad ensures your baby is secure. A security strap underneath the pad keeps it attached to furniture and the non-skid bottom ensures it won’t slip or move. The soft, foam pad is comfortable for baby, and durable quilted double layer vinyl is easy for parents to clean. The 100% waterproof material can be easily wiped clean with a damp cloth, so you can be sure your infant’s changing area is germ free.

Christina
5.0 out of 5 stars Buy It!
16 October 2016 - Published on Amazon.com
Colour: 4-Sided PadVerified Purchase
Super nice. I bought a very expensive one and returned it because it wasn't nearly as nice as this one! The best changing pad covers I found are the MamaBare
Bamboo Changing Pad Liners For Baby, Anti-Slip, Hypoallergenic, Machine Washable, 36"x 20", 3-Pack sold here on amazon. They fit this changing pad perfectly. Just trying to save you the time I lost researching all this stuff :)

12/13/18
Two years, two babies, and countless diaper changes later.....the changing pad is holding up like a champ! Looks and feels the same as when I first purchased it. Great product

Diana
4.0 out of 5 stars Perfect, but for clean babies
6 January 2016 - Published on Amazon.com
Colour: 4-Sided PadVerified Purchase
This changing pad is perfect for our needs and has served us well for over a year and a half now. It's very well cushioned, and the strap that attaches to the changing table is great for keeping it in place. We didn't use it at first, but at one point our daughter figured out how to push herself off the wall with her feet and slide the whole changing pad away from the wall, so we had to quickly attach the strap to the dresser that we use as a changing table. She lost interest after she was no longer able to push herself around. But that strap that's drilled into the dresser was literally a lifesaver! I also love the 4 walls. Our baby also liked pushing up with her feet and scooting around the pad, so keeping her contained on all four sides was also crucial.

As far as cleanability goes... Well, I really wish they hadn't punctured the entire surface of the pad with all these little holes!!! They're not even stitch holes - there are no stitches forming the quilt-like pattern - no, it's just holes into the waterproof surface! Dumbest thing ever - why would you create a waterproof surface, and then drill a million holes into it?!?!? So, practically, it is not waterproof. You can see the foam underneath through the holes. Once liquid gets in there, there's no way to clean it out. You can wash the surface, but the foam in the holes remains stained. Luckily, our baby has never pooped on the pad, and only peed on it maybe twice in 20 months, and even then it was mostly contained in the open diaper under her butt or on the bath towel, so it hasn't been a problem. That's why we've been using it without a liner (the surface is very soft and pleasant, not plasticky). If your baby isn't prone to accidents in the short amount of time the diaper is open, then this pad is great all around and can be used as is (ours lasted over a year and a half of daily use before it started developing tears). But if your baby does have frequent accidents, then you'd need to use a separate waterproof liner on top of the pad, or just get another changing pad altogether.

UPDATE: I feel like I need to add this, even though I don't want to sound like I'm lecturing people. Some changing pads have a strap to buckle the baby down, some don't. Some people put the pad on a high surface, some put it on the bed or floor. But with the popularity of "changing tables" and other such high furniture, it's likely that a lot of people are placing these things high up, and, let's face it, probably not buckling their babies in. I myself didn't do it every time. I thought it wasn't necessary if I was right there. Until one day I stepped 3 feet to the side for two seconds, and my 7-month-old baby flipped himself out of the changing pad and fell head first towards the hard tile floor... I lunged and caught him, just as his head grazed the ground, and in doing so I smashed my own face into the corner of the wall. I'd much rather have a broken face than a broken/dead baby, but if I'd used the buckle that the pad came with, I wouldn't have had to have either. I will never think the buckle unnecessary or silly again. People, buckle your babies, even if you're right there! All it takes is a second, and it could be a second too long!
Read more
511 people found this helpful

Christopher B.
4.0 out of 5 stars Good Value, Works Well
1 December 2015 - Published on Amazon.com
Colour: WhiteVerified Purchase
After seeing the prices the big box stores wanted for a changing table pad, we ran to Amazon. We picked this up for about 50% of the big box cost.

So far we've gone through two of these pads and have been pleased. With both, we have only noticed a slight plastic smell that many other reviewers mentioned. Nothing overwhelming. We've found this pad works perfectly well and does seem to fit all standard covers.

To answer some common questions:
- The pad measures 31 1/2" long by 16" wide (see photos)
- There is a set of straps to securely buckle your child in while on the table, and a third strap for securing (with a screw) the pad to the dresser or table. There are no "grips" on the bottom of the pad. Because of its plastic outside, it's actually quite slick when placed on a hard surface.
- We've had no problems fitting several different standard covers, from different makers, to this pad

Be aware that, while the plastic itself is waterproof, the "quilted" perforations in the cover appear to let liquid soak in. I happened to be changing my son while our covers were being washed and he had a blowout. I cleaned up the poo immediately and expected it to wash away. But as you can see (photos attached), some of it seems to have gotten through and permanently stained the pad. Obviously a perfect storm of events for that to happen, but wanted to point it out.

Overall a good purchase, especially for the price.
Read more

Karen
5.0 out of 5 stars Recieved a different model this time
18 April 2015 - Published on Amazon.com
Colour: WhiteVerified Purchase
I've had this changing pad for 3 years now, It is amazing! My three year old still fits on it for diaper changes. Even if you don't have a changing table you can store it under your crib and pull it out as needed. No rips or tears 3 yrs later! Its so convenient to have a pad to change messy diapers on. It didn't have any smell when I received it and it still doesn't now. We put two covers over each other and just take the top on off if it gets dirty. All standard covers fit well. I will be ordering another one for new babys room as well
UPDATE:
The new one that came in is not the same model # and has slightly shorter contoured sides. The sides don't come up to a point/look triangly instead it is a squared top. Not sure if this is an update or a whoops but summer brand who I called has not heard of this pad with this model #, yes that is kind of scary how the company hasn't heard of a product that I received from their brand/their tags are on it. This ones model # is 92870z and not the 92000z as listed
Read more

367 people found this helpful
Go to Amazon.com to see all 5,581 reviews 4.6 out of 5 stars
Free & fast delivery, movies and more with Amazon Prime
Prime members enjoy free & fast delivery, exclusive access to movies, TV shows, games, and more.
> Get started
Back to top
Get to Know Us
Connect with Us
Make Money with Us
Let Us Help You
© 1996-2020, Amazon.com, Inc. or its affiliates