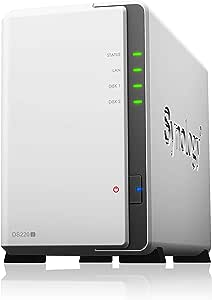 Your own private cloud

DiskStation offers big storage capacity for housing your movies, photos, or important data, making it easy to create your own private cloud and maintain complete control over your data. Synology’s DiskStation Manager (DSM) operating system simplifies the process of backing up your computers, accessing your files from anywhere, storing multimedia, and more.

*Performance figures may vary depending on the environment, usage, and configuration.

Synology devices are built with security in mind. Every DiskStation comes equipped with tools like Auto Block and Two Factor Authentication to help keep data safe and reduce the risk of unwanted parties from accessing the system. For even more security, DiskStation supports military-grade encryption technology giving you amazing protection.

T.M.
1.0 out of 5 stars Horrible Fluffy Bunny Cloud Storage Thing (not a NAS)
18 September 2020 - Published on Amazon.com
Verified Purchase
I wish I could rate this thing -5000 stars.
I just want a box to put some drives in and then mount them on my PC over ethernet. Normally such a device is called a NAS. I made the mistake of buying this abomination thinking it was a NAS, but its not. Its some sort of fluffy cloud access thingamabob. Silly me thinking that since they call it a NAS I was going to be able to ATTACH it to a NETWORK and use it for STORAGE. Nope.
I had to download the operating system and install it on my hard drive. What? I had planned to put drives in that already have partitions and data on them. Not reformat and install some crappy OS I've never heard of.
Next, I cant get it to even create a volume on the drive that it formatted.
Maybe if I can figure out how to create a volume, maybe I'll be able to access it over ethernet. NOT over internet. I have no use for that fluffy bunny stuff.
If you want a fluffy bunny cloud storage device and don't really care about anything other than "oooo, I can access my files from ANYWHERE!" then maybe this thing is for you (I didn't test that part of it, so who knows?). If you want local NAS storage, this is the WRONG device. If you want to put standard formatted drives in it, its the WRONG device. If you don't want to fight it constantly to try to make it do what you want and only what you want, its the WRONG device. There aren't words to describe how much I hate this thing. I have never hated anything I bought on amazon this much. I think I'll take it out and shoot it tomorrow. Maybe it will make a decent target.
Read more
257 people found this helpful

Dr Dougie
2.0 out of 5 stars Beware false advertising
5 August 2020 - Published on Amazon.com
Verified Purchase
I'm generally happy with my NAS drive but, with regards to camera security, the ad says "Just connect your IP cameras and use DiskStation to manage, monitor, and save all of your security footage. All without any monthly fees." Further down it says that the model I purchased (DS220j) can connect up to 12 cameras. Turns out you can only connect to 2 cameras. For additional cameras, you have to purchase licences. To buy a 4 pack of licenses cost $199 on amazon! What HORRIBLE false advertising. True, that $199 may not be part of a "monthly fee" but the clear implication is that you can connect up to 12 cameras for free. VERY DISAPPOINTED in this misleading, fraudulent ad.
Read more
164 people found this helpful

Johnny
1.0 out of 5 stars The WORST NAS you can buy!
5 August 2020 - Published on Amazon.com
Verified Purchase
I received this product Sunday night. When I opened the box, I was greeted with a brief instruction leaflet, which gave me hope that this would be a simple and easy installation.

I was dead wrong.

So after 4 hours and 1 manufacturing reset, I got the NAS up. Like many technology companies, Synology sprinkled the usual feedback and tracking options, which I normally decline. What I didn't expect was the NAS to CRASH when I elected to not participate in the final selection during startup, which bundles acceptance to participate in their online crap with acceptance of their EULA. So, I had to reset the damn NAS, accept their BS, and then go back in and unselect their tracking garbage. Finally, after 4 hours, the NAS was configured.

I grew more concerned after the first night because I started my troubleshooting efforts and began to notice additional performance issues. While I was re-installing the NAS OS (after not accepting their tracking BS the first time), I setup a continuous ping test between my mac and NAS. Note there is only one hop, my router. Still, average packet ping time was ranging from 500ms to almost 7 seconds! WTF Synology, my dead mother can move packets faster than that! Please note, I also tested other nodes on my network which showed normal ping responses (~1ms). Also note that the NAS is on a terrestrial Ethernet, configured for 1GB (as described in the countless articles I researched). I also attached another node to my ethernet port on my router to ensure that was not the problem (it wasn't).

Anyway, as day 2 started to stretch into the evening, I did finally get Time Machine to work with 2 Macbook Pros. This time, the backups would start, then stop. I first thought this was a Time Machine problem, thus spending the rest of the evening troubleshooting that. After exhausting all ideas, I decided to leave things alone as one article I read explained initial Time Machine backups take longer than most anticipate. So, again after a late night troubleshooting, I went to sleep and decided to check again in the morning.

Sure enough, backups did not work. Only 1 GB was moved during the night. However, a new feature has emerged; I can no longer log into the NAS! It gets to the login screen, and thats it! Couple of power resets should work I thought, but oh no! This is a Synology NAS we are talking about here, and NOTHING can be that easy.

I've owned NAS's in the past, and yes I know they are not fast devices, but this is complete BS. Synology should be ashamed to put their names on this pile of crap. I plan to remove and return this NAS today.

I hope my review persuades others from wasting their time on this product. If you value your time and money at all, stay away from this product!!!!!
Read more
135 people found this helpful

Ron G
5.0 out of 5 stars Wonderful little NAS unit
3 July 2020 - Published on Amazon.com
Verified Purchase
It is likely the easiest computer/server setup I've ever done. Literally, open box, install drives, close cover, plug in, turn on, run setup file...done. Very quick access and write rates over my 1Gbs home wifi network. I'm very pleased with the unit and the many different features I didn't actually realize existed when I bought it, such as remote NAS access built into the DiskStation Manager (DSM).

According to my home Sense power monitor (yeah, that's a pretty little box too), the unit is drawing about 12w sitting there with drive access ongoing, so it is a low power unit, especially with two Barracuda drives. Standing 3 feet from the unit, there is no perceptible sound coming from it, so it's quiet too.

5.0 out of 5 stars Wonderful little NAS unit
Reviewed in the United States on 3 July 2020
It is likely the easiest computer/server setup I've ever done. Literally, open box, install drives, close cover, plug in, turn on, run setup file...done. Very quick access and write rates over my 1Gbs home wifi network. I'm very pleased with the unit and the many different features I didn't actually realize existed when I bought it, such as remote NAS access built into the DiskStation Manager (DSM).

According to my home Sense power monitor (yeah, that's a pretty little box too), the unit is drawing about 12w sitting there with drive access ongoing, so it is a low power unit, especially with two Barracuda drives. Standing 3 feet from the unit, there is no perceptible sound coming from it, so it's quiet too.