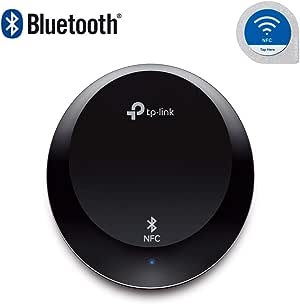 Style: Bluetooth Audio Adapter
Technical Details
Additional Information
Feedback
Would you like to tell us about a lower price?
If you are a seller for this product, would you like to suggest updates through seller support?

TP-Link HA100 Bluetooth Music Receiver stream music wirelessly from your smartphone/tablet. Or connect to any stereo/stand-alone speaker via Bluetooth. Connect with your Bluetooth or NFC-enabled device, using the HA100 or NFC Tag.

Phantom-X
5.0 out of 5 starsClear sound quality, no alternator hum, and pairs automatically with my android device
21 March 2018 - Published on Amazon.com
Style: Bluetooth Audio AdapterVerified Purchase
I have a long commute and my car does not naturally have bluetooth. The other day, I was pulling my mpow unit out of the auxiliary port on my car and it broke. Not wanting to be without my bluetooth, I started hunting on Amazon for a new unit.

Now, my old mpow unit was good, but it had two issues which I despised:
1. Had to be powered on manually by holding the button for a few seconds
2. Had a "feedback" noise when charging and playing audio at the same time

I hated having to always turn it on whenever you got back into the car, and then having to manually pair it on my phone most of the time. But once it was on, it worked pretty well. Unless, of course, it was charging. In sync with the acceleration in my car, it would produce a subtle (but audible) feedback noise while driving. As my speed increased, so did the noise.

Fast-forward to today, when I received this unit. At first, it did not want to work. I plugged it into my aux port and charger. It turned on when my car turned on, but I could not connect to it on my phone. I read what "NFC" was, and decided I did not want that. So I restarted my phone. I turned the car back on, and this time it connected.

I then decided to drive around a bit. There was no feedback while I was driving, which was a huge plus for me. Sound quality was great, too.

I shut my car off, and the unit turned off automatically. I turned my car back on, and two magical things happened. First, the bluetooth device turned on automatically, as it had been doing. Second, my phone automatically connected to it. No manual touching of the device. No having to tap the bluetooth icon on my phone and pair it manually.

So for me, this is an awesome device for several reasons:
1. Sound quality is great so far
2. Turns on / off automatically
3. My phone pairs and connects to the device automatically
4. No humming noises or feedback sounds while driving, meaning I can leave the device plugged in and not have to worry about anything

Jon Fields
1.0 out of 5 starsBeware, Power Up Problem, AND A POSSIBLE SOLUTION
17 November 2018 - Published on Amazon.com
Style: Bluetooth Audio AdapterVerified Purchase
Most of the time is works fine and sounds great. I had it powered from a USB wall adapter that was switched on when the sound system was powered up. It gets powered up and used a few times a week. Every few weeks the HA100 would not power up. I tried contact cleaner on the USB cable, different cables, and different USB power supplies. Generally doing any of these things gets it going, but the problem reappears eventually. I see other reviews reporting this too. If you are using the HA100 in a car, I think you're going to need to be able to unplug and reattach its USB cable or power supply to force a new power up when it does not power up correctly on its own. At home, I've switched to leaving it on all the time rather than powering up with the stereo. So far that seems to be working OK.
Read more
18 people found this helpful.

Richard Martin
5.0 out of 5 starsGreat performance and features at a great price.
31 December 2017 - Published on Amazon.com
Style: Bluetooth Audio AdapterVerified Purchase
This is now my favorite BT receiver. I used them to convert old radios to BT speakers and to add BT to older audio systems. No annoying beeps or voices on connect or disconnect. It does not try to reconnect when you tell your phone to disconnect it. Easy reconnect from all my devices. Excellent sound and output voltage level. I did not try the NFC function since I don't use it. This unit has power via a USB port rather than a barrel type DC supply plug. I like this because it gives you more options like putting it in a car without BT. You can use a cigarette lighter USB supply to power it. There is NO power switch on this device so it powers up and down with its power supply perfectly. Price is great. I have no negative feedback for this product and will be ordering more of them.
Read more
18 people found this helpful.

A. Welty
5.0 out of 5 starsCant Beat TP-Link products!
15 August 2018 - Published on Amazon.com
Style: Bluetooth Audio AdapterVerified Purchase
My entire house is TP-Link... (14 different smart home devices, lightbulbs, switches and plugs) and when I saw this adapter I was hoping that I would have the same great experience I have had with all the other products. TP-Link did NOT fail to deliver! I have been using this for over a year and it was SUPER easy to install and set up (think it took all of 5 minutes to have it up and playing music) I can connect my echo devices to it wirelessly bu just asking them to connect, I can connect my iPhone, iPod, laptop, or any Android device by searching for it in in bluetooth settings. I have it connected to my surround sound stereo so even wireless play from a phone sounds GREAT! It just kind of hangs out alongside my other devices and doesn't really look like anything (which is nice) It does have a small light on it but it isn't one of those annoying bright blue lights every other company seems to think we all want blinking all over the place. Once again a 5 star SCORE for TP-Link!!!
Read more
14 people found this helpful.

Bob Koure
5.0 out of 5 starsSounds great, does not auto-connect.
16 October 2015 - Published on Amazon.com
Style: Bluetooth Audio AdapterVerified Purchase
Works perfectly for automotive.
My wife has a new Fiat, radio has aux-in (3.5mm) and USB in the glovebox. Device goes on when car on, off when car off. Audio is medium-FI (Bose) and no static (had been concerned about alternator hum). When playing lossless audio (FLAC -> samsung note 3 - > this BT receiver sound is unconstrained (not that I'm a golden ears or anything). One of my friends has a no-name BT receiver, and given a blind ABA I can tell when it's this receiver (sounds better).

Cons: Does not automatically connect when powered on, so you need to connect from the phone end. If you have an Android device and use car mode this is dead easy to automate (plugins/secure settings/actions/connect BT TP-LINK). I expect it's like this because the designers were aiming at the home market, so always on (although many HT receivers *do* have switched outlets).
Read more
33 people found this helpful.
Go to Amazon.com to see all 859 reviews 4.2 out of 5 stars
Free & fast delivery, movies and more with Amazon Prime
Prime members enjoy free & fast delivery, exclusive access to movies, TV shows, games, and more.
> Get started
Back to top
Get to Know Us
Connect with Us
Make Money with Us
Let Us Help You
© 1996-2020, Amazon.com, Inc. or its affiliates