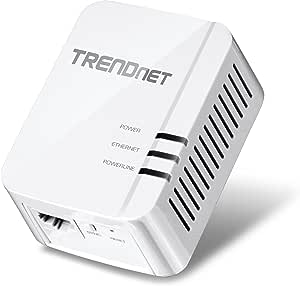 TRENDnet’s Powerline 1300 AV2 Adapter, model TPL-422E, creates a high-speed Powerline 1300 network using your home’s existing electrical system. Two adapters are needed to start a network. TRENDnet adapters are protected with 128-bit AES Encryption. Plug in the first adapter and network it to your existing router. Plug in other adapters on the same electrical system and they auto-connect to the first adapter for instant internet access.
Simple Plug-in Installation
No configuration needed – simply plug in TRENDnet Powerline adapters and they will auto-connect out of the box.

Joel P
1.0 out of 5 stars Very misleading claims and lousy support
8 May 2020 - Published on Amazon.com
Capacity: AV2 1300Model: Starter KitVerified Purchase
Purchased this, installed in my home. Getting less than 5% speed regardless of where I install the two adapters. Even when installed in the same circuit on a common wall with only 10' feet between the two outlets, still getting less than 5%. Move it as far away as possible in my shop, still getting 5% of my speed when plugged into the router. TRENDnet support blames my electrical wiring, says my house must have something wrong in the circuit panel creating noise.

Okay, take it to my friend's house. Five-year-old house, same exact story. Less than 5% of the speed coming from ethernet plugged into router directly.

Take it to another friend's house. Same thing.

Contact TRENDnet support again, they say we must all have the same problem.

Return item to Amazon, rate 1 star, buy ethernet cable, spend 1 hour running it through attic and down wall, and I go from 15 Mbps using this piece of junk to 460 Mbps.
Read more
11 people found this helpful

S. Long
4.0 out of 5 stars It just WORKS ... maybe with a little bit of a tweak, for gaming.
21 December 2018 - Published on Amazon.com
Capacity: AV 500 Pass-ThroughModel: Starter KitVerified Purchase
Ever since moving in with family, I have had serious networking woes. The (wireless) router is only twenty or twenty-five feet away, on the same floor .... but there's a bathroom in between, so, plenty of copper pipes. And the neighborhood is chock FULL of a huge number of wireless networks.

So my connection was unreliable, weak, and just generally .... bad. Very, very bad. The internet should be 200Mbps; I was lucky to get KILOBYTES per second on 2.4GHz. And on 5GHz, the signal strength was barely enough to register, sometimes, so I'd have frequent drops.

When these two units arrived, I simply plugged them in to the wall, used the (included) ethetnet cables to connect the router to one, and my PC to the other, and .... voila! Internet!

I did have one problem: when playing some games, the device's "power save mode" will activate, and internet connection can be lost. I did some searching, and the answer was to write a batch file that would ping the Default Gateway once per second for as long as the computer is on. A couple tricks to do it in the background, and, problem solved.

It never gets the 140+ MBps speeds I occasionally saw with 5GHz networking, but it does consistently get 60-90 MBps. Importantly, it never _drops_ me entirely (now that I've got that ping going).

And frankly, that's plenty fine for me.
Read more
14 people found this helpful

J. Snow
2.0 out of 5 stars Blocks the other plug; killed my wifi
2 April 2019 - Published on Amazon.com
Capacity: AV 500 Pass-ThroughModel: Starter KitVerified Purchase
Pros:
1. The two adapters connected automatically and were easy in that regard. Basically, just plug in each one and they take care of the rest.
2. The price was great. A quick scan on Amazon and you see you could spend a lot more on powerline adapters.

Cons:
1. Like others have said, it blocks part of the other outlet, so you can't put a 3-prong plug into the remaining outlet when the powerline adapter is plugged in. A 2-prong plug fits fine, but it's frustrating that a 3-prong won't fit. It sort of remedies this by having its own pass-through outlet, but it would be nice to still be able to use the other one.
2. When it was connected, it killed my wifi. So the powerline connection was working great, but suddenly no other machine could use the internet/network anymore because my wifi was dead. This was my first time using powerline adapters, so maybe I made a mistake. I had one end plugged into an old computer and the other plugged into my router to supply the network connection. Not sure what my mistake would have been, but I couldn't find any information online about powerline adapters interrupting wifi signals, so maybe it's just my router.

Due to the two cons above, I returned the product.
Read more
12 people found this helpful

J. Hernandez
2.0 out of 5 stars Meh, Not trash, but bad instructions, bad software, and unable to achieve rated speed.
17 July 2020 - Published on Amazon.com
Capacity: AV2 1300Model: Starter KitVerified Purchase
First off: No GFI, No AFCI, No Incandescent, and no Fluorescent lighting (LED), connected directly to the wall. (tested in multiple spots in the house).

Few Issues I have:
1. Setting the encryption up per the instructions(manual and website) appears to be wrong:
You do not hold down the sync for 15 sec, and go to another and press for 3 sec. Press sync button for about 6 seconds, when the lights turn off, release. Go to the other unit, do the same. This is how I got mine to sync up with a new encryption.

2. Speed is ok, but not close to the rating:
In speed tests I got anywhere between 80Mbps to 200Mbps, not bad, but definitely not what it is rated at. As you can see from the tests. My first test used my wired network: Download upload speed is 870/35. I have a gigabit backbone in the house, I was testing these powerline adapters for install at a client (IT Guy here). The second and third test are using my ethernet port and the powerline adapters (at different points in the house). I know it is not a conclusive test but gives you a good idea.

3. Be careful with the setup software. It uses winpcap. This software is no longer supported and has a vulnerability that lets the DLL be hijacked. If you use the setup software, you should uninstall when complete.

The Good: can hit 250 Mbps, so for my client it will be fine because their internet is only 100Mbps.
The Bad: Bad instructions, non-updated configuration software, and invalid specs.

The 2 star is because I am not going to return it because it meets my need, but if you are trying to push 4K video or have a faster internet, there might be better solutions.
Read more

6 people found this helpful
Go to Amazon.com to see all 277 reviews 3.6 out of 5 stars
Free & fast delivery, movies and more with Amazon Prime
Prime members enjoy free & fast delivery, exclusive access to movies, TV shows, games, and more.
> Get started
Back to top
Get to Know Us
Connect with Us
Make Money with Us
Let Us Help You
© 1996-2020, Amazon.com, Inc. or its affiliates