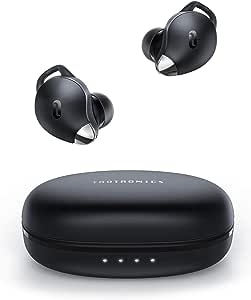 Colour: SILVER BLACK
Technical Details
Additional Information
Feedback
Would you like to tell us about a lower price?
If you are a seller for this product, would you like to suggest updates through seller support?

TaoTronics - Technology Enhances Life
TaoTronics, a flagship brand under the Sunvalley group, is dedicated to providing superior-quality, reasonably priced electronic products that improve the lives of our customers. We strive to develop, innovate and focus on utilizing the latest technology with easy-to-use devices.

Note:
Touch Control Area on earbuds is the part with the TaoTronics Logo.

Hermant kolla
5.0 out of 5 starsBest true wireless ear buds
28 January 2020 - Published on Amazon.com
Verified Purchase
OMG.. these are the best True wire less earbuds from Taotronics. The highs and lows are perfect. The beat is right level. They are perfectly sized to fit in ear and I use it for my daily workouts. Pairing is very simple and never had a problem of loss of connection. The quality of the material is awesome. The silver shining tip at the end is amazing and give 300 dollar true wireless look.
USB c charging port helps a lot so I donot have to carry a microusb anymore.
Love it to the core.
Excellent product and look no further.
Read more
145 people found this helpful.

JdaClutch
5.0 out of 5 starsPretty solid first impression, almost perfect TWS
22 January 2020 - Published on Amazon.com
Verified Purchase
Sometimes I think I'm on a mission on finding the perfect wireless earbuds for me. I'm on a roll in term of getting the TWS after my Galaxy buds.

The taotronics buds came in today. And I've been testing it non stop for the last several hours since I've gotten it earlier this afternoon.

Have two of my fav TWS the Samsung Galaxy buds, earfun free earbuds to compare with.

Here are the things I like the taotronics buds:

-very solid built in term of the over material just feel solid in hand
-matte finish is a major plus, which is goes back to the built quality. Most other earbuds have that glossy cheap finish, but not these
-compact size, does not stick out
- the earbuds response to the EQs pretty well, check uploaded pictures. Sounds accurate and punchy
-battery life is more or less in line of the claimed 8 hours

What could improve uponbforbrhr next revision:

-while AAC is plenty good, but Aptx/&HD code supported is a welcoming upgrade because AAC only supports bitrate to 256kbps, Aptx is 320kbpa which is equal to CD-like quality
-Wireless charging case would be nice
-upgade from bluetooth 5.0 to
bluetooth LE for lower power consumption

Like I said, I was looking for a perfect TWS earbuds for me. This comes close, but then again nothing is perfect. There's a lot going for these taotronics
Such as good sound quality, relatively long single charge battery life (8 hours) , usb c charging, and on top of that it's solid matte finish. These are some solid earbuds that is as good as anything our there. And price is not bad at all.

Francis Chau
5.0 out of 5 starsGreat performing earbuds with comfortable fit
6 May 2020 - Published on Amazon.com
Verified Purchase
I am very happy with these earbuds. They fit my ear well with the small silicone eartips.

Noise isolation is very good with a very comfortable fit. Especially for longer period of time like during exercise or movies.

The charging case is compact and is easy to open close. The earbuds stay In magnetically.

I like the Bluetooth 5.0 performance because it auto pairs with each other and my iPhone.

Patrick H. Mullins
5.0 out of 5 starsA solid entry in the True Wireless Earbuds field.
27 March 2020 - Published on Amazon.com
Colour: SILVER BLACKVerified Purchase
The SoundLiberty 79 are TaoTronics true wireless (TWS) answer to Anker's Soundcore Liberty 2 Pro and Aukey's Key Series T10. The SoundLiberty 79 might not be packed with all of the features of Anker's offering but that's okay. Tao's offering is one-third the price and, to my ears at least, sounds almost as good.

Technology & Connectivity:
The SoundLiberty 79 are true wireless stereo ear buds that take advantage of the new Bluetooth 5.0 spec, work with the SBC and AAC audio codecs, and utilize some truly advanced noise cancelling technology from Elevoc. The onboard intelligent voice interaction tech allows for AI based noise-reduction and Acoustic-Echo Cancellation (AEC). What this means for you is crystal clear calls, in both ears no less, even while standing at the bus stop waiting for your ride. The new BT 5.0 chip means you can walk 30 meters (roughly 98 feet) from the source and not notice any drops. I'm happy to say my own tests prove this claim to be true. With these buds you can safely roam away from the source device with little to no worries.

Battery Life:
So how long can these things go with out a recharge? Try 8 solid hours of play time before having to be placed back in their case. Speaking of the case, it's extremely small, charges via USB-C, adds up to 40 hours of playtime, and forces the buds into pairing mode when they're removed from the case. This is great if you want to pair them to something other than the last paired device.

Controls:
There are no physical buttons to press. Instead, the surface of each bud is touch-sensitive and requires just a light tap, double tap, and/or triple tap to activate the controls. I won't cover every control available but here are the most important ones:

There are other controls for taking and receiving calls and controlling the AI assistant. You get the idea. Truth be told, I had some trouble getting the touch controls to work properly. When I thought I was turning down the sound I ended up actually pausing the music or at worst skipping to the next track. Take this with a large grain of salt, though, as I'm one of those people who simply prefers physical controls.

Sleeper Test:
I’m a side sleeper and I had no problems wearing these when I went to bed. They fit flush with your ears, don't stick out like many other TRW buds, and don’t cause any discomfort at all. Bonus! I didn’t experience any accidental activations of the touch controls while doing the sleeper test. That's always a good thing.

Music/Audio Quality:
When I review headphones I typically like to talk about things like driver specs, Unfortunately, I searched high and low and was unable to find any meaningful information regarding the driver tech used in the SoundLiberty 79. That being said, I admittedly wasn’t expecting much given their low cost and extremely small size. However, I, like many other reviewers out there was pleasantly surprised with the solid, unexpectedly low bass, satisfying midrange, and crisp highs. Overall, I’d rate the sound quality of these tiny buds as better than average. They don't sound as good as say, a $200 set might, but they still manage to sound pretty darn good, and at the end of the day, that's all that really matters.

Cons:
1. You must disconnect from the last paired device before connecting to another one. This is typical behavior these days but it shouldn't be. My Bose SoundSport Free wireless buds can connect to five different devices and switch between them with a simple press of a button. They're also three years old. There's simply no excuse for not including this tech in modern TWS earbuds.
2. The case was not designed for larger foam ear tips. You can force them in there, and they will charge, but it's not an easy task.

Overall, the SoundLiberty 79 is a solid entry into the field of TWS ear buds and should be high on your list if you're looking for a set of stylish earbuds that sound good, last most of the day, and that can easily take calls in noisy environments.
Read more
50 people found this helpful.

Douglas
5.0 out of 5 starsEverything you need - Great Bass & Treble Calibration / AAC HD Audio / Noice Cancelation / USB-C
22 February 2020 - Published on Amazon.com
Colour: SILVER BLACKVerified Purchase
These earbuds became my day-to-day official use. Why?
The SOUND is great! Great Bass, greate Teble, once you wear them, you can feel the noise cancelation.
These earbuds are powered with the HD audio codec: AAC. You can feel the difference.
Because of the IPX7 I can shower with them and have no problems.
If feels nice in my ears,
I can charge the case with the same cable as my phone. USB type C. Thanks TaoTronics, USB-C is the future.
If you are in doubt , consider to buy this !
Read more
53 people found this helpful.
Go to Amazon.com to see all 2,092 reviews 4.3 out of 5 stars
Free & fast delivery, movies and more with Amazon Prime
Prime members enjoy free & fast delivery, exclusive access to movies, TV shows, games, and more.
> Get started
Back to top
Get to Know Us
Connect with Us
Make Money with Us
Let Us Help You
© 1996-2020, Amazon.com, Inc. or its affiliates