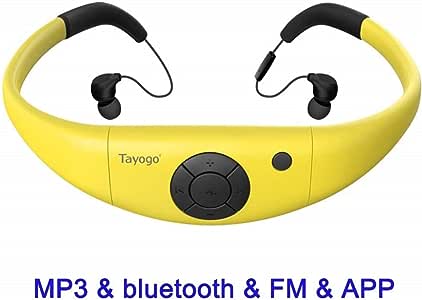 by Tayogo
3.7 out of 5 stars 774 ratings
International product from outside Singapore
3 new from S$86.36

Colour: MP3&Bluetooth-Yellow
Technical Details
Additional Information
Feedback
Would you like to tell us about a lower price?
If you are a seller for this product, would you like to suggest updates through seller support?

Do you want a headset that integrates MP3 and conversation? Do you want a mp3 with 8GB memory which can download 2000 songs ? Do you want a MP3 swimming headset with FM and timer? Try to Tayogo's W12 MP3 swimming headphones!
Bluetooth 4.2: Clearer sound quality, more convenient listening to songs and calling!
FM Radio: Listen to real-time newsletters
Running Timer: Calculate your exercise steps and consumed calories to facilitate your health management.
Creative APP, self-built playlist: free to create a list of songs, define favorite music library is no longer confined to sequential random single loop.

NOTE:
1. Please refer to the incorrect usage described in the picture. Do not damage the product.
2. Please disassemble the host according to the correct method, otherwise MP3 will be damaged.
3. Do not charge or copy when the host USB charging head has water.
4. Please select the correct earbud according to the use scene.
5. Please rinse the product with water after swimming. Do not expose it to sunlight.
6. Please read the user manual carefully before use.
7. Music File Support: MP3, WMA, DRM, OGG, APE, FLAC, WAV, ACC-LC, ACELP, Audible
8. System Support: Windows ME / 2000 / XP / Vista, Windows 7, Mac OS0 9.X and above

Barry Dahl
4.0 out of 5 stars14 months of use - here's the review
29 March 2019 - Published on Amazon.com
Verified Purchase
I received this as a Christmas gift in December 2017. I started using it in early January 2018. Here's what happened.

Early months: was pleased at how easy it is to add or remove music - just drag and drop (on Windows, anyway). I use the largest/longest ear buds. They would fall out once in a while, but overall stayed in pretty well. They don't completely block the water as really good earplugs do, but fairly close. I found that not pulling my swim cap over the ears was better, since swim cap movement tends to pull the buds out of my ears.

First issues about 6 months in: at this point the ear bud pieces would come off the studs fairly easily. They just no longer gripped. I experimented a bit, and found that Liquid Nails was a good solution. See photo. By applying Liquid Nails to the seam where the ear buds went on the studs, they stopped coming off. Totally stopped. Never have had one come off since. I reapplied a thin layer of Liquid Nails about every month or two just to be sure.

At 13 months I ran an experiment of not charging them to see how long they would go. I was somewhat shocked as I swam 18 times before the battery died mid-swim. Approximately 15-16 hours of use time on a single charge for the 13-month-old device. I'll take it.

At 14 months, I lost sound in the right ear when the thin wire leading out of the yellow plastic frayed. It hasn't completely broken off, but it might as well. In retrospect, this thin connecting space is another place where a bit of liquid nails might have paid off - before the wire was damaged.

The sound is okay (for me, not an audiophile), but nothing is going to be great while splashing around in the pool. I find that the music really helps me keep going while lap swimming. I swim laps on average 4 days a week, usually a little less than an hour, so probably 3 hours per week, on average. So, during the 14 months of use, I probably swam for about 180 hours.

So, was it worth the price I paid? Yes, I would say so. Nothing like this will last forever. I feel like I got pretty good value out of these things. Guess I need another one.

Matthew
5.0 out of 5 starsGreat for tunes while swimming laps
10 April 2018 - Published on Amazon.com
Verified Purchase
I recently began swimming laps for exercise. I have always listened to music when working out and was frustrated by the need to leave my usual earbuds in my gym bag while in the pool. This MP3 player solves that problem.

At first I thought waterproof bluetooth earbuds would be the best choice for me but it turns out bluetooth doesn't transmit well under water. I gave this MP3 player a try and am very happy with it. The sound quality from it while in the water is not as good as what you'd get from high quality non-waterproof earbuds but it is still pretty good- amazing considering The MP3 player pops out of the back of the headband and then plugs into a USB port to be loaded. Loading it with music just required dragging and dropping the songs I wanted onto the icon for the MP3 player. I swim 45-60 minutes per day, 5-6 days/week and have gone 2-3 weeks without charging this. I've never had the battery die on it so I don't know how many hours of play you could get out of it before needing to charge it.

I have a fairly big head but this fits comfortably. It does not interfere with the straps for my goggles and controlling it while wearing it is easy as the volume, pause/play, and rewind/fast forward buttons are intuitively placed. The earbuds do get a bit warm in your ears while using this, but not uncomfortably so. The wire from the headband to the earbuds does seem somewhat fragile, so I am careful about never pulling the headband off my head by the wires or pulling the earbuds out of my ears by the wires. I know others reviewing this have found those wires to be a failure point. I'll update this review if that is ever an issue for me.

N. TROVATO
4.0 out of 5 starsGreat customer service.
7 August 2018 - Published on Amazon.com
Verified Purchase
Ugh. Another temperamental item. Worked fine until it didnt. After a month maybe, i noticed the unit that holds the music had to be snapped open and held that way in order for the music to play in both phones. Omce you snap it open, it angles the digital teeth upon each other, otherwise, i suppose they float and dont make a connection.

UPDATE: After the above review, i was contacted by customer support. "Jesse" acquired my number, contacted me, and immediately knew what the issue was with the unit. He then sent me a new one, completely free of charge, and advised me on how to handle it going forward.

MT
4.0 out of 5 starsGood set of swimming headphones
16 August 2018 - Published on Amazon.com
Verified Purchase
I purchased these headphones for the sole purpose of lap swimming. I had previously tried a pair of waterproof Bluetooth headphones but Bluetooth does not travel through water so they only worked if my head was above water. I use this set an hour a day 5 days a week. I have had them for three weeks and they have worked flawlessly in that time. I charge the unit on the weekend as I do not want to run out of battery and not have them available when needed during the week.

They are a little awkward to put on mostly because I am not used to wearing headphones that go over my ears. However, once I am in the water and they settle onto my head they are very comfortable and I do not even realize they are there - except for the music playing in my ears. The ear piece is constructed in such a way they do a good job of keeping water out of my ears and the sound from the headphone is very good.

For lap swimming, these are as good as I could expect! I would not use them for everyday use as there are much more comfortable bluetooth headphones available.

MrPaddy
5.0 out of 5 starsFinally a product that works!
20 May 2018 - Published on Amazon.com
Colour: MP3&Bluetooth-WhiteVerified Purchase
Its comfortable both in and out of the water for long periods of activity, plenty of battery life too. Love the option of bluetooth or internal memory, I cant always have my phone near me but being able to load up a few thousand songs or listen to the radio is an awesome trade off. Did a 2000meter swim using bluetooth and I never lost connectivity, this morning I decided to load up a couple of work out playlist and busted out a 7 mile run until the rain caught me, but I didn't have to put them away since they are truly waterproof. I know it's not band name but this company is going places!
Read more
20 people found this helpful.
Go to Amazon.com to see all 697 reviews 3.7 out of 5 stars
Free & fast delivery, movies and more with Amazon Prime
Prime members enjoy free & fast delivery, exclusive access to movies, TV shows, games, and more.
> Get started
Back to top
Get to Know Us
Connect with Us
Make Money with Us
Let Us Help You
© 1996-2020, Amazon.com, Inc. or its affiliates