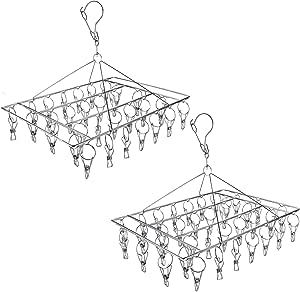 
Value pack of 2, each is 16-1/2 inches in length x 11-3/4 inches in width, hook open is 1-3/4 inches. One with 30 clips and the other with 36 clips.
Rust Resistance - Made of quality solid stainless steel with 4 mm rods, strong and durable to holds up to 10 lb each.
Swivel hook allows you to effortlessly rotate the rack. Easy latching safety lock prevents the hook from falling off.
Strong clips hold tight and snug to avoid slips. Suitable for interior or exterior use. Assembly free!
Great for hang and air-dry towel, underwear, scarf, panties, bras, shirt, tie, hat, socks, masks, handkerchief, and more!

DelmarvaGirl
4.0 out of 5 stars Impressive Size, Impressively Light, Great Value for the Price
13 March 2020 - Published on Amazon.com
Verified Purchase
I received the product today. It seems pretty sturdy, but the hook closure that secures it to the rod/line/rack that you hang it on seems a little... not complicated but not simple either... you have to use both hands to close the securing clip.

Overall, it does seem like they are a nice product - both are quite large, giving plenty of drying space.They don't seem bulky. Both seem nicely made, and have a nice appearance. Both are light weight. The consturction seems to be as such that you could add additional hooks to the one with just 30 but they wouldn't attach quite the same way - they'd attach to the frame itself unlike the others. The others are attached in gaps created by a small wire or rod that is attached to the main frames of the products. Even if those rods break down the line (I don't see them breaking but you never know), you can continue using the products by attaching the rings to the frame itself.

Edit: like most clothes pins, the spiral piece slips a little to prevent it from opening. These are easier to fix though, just push the straight part that crosses over the wound spiral back over the spiral and it fixes it.

Seems to hold more weight than I thought. I ended up hanging a bra, several pairs of panties, a few dish towels, a pair of leggings, and two pairs of size 12 petite jeans on it at the same time - same laundry load and the pants were hung like they were pinned to a clothes line - and it held it all with absolutely no indication of an issue.

Melissa M
5.0 out of 5 stars Perfect for drying smaller items
7 July 2020 - Published on Amazon.com
Verified Purchase
These are perfect for drying small clothes items like underwear, socks, microfiber rags, and face masks. I needed something to make drying easier for smaller items. I dry my clothes on a clothes rack with hangers and so hanging small items was always a hassle
Read more
7 people found this helpful

Bianca
5.0 out of 5 stars Brilliant
1 October 2020 - Published on Amazon.com
Verified Purchase
O.. M.. Gee! I love it! I don’t put any under garments in the dryer and these do the job well! Love the clips! It holds so many and you could hang it pretty much anywhere where the hooks grip (I always use the door frame, it’s a habit lol). Also great for socks and other small things.
Read more

5.0 out of 5 stars Brilliant
Reviewed in the United States on 1 October 2020
O.. M.. Gee! I love it! I don’t put any under garments in the dryer and these do the job well! Love the clips! It holds so many and you could hang it pretty much anywhere where the hooks grip (I always use the door frame, it’s a habit lol). Also great for socks and other small things.
Images in this review

Nicole
5.0 out of 5 stars Wonderful product.
27 September 2020 - Published on Amazon.com
Verified Purchase
I love these! I wish I had found them sooner. Being a mom with little kids these are GREAT! I can put all their little things on these ( like socks, undies, shorts and even some shirts). I'm sure I could put more weight on them but my thing is I have a shared clothesline with tge neighboring apartment so space is limited these help control that space and still allows me to get the dry. Id I run out of space outside ( which has happened before) I can easily hang the up in my bathroom on my shower curtain rod. I have recommended these to everyone I know that likes to line dry their clothes or has to because they can't have a dryer.
Read more
4 people found this helpful

Jason
5.0 out of 5 stars Strong clips
8 July 2020 - Published on Amazon.com
Verified Purchase
Work great for drying items. I used a cable to hang one under the other. Easy to spin to check everthing drying. Clips are strong and hold alot. Need to balance it out of hanging from the center, but could easily be hung from the corners for more stability.
Read more
5 people found this helpful
Go to Amazon.com to see all 52 reviews 4.6 out of 5 stars
Back to top
Get to Know Us
Connect with Us
Make Money with Us
Let Us Help You
© 1996-2021, Amazon.com, Inc. or its affiliates