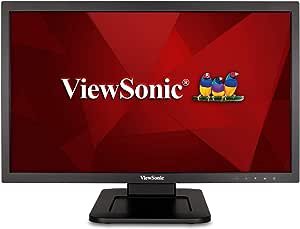 by ViewSonic
4.3 out of 5 stars 259 ratings
Currently unavailable.
We don't know when or if this item will be back in stock.

The 22" (21.5" viewable) ViewSonic TD2220 is a multi-touch Full HD LED backlit monitor with 1920x1080 resolution, integrated speakers, DVI & VGA inputs and VESA mountable design. It has 20,000,000:1 MEGA Dynamic Contrast Ratio for sharp crisp images, and Eco-mode come standard in the new 22" (21.5" viewable) offering. Perfect for both commercial and consumer applications, the TD2220 supports the USB HID Touch driver and is fully compatible with Windows 7. The TD2220 is a one-stop solution for your multi-touch monitor needs. You will also get the most out of your investment with ViewSonic's strongest pixel performance guarantee, 3-year limited warranty, as well as ENERGY STAR and EPEAT certifications. Touch the Difference with the ViewSonic TD2220 interactive multi-touch display.

The 22" (21.5" viewable) ViewSonic TD2220 is a multi-touch Full HD LED backlit monitor with 1920x1080 resolution, integrated speakers, DVI & VGA inputs and VESA mountable design. It has 20,000,000:1 MEGA Dynamic Contrast Ratio for sharp crisp images, and Eco-mode come standard in the new 22" (21.5" viewable) offering. Perfect for both commercial and consumer applications, the TD2220 supports the USB HID Touch driver and is fully compatible with Windows 7. The TD2220 is a one-stop solution for your multi-touch monitor needs.

Drrchrds
1.0 out of 5 stars Touch calibration constantly goes off.
7 November 2019 - Published on Amazon.com
Model: TD2220Style: 22-InchVerified Purchase
I am hating this thing because the calibration of the touch location goes off all the time. One minute it is fine, the next, it thinks my finger is a good inch or more from where I am actually touching. This has consequences. It causes me to click things I don't mean to click, or to close programs I didn't intend to close. I suspect that it has to do with the fact that I don't use it at it's native resolution. Perhaps the monitor randomly defaults back to native resolution for touch causing the touch to no longer align with the pixels on the screen? Also, the frame of the monitor is sensitive to touch in a weird way. I have it mounted on a moving monitor arm and if I move it over by squeezing the plastic frame, the screen responds as if I have clicked the upper right corner which just so happens to be the "x" that closes whatever happens to be on top! That is so frustrating. I have no complaints about image quality or color. But, I need a touchscreen for what I do and this thing is a constant headache. By the way, there is a 'quick fix' when calibration goes off: turn the monitor off and back on. That solves it, but the power-off/on process takes about 7 seconds which feels like a long time when someone is standing there waiting for you to do something on screen.
Read more
29 people found this helpful

Alfonso P. Posadas Jr.
4.0 out of 5 stars "Plug-in and Play is the key"
1 October 2015 - Published on Amazon.com
Model: TD2220Style: 22-InchVerified Purchase
Well what can I say that other customers have not made mention of this product? It's a very economical touch screen monitor, considering that others are between $400 and $600 for just a functionality. Bigger screen? Possibly, but if all that is required is the ability to manipulate objects with your own fingertips rather than a mouse whose left mouse button can get worn out. It has some accuracy issues with more finite objects on screen such as the "X" button on tabs for internet browsers, but overall it's a more economical purchase. My only central annoyance of the product is that it cannot tilt far enough to allow one to, somehow, manipulate the screen as if one used a tablet. I have yet attempted to see if the touch screen is usable with a stylus or not, but I'm sure a few of you have done so.

Oh! Before I forget, there's a strange little quirk that I had noticed when I had used the touch screen recently. Apparently one does not need to physically touch the screen in order to register the touch as a mouse click. Just hover above the screen, but that's not exactly the most natural of positions so what have you.

When I had first received the product and downloaded all the necessary programs, the touch screen did not respond to my actions. It was infuriating and I went to ViewSonic technical support, Microsoft Community because my computer was upgraded to Windows 10 months ago, attempted to find the correct drivers, even voted on said Microsoft Community that the touch screen monitor was not compatible with Windows 10, then I got worried that I got the incorrect product since one of the directions warned about fingerprints on the monitor being difficult to remove. Why put such a warning on a touch screen device? Was it not meant to be touched?

Then after nine hours of such frustration, I kid you not, I received an E-mail reply from one Aljhon of ViewSonic Support and there was a statement at the end of that message that went "Installing monitor is not required or necessary. It will work as plug and play device." After a few moments of updating all possible drivers through the Device Manager, I thought what would happen if I unplugged the USB cable from the PC while connected to the internet. So I tried so and not only did Windows 10 recognize it as a touch screen monitor, it also automatically downloaded the necessary drivers to operate properly. As you can imagine, I was filled with joy that I finally gotten the touch screen monitor to actually work on Windows 10 and annoyance that I did not think of trying such an action in the first place. The directions for installing the device instructed that I plugged the USB into the PC before I began software installation from the included disk, it did not make any mention of unplugging and replugging the USB cable back into the PC with an active internet connection.

So a bit of advise for those who choose to purchase this product: Once you've installed all the programs on the disk, make sure that you have an active internet connection and replug the USB cable back into the PC. Don't be like me and go for nine hours of frustration. It's much more simpler that way.
Read more
83 people found this helpful

D. Tobis
2.0 out of 5 stars Good monitor, be careful of Sunlight
15 April 2018 - Published on Amazon.com
Model: TD2421Style: 2 point touchVerified Purchase
I Purchased this monitor and was immediately pleased with the resolution and the picture.
I would leave the monitor unattended and come back and notice that my desktop was completely unorganized and on occasion the cursor/mouse pointer was going crazy. It took me a few times to figure out that every time the sun shone in the window it would detect the sunlight as if it were my fingers and wreck havoc to my desktop and my computer. I emailed customer support to find out if there was anything I could do to minimize this problem, the reply told me to put a cover over the monitor. Here is a copy of that email-
“Hello John,
Thank you for contacting ViewSonic. This issue occurs due to the monitor being an optical touch unit. This means the monitor has infrared cameras that register when someone touches the screen. When the sun shines in these cameras the monitor registers it as a touch. I recommend getting a cover or a hood for the monitor. ”

How you view and use a monitor with a cover on it is beyond me but that’s what I was told to do to solve my problem. The quality of the picture of the monitor is great, but I purchased this monitor for its ability to be used as a touchscreen with my navigation program. Because it is unsafe for me to keep the touchscreen portion of the monitor active I keep the USB interface unplugged, therefore it doesn’t act as a touchscreen just an very expensive but good monitor. This is the reason I gave it only two stars… John
Read more
31 people found this helpful

Phenixman
5.0 out of 5 stars For a POS (Point of Sale) system, not a POS
4 August 2013 - Published on Amazon.com
Model: TD2220Style: 22-InchVerified Purchase
This monitor was purchased to replace a failed monitor to my Point of Sale system (register) in my business, "Zorfs" in Phoenix. This monitor was a definite upgrade to the previous one, being larger and thinner. The POS system requires a touch screen, a DVI input, and a USB input to operate correctly. This monitor met all these requirements. The company servicing my POS quoted me a price of $400.00 to replace the failed monitor with the smaller design. This monitor was almost half that cost. The touch screen works so much better than the previous unit. My bar tenders love it saying it's as responsive as an iPad screen. The colors are very vivid, the screen very attractive having minimal border edging. ViewSonic has already established a reputation as being very reliable and I hope and anticipate my monitor will be another quality item from this company. I plan on purchasing another monitor just like this one to replace the other (working) POS monitor in my restaurant/bar.
Read more
72 people found this helpful
Go to Amazon.com to see all 158 reviews 3.5 out of 5 stars
Back to top
Get to Know Us
Connect with Us
Make Money with Us
Let Us Help You
© 1996-2021, Amazon.com, Inc. or its affiliates