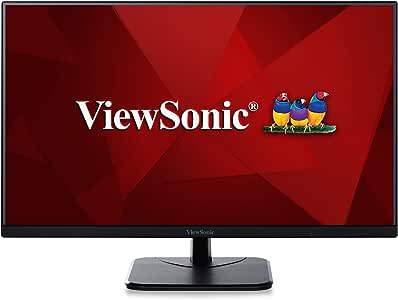 Style Name: 24-Inch
Technical Details
Additional Information
Feedback
Would you like to tell us about a lower price?

With future-proof connectivity, the ViewSonic VA2456-mhd is a productivity-boosting monitor perfect for business professionals. Designed with SuperClear IPS panel technology for wide-angle viewing and incredibly vivid colors, this monitor also features a 3-sided frameless design for a seamless viewing experience in multi-monitor setups. Extensive connectivity options include VGA, HDMI, and DisplayPort so that you can connect to a variety of HD and analog devices – today and tomorrow. In addition, Flicker-Free technology and a Blue Light Filter help to minimize eye strain from extended viewing periods. With ViewSonic’s industry-leading 3-year limited , this monitor is a solid long-term investment for enterprise and home applications.

With future-proof connectivity, the ViewSonic VA2456-mhd is a productivity-boosting monitor perfect for business professionals. Designed with SuperClear IPS panel technology for wide-angle viewing and incredibly vivid colors, this monitor also features a 3-sided frameless design for a seamless viewing experience in multi-monitor setups. Extensive connectivity options include VGA, HDMI, and DisplayPort so that you can connect to a variety of HD and analog devices – today and tomorrow. In addition, Flicker-Free technology and a Blue Light Filter help to minimize eye strain from extended viewing periods.

Mount the monitor as you see fit using its convenient VESA-compatible mount design.

Mike Stefanik
2.0 out of 5 starsExercise caution when using for office work, particularly text editing
25 December 2018 - Published on Amazon.com
Style Name: 27-InchVerified Purchase
I purchased two of these monitors to replace two older Dell monitors, primarily used for software development (so a lot of coding and text editing in general). They were priced attractively with all of the features that I needed.

The Good: A good price for a 27" monitor, DisplayPort and HDMI connections with built-in speakers that sound fine for what I expected and needed. I didn't notice any significant display issues with video or graphics, and performance was fine.

The Bad: They refused to go into a sleep state when using a DisplayPort connection, no matter what the settings were (both on the monitor changing the version of DisplayPort used, and with the video adapter itself). This was a nuisance, but not the central reason why I ended up returning them.

The Ugly: The real reason I returned both of them was the absolutely terrible display of text, particularly dark text on a light background. No change to the monitor settings, adjusting ClearType settings (or disabling ClearType entirely) would completely mitigate the issue. It was the same regardless if DisplayPort or HDMI was used, and prolonged text editing or reading was enough to produce eye strain and headaches over the short time I used them.

Bottom line, if you're only going to use these for streaming video, etc. then they're not bad and you'll probably be okay with them. On the other hand, if you're thinking of using them for office work, think again. Your eyes will thank you.
Read more
28 people found this helpful.

Michael
1.0 out of 5 starsMajor Quality Issues
7 June 2019 - Published on Amazon.com
Style Name: 24-InchVerified Purchase
Update 8/19/18: I am still having problems. A fourth display arrived and is working, but my other monitor has now died. I will be calling tomorrow to arrange the 5th RMA for these monitors. I have lost months of productivity with the back and forth. Viewsonic's support is great, they are friendly and immediately grant the RMA, but great customer service and only make up for so much when the product is defective. Wish I could give 0 stars.

Update 6/18/19: I wanted to update this. I am waiting for the second replacement monitor to arrive I mentioned in my earlier review. This morning I went to turn on the my other monitor and it is dead. This makes the 3rd dead monitor. In case anyone is wondering if it is my house's power doing this I use a surge protector and have numerous other display panels including an Acer Monitor and TCL TV that have no problems.

Original: I purchased two of these monitors for a home office setup late last year. Several weeks after purchase, one of the monitors started having intermittent power supply issues. It finally died last month. I went through the RMA process which seemed too smooth. I expected the Viewsonic employee to ask questions and try to troubleshoot my monitor when I told him it was a power supply. Instead they RMA it immediately, which is either great customer service or they have been getting alot of calls related to power supplies. They talk about their "INDUSTRY-LEADING WARRANTY: 3-year coverage" but they require you to pay for shipping. I paid almost 90$ to ship it back, which is cheaper then a new monitor but brings my cost of ownership into the $200+ range. The process took about 3 weeks start to finish. This morning I plugged in the new monitor they shipped me. It powered on briefly then died. Another power supply. I am now faced with shipping it back or buying a new monitor. I would recommend anyone reading this buy a nicer monitor to begin with and save yourself the hassle.
Read more
12 people found this helpful.

Overall, I like these monitors. I appreciate being able to choose either DisplayPort and HDMI for the connection -- and in fact I use DP for one and HDMI for the other (because my videocard doesn't support three HDMI connections).

The picture is fine for 1080P gaming, maybe a little dark for my taste but that probably won't bother most people.

One of the monitors does have an occasional glitch, where the screen will "tear", but turning it off and back on solves that problem quickly.

I'd recommend this monitor if you're looking to do some 1080P gaming.
Read more
3 people found this helpful.

Joseph B. Huber
2.0 out of 5 starsStrange power-up issue produces sub-par display quality.
29 January 2019 - Published on Amazon.com
Style Name: 22-InchVerified Purchase
I bought two of these monitors, and they both have the same strange problem. Whenever they are powered on, or come on after going to sleep, they are in some bizarre mode where display quality ( particularly for text) is mediocre. Text (whether it is black on white or white on black) has the rainbow effect. It almost looks like the monitor is not synched properly, or some other signal conditioning is not getting applied. I am running Ubuntu 16.04 using DisplayPort, (with two different brands of cables) and have not tried any other connections. To correct the problem, I go to the menu and switch the ViewMode to a different setting (which fixes the problem), and then back to the ViewMode I want. Apparently this "wakes up" some aspect of the monitor's firmware, and the signal is properly displayed.

Once operating properly, the monitors perform as expected for the price.
Read more
5 people found this helpful.

Maverick
2.0 out of 5 starsLacking Color vibrancy and brightness
2 June 2020 - Published on Amazon.com
Style Name: 24-InchVerified Purchase
Was really disappointed when I turned it on to see really weak colors. It lacks any type of vibrancy. Typically monitors and TVs are cranked up out of the box so they stand out among others on the sales floor. This one was lame from the get go. I immediately went to the brightness setting and found the default to be maxed at 100%. That's when I knew that Viewsonic itself recognized this as a problem and shipped it brightness at 100% out of the box.

I then tried the different modes of which Game was the brightest. In addition the Color Temperature I settled on was Bluish which gave me what seemed to be the whitest white. Still not bright enough though.

Lastly it doesn't seem to completely go to sleep after my laptop is put to sleep via an HDMI connection. It keeps turning on every 3 minutes or so and displays that the source is not available. I have to click the little power button on the monitor for it to stay off. That's not going to work, those little buttons are hard to press and are typically not constructed to be turned on/off repeatedly.

Returned it and I would not recommend it.
Read more
Go to Amazon.com to see all 35 reviews 3.5 out of 5 stars
Free & fast delivery, movies and more with Amazon Prime
Prime members enjoy free & fast delivery, exclusive access to movies, TV shows, games, and more.
> Get started
Back to top
Get to Know Us
Connect with Us
Make Money with Us
Let Us Help You
© 1996-2020, Amazon.com, Inc. or its affiliates