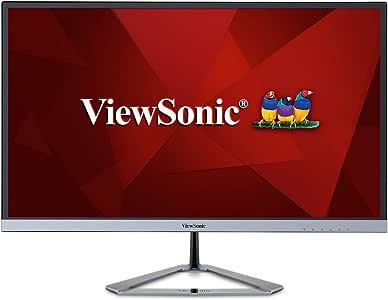 Style Name: 24" FHD 1080p Ultra Slim
Technical Details
Additional Information
Feedback
Would you like to tell us about a lower price?

CrankeeOldMan
4.0 out of 5 starsGood, with qualifications
14 April 2018 - Published on Amazon.com
Verified Purchase
This monitor replaced a 5-6 year old 23" LG. So, I wasn't exactly replacing an old relic. I would say that the image displayed on this monitor is better, but only slightly better, than the LG. And, my old LG was not an IPS panel and was connected via VGA. So, possibly the slightly better image is attributable to this being an IPS panel connected via HDMI rather than VGA. The 'documentation' for this display is totally useless. What's more, the printed out manual is only slightly more helpful. Although I've used computers for 25 years, I could simply be a somewhat stupid person. I have yet to figure out how to make the OSD do what I want it to do. Much of the commentary in the manual does not appear applicable to this display notwithstanding the fact that this is a brand new display. The six little icons on the lower right portion of the display are miniscule in size. But, most importantly, I have been unable to get them to do what I would like. A computer keyboard has up-down and right-left keys/arrows. And an ''Enter' key. It is very straightforward and easy to use. The 'controls' on this display just do not operate as
straightforwardly and simply. Again, maybe I just have yet to figure out their correct operation, but, after being a computer user for 25 years, this simply should not be an issue. Fortunately, the defaults produce a pretty decent image. Nevertheless, I would like to be able to fine tune consistent with my personal taste which I have not yet been able to do for the reasons indicated. Whatever. As mentioned, the image is definitely satisfactory. I wish my 7 1/2 year old computer/graphics card were newer so that it had a display port output, but, since it doesn't, I don't know how much improvement in image quality--if any--would result from using a DP connection. Another issue with the manual is that nowhere does it explain what some of the choices on the on screen display mean, e.g. RTS, MOBA, FRS1, FRS2. How do you know if you'd like to alter them when it's not even explained what they are??? Stuff like this definitely should be explained in a manual/userguide. Not satisfactory.
Read more
68 people found this helpful.

Marques Jones
4.0 out of 5 starsGood monitor with a just few flaws
24 July 2018 - Published on Amazon.com
Style Name: 24" FHD 1080p Ultra SlimVerified Purchase
I bought the 1080p version of this monitor. It is a great monitor with a few odd design choices I don't love.

The Good: The color is crisp and vibrant and the tiny bezel looks really great (measures somewhere around 1/4" or 1/2 cm.) I kind of wish I had bought two at the Prime Day price to seem them side by side with that small of a bezel. This thing is also very thin. I saw the product images beforehand, but in real life it's just crazy how thin the panel is.

The Bad: The silver accents are not great. I didn't think I would care, but that shiny silver strip along the bottom of the panel reflects my blue LED keyboard really brightly. Also, the power cord is non-standard. I thought I'd be able to just swap out my old monitor and plug in the previous HDMI and power cables, but this monitor has a power brick and special power cable. The stand is not able to be height adjusted, which I didn't actually expect at the price, but it is worth mentioning.

All in all, I would still buy another one of these, and am very much considering paying full the price for a second (got mine $30 off on Prime Day).

EDIT: The monitor was on sale for $20 off so I bought a second one. However, this one arrived with a shattered screen. Be aware that the shipping method is a little janky with this item. The original monitor box is inside a larger amazon box with a single piece of crumpled fill paper (that is protecting nothing). That means the outer box will likely be crushed if other items are stacked on it. Replacement was shipped for free and received 4 days later.
Read more
60 people found this helpful.

mark hepburn
5.0 out of 5 starsI'd give 10 stars if I could
21 August 2016 - Published on Amazon.com
Verified Purchase
Sorry I wrote a book here. For those of us with ADD (like me), in summary, this is an excellent monitor given the price.

For everyone who wants to read the long version :-D

I’d give it twice as many stars if I could.

I remember my first ViewSonic monitor back when I was doing graphics work in the late 90s before Windows 98. It was an 18” CRT that took up my whole desk but it was cheaper – at $1200 – than any other comparable monitor. It was a great monitor and served me very well.

I’ve had several ViewSonics since and I will admit my bias. In fact, I’m using a 24” one here at my desk as a 2nd display for my Dell all-in-one (company issue computer).

So anyway, I wanted to hook up a 2nd monitor to my MacBook at home so I could both shoot tethered and edit photos on a decent screen. I didn’t need a huge display, just an improvement over a 13” laptop display. I’m not doing professional work so having the ability to exactly calibrate isn’t important to me. I just wanted reasonably faithful color rendering, flicker free display with decent saturation and uniform display.

But when searching for an inexpensive monitor I didn’t rule out any others and kept an open mind. I ended up with this one and I’ve been very pleased with it

First things first: It comes in three pieces that you put together with no tools. Base, riser and display. It snaps together, you plug in a power cord and cable of your flavor and you’re done. It’s auto recognized in Mac and within moments you’re done. I’m primarily a windows user and my experience on that OS is far greater and I find that current versions of Win7,8, etc also have no issues with these displays. I have a mac because it was a gift and my old desktop died on me.

So for the monitor, its an IPS display and the color is excellent and the display is uniform across the entire display field. There is a faint bit of hazing at the edges but it is a) only noticeable with a very dark background color and b) it is a characteristic of IPS displays in general, not a fault.

I’m using it for remote shooting with my Canon T6 and the Canon utilities, Lightroom and Photoshop CC (which sucks, by the way and I’m moving to GIMP). Love the color, love the size and the clarity.

So, for about 15 times less than my first ViewSonic monitor, I get one that weighs nearly nothing, takes up so little space on my desk, and has a good bit more viewing area.
Read more
169 people found this helpful.
Go to Amazon.com to see all 403 reviews 4.3 out of 5 stars
Free & fast delivery, movies and more with Amazon Prime
Prime members enjoy free & fast delivery, exclusive access to movies, TV shows, games, and more.
> Get started
Back to top
Get to Know Us
Connect with Us
Make Money with Us
Let Us Help You
© 1996-2020, Amazon.com, Inc. or its affiliates