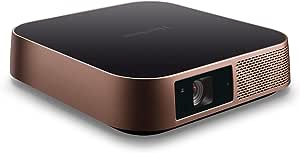 by ViewSonic
5.0 out of 5 stars 1 rating
Secure transaction
Returns Policy
Amazon Delivered
Your transaction is secure
We work hard to protect your security and privacy. Our payment security system encrypts your information during transmission. We don’t share your credit card details with third-party sellers and we don’t sell your information to others. Find out more
Amazon Delivered
Amazon directly manages delivery for this product. Order delivery tracking to your doorstep is available.
New (5) from S$1,079.99 & FREE Delivery

5.0 out of 5 stars
5 out of 5
1 global rating
How are ratings calculated?
To calculate the overall star rating and percentage breakdown by star, we do not use a simple average. Instead, our system considers things like how recent a review is and if the reviewer bought the item on Amazon. It also analyses reviews to verify trustworthiness.

There are 0 reviews and 1 rating from Singapore

Top reviews from other countries

shopper12
5.0 out of 5 stars Nice, bright, clear image for TV and movies. Good features, software could be better
Reviewed in the United Kingdom on 11 February 2021
Style: Smart portable LED projectorVerified Purchase
I had a LG PF50KS, which I loved for it's 'triple wireless' features (battery power, bluetooth audit and wifi streaming) and compact stature for my living room coffee table. After 2 years of use, the image packed up and credit to LG, they issued a full refund so I thought I'd look around for something else. I tried the Viewsonic X10 4K for a week or so, but it is just far too big for my space. I settled on the M2 and after a month of use, I'm very happy with it. It has a really great image for my relatively casual entertainment needs. Clearer, better colours and dark colour definitions and dramatically brighter than the PF50KS. It is also whisper quiet, in fact inaudible when eco mode is on. Much quieter than the PF50KS. Features are good for my needs, especially bluetooth audio out. It's good that it has the Android aptoide OS, but it is fiddly to use. Firstly I had to dig around online (including an informative review on Amazon UK) to find out that it is possible to install another app, called Aptoide, which is essentially an updated version of the onboard app store. You have to download an .apk file and install it via USB. Once installed, you open that app, and can download additional apps. Some of the apps look dodgy and there are alarming pop up advertisements that take over the screen. But the relevant media apps all seem to be there. The remote does not work with many/all of the apps, so after some more research and trial and error, I worked out that I could plug in a bluetooth mouse and run things properly with the remote in one hand and mouse in the other. Manageable, but not exactly slick. My main persisting issue is that I can't play Netflix properly. The issue is that the aspect ratio automatically adjusts to the wrong setting so that the image appears squashed in from the sides. The aspect ratio setting can be brought up with the remote, but it's very frustratingly greyed out, and thus impossible to use. Strangely enough, it only became greyed out after the onboard operating system updated itself to v0.57. Before that, the aspect ratio could be used in netflix and so the image could be correctly adjusted. I tried a complete reset, but this did not roll back the OS from v0.57 and the aspect ratio setting remains greyed out. I tried using older versions of the netflix app that can be found on the aptiode store but no joy. I called netflix and they said it was a hardware issue and they couldn't support. So only choice seems to be to stream netflix from another source over HDMI. I'm yet to get in touch with viewsonic tech support, so will see if they can help. Other than this annoyance, it's a great projector. Note, I sent the first one back as it was only possible to properly focus the top half OR the bottom half of the screen, not all of it together. The second machine is crisp and clear from corner to corner.
Read more
3 people found this helpful
Report abuse

MrGilesGG
5.0 out of 5 stars Really pleased with the M2
Reviewed in the United Kingdom on 12 June 2020
Style: Smart portable LED projectorVerified Purchase
I tried a number of projectors including Optoma 1080GTDarbee and an Epson and after much neurotic to-ing and fro-ing this was the one I've gone with. Plusses: Noticably quieter than all other projectors I tried, even the tiny Nebula Capsule. Picture quality is great for my purposes- weekly films and documentaries on a big screen. It's small and light but still well built. Downsides: the remote has no backlight, the operating system takes a while to get used to- I upgraded the Aptoid TV using the USB and a file off the internet, which allowed more all apps to be downloadable such as Mubi , BBC, VLC etc. The picture quality of the 4K bigger Viewsonic/Optoma was better, but fan noise was louder, and they were way more obtrusive in the middle of my living room- v v happy with the M2.
Read more
4 people found this helpful
Report abuse

Alex T.
1.0 out of 5 stars Save your money
Reviewed in the United Kingdom on 21 February 2021
Style: Smart portable LED projectorVerified Purchase
I got the 1080p version M2. Here is why I returned it just a few days later:

Terrible keystone correction:
The main reason I bought it was because of the horizontal keystone correction feature, as it was advertised that you can put it on the side of your couch on a coffee table and not have to use a ceiling mount. Honestly, the angle that I placed it was way smaller than what is depicted in the product description above. As you can see in the photo I attached, the frame of original projection around the adjusted image is very intense, especially in lower brightness scenes. It is evident even with some light coming through the window. In darker room conditions and scenes, it is absolutely horrendous.

Aptoide - dreadful:
"Aptoide" is basically the app store that ViewSonic have developed for these projectors. Keep in mind they all use android software, so in theory it should be fairly versatile and support many apps and their latest versions. Wrong. Only about a dozen apps are available on their store for download. Forget about Disney+, HBO-Go, or even YouTube. They have Amazon Prime Netflix, BBC iPlayer and a few other ones that I don't know anyone who uses them.

App compatibility:
As I mentioned, two of the very few apps that are available are Amazon Prime Video and Netflix. Both of these apps, however, are not only super old versions, but also the phone-tablet versions, not the ones you would find on your smart-TV. That means that simple things like the "pause/play" button on the remote don't work while watching, and the overall navigation within the apps is an absolute nightmare. They also crash every chance they get. I took me about 15 tries to log on Amazon Prime video alone.

Brightness:
Very dim. Guys and girls, seriously. It is okay in an absolutely dark room but if there is ANY hint of light coming into the room, dark scenes are impossible to view.

Overall, I have to say that it is an absolute rip-off that they are asking for so much money for a product that is so bad. It is very poorly developed from a software, interface and compatibility point of view, and the image quality is mediocre to poor.

I paid this much money because I actually considered ViewSonic to be a reputable company that makes good quality projectors, but I am seriously disappointed. I am sure those £100-150 projectors on Amazon are much better.

I don't think I had unreasonable expectations for this projector. But it does NOT do the things it is advertised as being able to do, or at best does them incredibly poorly.
Read more
One person found this helpful
Report abuse

L. Jaromin
5.0 out of 5 stars Viewsonic M2 Bit overpriced for limited in app accessibility
Reviewed in the United Kingdom on 25 October 2020
Style: Smart portable LED projectorVerified Purchase
Great picture quality, real full hd, even 4k played content looks amazing. Screen on the photo is 100”, from 2.9m distance, only the minus is, it doesn’t support google play store so YouTube as well, but streaming from iPhone is extremely easy, so no problem with limited app on the projector. However stuff downloaded from the preloaded Aptoide is not working, you have to get the Aptoide from google directly.
Most importantly the projector itself is quiet, I would say 20db which you can’t really notice.
Read more
3 people found this helpful
Report abuse

Poetic Justice
1.0 out of 5 stars Awful User Interface, Difficult to Set Up, Poor Sound
Reviewed in the United Kingdom on 12 December 2020
Style: Smart portable LED projectorVerified Purchase
Bought this projector to replace Optoma projector after the latter’s bulb died, first thing I noticed about he a view Sonic M2 out of the box is how hard it was to set up. Then the interface....honestly, the worst looking icons and controls I have ever seen - terrible. Every time you switch on the projector you have to select input ...why can’t the projector just default to last input selected?? Then there is the sound...honestly, wtf...the projector defaults to reducing the volume to a low sound when ever you switch it back on so yet again more fiddling before you can start watching anything. I registered these concerns with View Sonic 4 weeks ago and have not heard back, so I would say save your money and buy from another brand - View Sonic is rubbish.
Read more
One person found this helpful
Report abuse
See all reviews
Back to top
Get to Know Us
Connect with Us
Make Money with Us
Let Us Help You
© 1996-2021, Amazon.com, Inc. or its affiliates