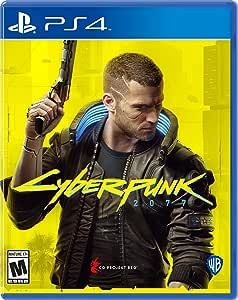 by WB Games
Platform : PlayStation 4
In stock.
S$8.99 delivery: 12 - 17 March Details
Ships from and sold by MplusL Germany, from outside Singapore. For information about products sold by international sellers, click here.

Cyberpunk 2077 is an open-world, action-adventure story set in Night City, a megalopolis obsessed with power, glamour and body modification. You play as V, a mercenary outlaw going after a one-of-a-kind implant that is the key to immortality. You can customize your character’s cyberware, skillset and playstyle, and explore a vast city where the choices you make shape the story and the world around you.

PLAY AS A MERCENARY OUTLAW

Become a cyberpunk, an urban mercenary equipped with cybernetic enhancements and build your legend on the streets of Night City.

LIVE IN THE CITY OF THE FUTURE

Enter the massive open world of Night City, a place that sets new standards in terms of visuals, complexity and depth.

Take the riskiest job of your life and go after a prototype implant that is the key to immortality.

The game comes with the following physical items:

- Art booklet featuring a selection of art from the game

- Wallpapers for desktop and mobile

Geoffrey
1.0 out of 5 stars Don't waste your money!
10 December 2020 - Published on Amazon.com
Platform For Display: PlayStation 4Edition: Standard
Do not waste your money or time purchasing this game. Graphics on PS4 look to be from a decade ago. This is pure corporate greed to sell this game to anyone. They got my $60 maybe not yours.
Read more
760 people found this helpful

Amazon Customer
1.0 out of 5 stars Do not buy this game if you do not have a PS5 or PS4 pro.
11 December 2020 - Published on Amazon.com
Platform For Display: PlayStation 4Edition: StandardVerified Purchase
I have had this game in my cart since June of 2019 and was incredibly excited to play it. However, after seeing gameplay scenes and many issue in the game on countless videos... I decided to cancel my order as it was on its way to my house. This game is unplayable in its current form on PS4. Realistically the developers should have told you the game was not designed to run on a PS4 and would have a multitude of problems.
As a caveat I have heard great things about the game from people who own PS5s and high end PCs with solid video cards. If you want to play it on a PS4 just wait a year and hopefully the developers will fix some of the bugs or buy it for PS5 then.
Incredibly disappointed in CDPR for releasing such a buggy mess.

S
1.0 out of 5 stars Seizure warning is no joke
11 December 2020 - Published on Amazon.com
Platform For Display: PlayStation 4Edition: StandardVerified Purchase
For anyone who might not be aware, apparently there’s a part of the game where it uses a light pattern almost identical to the pattern used by neurologists in hospital settings to induce seizures for diagnostic purposes. Testers have had seizures because of it. My husband, who is epileptic, has been looking forward to this game for all of 2020 so of course I preordered it, just to find out two days before the release date that its literally designed to cause seizures. I can’t believe any company could be so malicious in 2020. They’re talking about an update, but if it doesn’t happen before Christmas, I can’t give it to him.
Read more
472 people found this helpful

Kyle Toohey
1.0 out of 5 stars So about Cyberpunk...
11 December 2020 - Published on Amazon.com
Platform For Display: PlayStation 4Edition: StandardVerified Purchase
This is the best looking PS2 game on the PS4.
Read more
403 people found this helpful

Jonathan Higgins
1.0 out of 5 stars I felt bad that I'm returning this after 10 mins
10 December 2020 - Published on Amazon.com
Platform For Display: PlayStation 4Edition: StandardVerified Purchase
Uninstalled it and put it back in the case less than 15 mins in. Didn't even drive the first car. It was bar none the worst playing game I've ever experienced.

I have a base PS4 bought back when Spider-Man was bundled. Doesn't sound like a jet engine etc etc.

Not this one.
I have a PC to run this game so returning this is just going to cost me 10 mins of a drive. I'm sincerely not even relatively close to being mad.
But when a developer says "hey it's coming to PS4 and XBOX One" well before the PS5/Series X, I expect my money to be well-spent for a game advertised as such. Saying it "plays great on next gen" insinuates that it just NUDGES that cool experience up a notch. So really... felt kinda scammed on this one...
Lemme explain.

Filling it with a 30 day trial to HBO Max, stickers, a map and other stuff is great.
Making the game filled with content is great.
But if the game looks like you smeared Vaseline over a VHS copy of Bladerunner and the screen tears itself apart from even the slightest of moments at 20fps or below in the intro area (outside of the main city) and you're expecting high octane action, particle effects up the wazoo, and a bunch of numbers from hud to damage profiles to come on screen, you can really see where CDPR failed on this one. It looks nothing like the trailers and I've had low expectations and I have played some major let downs. Andromeda and Brink to name two of them and each with quite a few hours. This, was just something awful.

I just wished they said "just grab a next gen" a year ago.

Anyways refunding it. Yes, it is said we would get a PS5 license and further upgrades but honestly at this point, I genuinely think it was highly anti-consumer of them to even think of saying this would ever run on a base PS4. I felt like my preorder funded nothing of its development and I got nothing out of it.
If your game gives players motion sickness and it's not a flight sim, there's a problem.
Read more
373 people found this helpful
Go to Amazon.com to see all 1,676 reviews 2.4 out of 5 stars
Back to top
Get to Know Us
Connect with Us
Make Money with Us
Let Us Help You
© 1996-2021, Amazon.com, Inc. or its affiliates