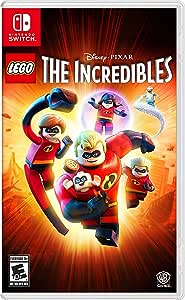 by WB Games
Platform : Nintendo Switch
Only 1 left in stock.
FREE delivery: 16 - 20 Apr. Details
Ships from and sold by SHOPITREE.

Experience the thrilling adventures of the Parr family as they conquer crime and family life through both Disney Pixar films the Incredibles and the Incredibles 2, in a LEGO world full of fun and humor. LEGO the Incredibles allows players to explore action packed story levels and an epic hub world, including Municiberg and New Urbem, as they use their unique “Super” abilities to bring the city's super villains to justice. Gamers can also team up with family and friends in 2 player Co op to assemble incredible LEGO builds. This title has been rated everyone 10 plus cartoon violence, crude humor.

Experience the thrilling adventures of the Parr family as they conquer crime and family life through both Disney-Pixar films The Incredibles and Incredibles 2, in a LEGO world full of fun and humor. LEGO The Incredibles allows players to explore action-packed story levels and an epic hub world - including Municiberg, as they use their unique 'Super' abilities to bring the city's Super Villains to justice. Gamers can also team up with family and friends in 2 player co-op to assemble incredible LEGO builds!

Kelly Hollenback
5.0 out of 5 stars Must have!
24 June 2018 - Published on Amazon.com
Platform For Display: Nintendo SwitchEdition: StandardVerified Purchase
My almost 5 year old LOVES this game!! He picked it up pretty quickly and can navigate it prettt easily. It’s cute, funny, engaging and fun! I’ve even played it for a bit. Very similar to LEGO city undercover. Open world where you can explore outside of the “superhero missions”
Read more
43 people found this helpful

Sam S.
1.0 out of 5 stars Don't waste your money
29 August 2018 - Published on Amazon.com
Platform For Display: Nintendo SwitchEdition: StandardVerified Purchase
Thought that this was going to include everything from the first movie and the second, but it starts off at the beginning of the second movie, so I was very disappointed. Also, the abilities and animations of the characters aren't very special, certainly not worth $60, especially since there aren't many of them. I literally didn't even bother playing the first level because it was so disappointing. Sold the game on eBay since I couldn't return it after I waited a month to even play it because I hadn't seen the movie yet. Don't waste your money on it, just buy Lego Marvel Superheroes 2 instead.
Read more
28 people found this helpful

Sam_I_Am
1.0 out of 5 stars No longer fun like the original Lego games
29 July 2018 - Published on Amazon.com
Platform For Display: Nintendo SwitchEdition: StandardVerified Purchase
Lego is really going down hill with their games in the last few years. They are no longer fun to play. You need to do things perfectly. They are all about timing moves and very little adventure and fun. I gave up with game after only 15 minutes as it wasn't fun. Yet I can play the original Lego Star Wars 4-6 and Indiana Jones series over and over again.
Read more
37 people found this helpful

JordanS
1.0 out of 5 stars Fun to play with kids, but crashes made us abandon playing it
18 January 2019 - Published on Amazon.com
Platform For Display: Nintendo SwitchEdition: StandardVerified Purchase
We bought this for our 5 year old at Christmas. The price was down to about $20, which is about what it's worth in the state that it's in. It's the first game I've played on the switch (or any console that I can remember) where the game crashes completely in a few places and kicks us out to the Switch's home screen.

My son and I played through a level twice, only to have the game crash in the same exact spot... which means that now we'll have to play that level a THIRD time to advance, and just hope that it doesn't crash again. WB (the game publisher) replied to our support request with info about uninstalling the game and clearing the switch's cache. We'll try those eventually, but while the game is enjoyable and easy enough for a Dad and his 5 year old to play, the crashes made us stop enjoying the game and we ultimately stopped playing.
Read more
16 people found this helpful

Steve
2.0 out of 5 stars Fun overall, but probably the laziest lego title released yet. Super glitchy.
29 December 2018 - Published on Amazon.com
Platform For Display: Nintendo SwitchEdition: StandardVerified Purchase
To start, I was a little annoyed at an entire order (this included) that was ordered via prime, but several things didn't arrive in 2 days. This game turned out to be on back order and I didn't find out until after the order was placed, when it was available, THEN it shipped in two days and arrived safe and sound in new packaging. Oh well.

I love the lego games, as they are an awesome couch co-op that I can play with my girlfriend who is a true "casual gamer" and just wants to play fun adventures with me, and not feel intimidated about her lack of gaming skill/experience. Now, before anyone start thinking, "You must not really be a fan of the Lego series because they are always glitchy." I am, and I do know. HOWEVER, having played most of their titles and owning 5 or 6 other Lego titles for my PS4 I have never experienced as many problems as with Lego Incredibles. Literally every store mode mission we've done, has errored when we were approximately 75% or further through the mission, causing the game to close and return to the switch home screen. We then have to re-open and start from the most recent checkpoint after endless loading. Did you read that? EVERY SINGLE STORY MODE MISSION THIS HAS HAPPENED TO US. That's unacceptable. I've checked for software updates, I have the most recent version of everything, nothing stops the problem. I'm legitimately pissed off about this and looking for a way to contact Traveller's Tales or whoever I can about this.

Also, the story mode comprises of about 5 missions for each movie (Incredibles 1 and 2), which just seems short and lazy compared to other titles they've put out. Some people are annoyed by starting on movie 2, idc about that. But the rest of the game is just doing mini missions (crime waves) which are boring/repetitive.

To me, the saving grace of this game, is the Pixar Family builds where you build structures that reference other great Pixar movies and you unlock cool characters like Woody, Lightning McQueen, Dory, and etc. This is a fun addition and what makes the game playable in my opinion. Overall its a fun game when not dealing with the glitching issues, but I'm glad I got it on sale. I would not be comfortable paying more than $20 for this.
Read more
14 people found this helpful
Go to Amazon.com to see all 372 reviews 4.5 out of 5 stars
Back to top
Get to Know Us
Connect with Us
Make Money with Us
Let Us Help You
© 1996-2021, Amazon.com, Inc. or its affiliates