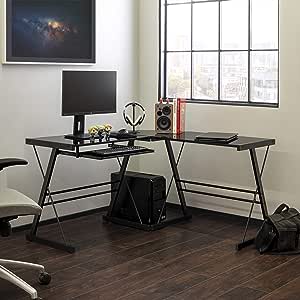 Update your home office or study with this modern and sleek corner computer desk. Crafted from durable steel with a powder-coated finish and thick, tempered safety glass. The L-shape design provides the perfect fit for space-saving needs and features a sliding keyboard tray and unattached CPU stand. Its flexible configuration allows you to mount the tray on either side of the desk according to your needs. This contemporary l-shaped office desk gives you plenty of table space to place your computer on one side, with the other side left for décor or organizing your office supplies.

Engr. Jay Mendoza
4.0 out of 5 stars Well worth the price.
5 November 2016 - Published on Amazon.com
Colour: BlackStyle Name: SorenoVerified Purchase
Four years and still nice. I got this November 2012. If you do scratch the underside of the glass, however, then you will see it on the top as well. This is because the glass itself is transparent, but the underside is layered with black paint/paper. This makes it opaque (do not confuse this black table with the  smoke  variety).

It currently supports over 100 lbs of monitors and massive vesa monitor stand (since July 2015). Cable management is a bit tricky, since this is a very "open" design (see my photos). In its life, it has been disassembled, moved across the country, and reassembled. It also supported, at a time, a 25 pound UPS and an equally heavy desktop on the left and right glass (in addition to the monitors). A 10 pound cat walks all over it too.

To view larger photos, open the review (https://www.amazon.com/review/RB0TEXACKJC9R). Hover over the image and a "bigger" image will float/pop up. Over over that "bigger" image, right-click, and select "open in new tab". There are currently 10 photos. If photos are missing, it's Amazon's fault (wait and refresh).

Dylan Conner
4.0 out of 5 stars easy to modify to suit your needs
3 March 2015 - Published on Amazon.com
Colour: BlackStyle Name: SorenoVerified Purchase
This is a great desk. It was very easy to put together and seems to be quite sturdy. As you can see with my pictures, if you have limited space, it can still work as a "L" desk. The two long pieces are completely separate and can be put together in 10 minutes each. You can simply put together the two long pieces in the area without the connecting corner piece. It is also easy to modify. The keyboard tray was too small for me, as it might be for others, so I decided to use the keyboard tray parts and make it into a monitor stand! You can use the frame of the keyboard tray and simply drill 4 holes into the corners and screw little legs on through those holes. If you want a great looking desk and easy to use and modify to suit your needs, this is the desk for that! Highly recommended
Read more

Good:
*Looks modern, sleek, and very professional
*Sturdy design despite streamlined (very thin) limbs and supports
*Plenty of clearance for my legs and shins (I'm 5' 11"). I kick the wall behind the desk before I come near the cross beams
*Supports multiple monitors and desktop computers without concern of collapsing.
*Provides a surprisingly large amount of work area.
*Glass edges are angled to prevent scraping of limbs and chipping of the glass.
*Extra of each screw in case of defects.
*Superb packing. I ordered from walmart and my girlfriend from amazon. Both boxes looked like they had been dragged behind the truck upon delivery. No damage was found when we opened what remained of the box.
*Assembly is pretty speedy. Took an hour without a drill and 20 minutes with one. Keep in mind I had already assembled one when I busted out the drill. I'd expect around a half hour for anyone with a drill reading the directions the first time through.
*Phone number and website are provided on front of assembly instructions in case anything is lost, broken, or flat out missing.

Bad:
*No built in options for cable management. Invest in some zip ties if that's a must.
*Limbs are all hollow. Saves on weight (and your back during assembly) but allows you to punch bolts through if you aren't careful.
*No options to install drawers, a hutch, or a small cupboard. It is what it is.
*You will have styrofoam everywhere when you're done, but at least your glass won't be broken.
*The keyboard tray is TINY. It fits a large wired keyboard with number pad and has about an inch of glass to spare. Your mouse and keyboard will be living separate lives from now on.
*You will at the very least need a philips head screw driver. I'm sincerely hoping that's not a deal breaker for anyone.
*Every part is conveniently labeled with a sticker. The sticker cannot be conveniently removed, especially the large square one on the keyboard glass. You may need a razor blade to remove the stickers on the glass, or cover it up with your keyboard.

Asinine:
*Glass tops are all held in place by suction cups
*Directions don't indicate you can decide which side has the keyboard. Simply swap parts 2 and 4 for part 6 during assembly.
*Directions have you build keyboard tray AFTER attaching keyboard support to desk. This means you assemble it from BENEATH the desk. Do the keyboard assembly part of step 5 and 6 immediately after step 2. You'll be glad you did.
*A drill speeds assembly up tremendously, but keep in mind the hollow limbs. I recommend drilling 95% of the way, and manually tightening with included allen wrench the remaining 5%.
*The provided PC tower holder is supposed to go under the desk. That's fine if you don't mind it sucking up all the dust, hair, and debris on your floor (yay clean floors!). The corner piece of glass can easily support a 15 lb PC tower.

We bought these desks to provide enough space on each for multiple monitors, a desktop PC, and an xbox. They delivered with a bit of space to spare.
As you can see from the picture I uploaded, you probably will want some zip ties if you're putting electronics on these desks.
Read more

uili kaveinga
5.0 out of 5 stars Easy assembly. However
11 November 2017 - Published on Amazon.com
Colour: BlackStyle Name: SorenoVerified Purchase
Easy assembly. However, DO NOT put your gaming tower on these GLASS tops. They will break and your pc will go down. Use your imagination of loss in damage vs just putting your tower either on the ground or somewhere sturdy and secure. Yes I've seen pictures of people's review here putting his or her tower in the corner section but I've also seen on Reddit broken pcs falling from glass tops breaking.

I don't know about you but I don't have a spare $1,000 usd sitting around waiting to hit the ground.

mrsceltics
5.0 out of 5 stars Battlestation material
27 March 2015 - Published on Amazon.com
Colour: BlackStyle Name: ImperialVerified Purchase
This desk was harder to bring upstairs than to build. The process is very straightforward - all you need in addition to what they provide is a screwdriver! Though the packing is great, unboxing this was very difficult. It goes to show that they want to ensure your desk comes spanking new though. There is a lot of Styrofoam, so keep that in mind before you stick a box cutter into this. The instructions are very clear cut, but do read them carefully. I was in a giant rush to build this thing, so I skimmed it and in doing so, I missed some lines noting which way the bars should face, which is crucial! It took me awhile to redo it, but still, only an hour or two and I was done, and building furniture is my absolute nightmare! I am a clumsy girl who has a ton of makeup and tools on this desk, but there have been no scratches whatsoever. The desk was exactly as I had expected. I hope to buy another and combine them with my current to make an even more awesome battlestation. I want to put my PC on the desk, but I'm not sure if it can hold the weight, for those who are wondering. I ended up playing it safe and put it under my desk. However, three monitors is surely doable! I heard about this desk from Reddit and it turns out more than five of my friends have it. Do yourself a favor and get this desk!
Read more

368 people found this helpful
Go to Amazon.com to see all 6,123 reviews 4.2 out of 5 stars
Free & fast delivery, movies and more with Amazon Prime
Prime members enjoy free & fast delivery, exclusive access to movies, TV shows, games, and more.
> Get started
Back to top
Get to Know Us
Connect with Us
Make Money with Us
Let Us Help You
© 1996-2020, Amazon.com, Inc. or its affiliates