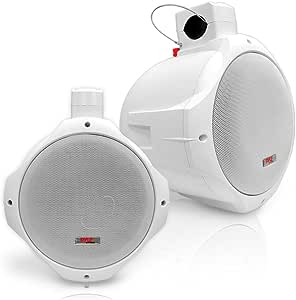 BUTYL RUBBER SURROUND: These wakeboard tower speakers have 8in subwoofers, 1.0â€ dome tweeters and butyl rubber surround for durability. Constructed with 60Hz - 20kHz frequency response for impressive bass response 300 WATT POWER: The dual 8â€ speaker system kit is designed to provide outstanding performance in terms of output power, bandwidth extension and distortion with 300 watt max power. It has 4 Ohms impedance ensuring high quality sound WATERPROOF IP-44 HOUSING: These wakeboard subwoofer speakers are built to withstand even the harshest aquatic conditions. Durable and marine grade at IP-44 to keep boat speakers water resistant MOUNTING DESIGN: The marine speaker has a bullet style design and features a sleek white finish that can be discreetly mounted anywhere you choose. Equipped with integrated mounting bracket making setup easy enough for anyone to install WEATHER RESISTANT: This 2-way audio system is weather resistant with its heavy duty engineered ABS construction. It will prevent corrosion and stain because of the impeccable layer coating. It also has a metal grill cover for protection

Jesse jones
2.0 out of 5 stars Get hmwhat you pay for
29 May 2020 - Published on Amazon.com
Verified Purchase
Worked good for a few rides, after that one speaker completely stopped working and the other barely had any sound come out...you get what you pay for , spend the extra money if you don’t want to solace your speakers very few rides.
Read more
One person found this helpful

kevlove1
1.0 out of 5 stars kevlove1
21 August 2011 - Published on Amazon.com
Verified Purchase
Bought some for my son's birthday when he put them up they looked good. Now it becomes interesting. They went out wakeboarding (second time since installing the speakers). When they went over their own wake the plastic brackets, that hold the speakers to the tower, broke. I called PYLE they said to send them in (would not accept photos). I did,to the tune of 60 some dollars. So now on top of what I spent initally, I had another 60 invested. They assured me that they had replaced the plastic brackets with metal ones. When we finally received the new ones (after numerous phone calls) guess what. . . . speakers with plastic brackets. So here I go again calling PYLE they sald they would send the aluminum brackets. We finally got them. Well actually we got one set. Had to call Pyle once again to get the second set. This took, all an all, about two months. We put them on and guess what, first time out, BAAAM they broke at the speaker base now, almost hit someone on the head, bounced off the boat, and sank. So here I go again, calling PYLE.I know everyone there by now. They pretty much said if I could send them back, once again ( for another 60 bucks) they'd see what they can do (if anything). I told them there's one on the bottom of the lake and since I dont scuba dive, I can't get it. So they pretty much said " SORRY CHARLIE". When I tried to call them back and try to work out some sort of solution to this dilemma (hell we were on a first name basis by now, thought we were friends)I was hung up on , not once , but twice. I'M out like almost 300 buck's so if anyone had any problem's like this please call me PLEASE 928-680-9556 ask for Kevin

Ducati Devil
1.0 out of 5 stars Won't take much abuse.
14 September 2015 - Published on Amazon.com
Verified Purchase
Sound OK, easy install. But... I hit a wake, good size but not crazy huge, and both housings broke at the mount. both speakers came crashing to the floor of the boat and the speaker housings shattered into pieces. Spend the money on some aluminum cans (or wear helmets if you sit under them!).
Read more
One person found this helpful

greg w wheeler
1.0 out of 5 stars Low quality speakers and no warranty service.
3 June 2019 - Published on Amazon.com
Verified Purchase
Installed speakers and the grilles fell off falling in lake. Seller would not let me return and pyle did not have covers in stock they said. Sound is not that great. Do not buy.
Read more