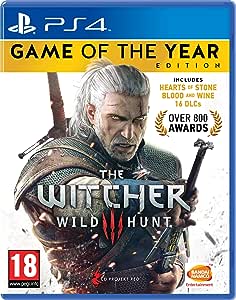 The Witcher 3 Game of the Year Edition (PS4)

by BANDAI NAMCO Entertainment
Platform : PlayStation 4
4.8 out of 5 stars 196 ratings
Only 5 left in stock.
Ships from and sold by FASTTSHOP, from outside Singapore. For information about products sold by international sellers, click here.
Show More
9 new from S$67.51

The Witcher 3: Wild Hunt Game of the Year edition brings together the base game and all the additional content released to date.Includes the Hearts of Stone and Blood & Wine expansions, which offer a massive 50 hours of additional storytelling as well as new features and new areas that expand the explorable world by over a third!Affords access to all additional content released so far, including weapons, armor, side quests, game modes and new GWENT cards!Features all technical and visual updates as well as a new user interface completely redesigned on the basis of feedback from members of the Witcher Community.

J.D.
5.0 out of 5 starsGreat game!!
20 May 2019 - Published on Amazon.com
Verified Purchase
It is not region locked. If you own The Witcher 3, your saves are not playable on this disc, you'll have to start the game over. It is well worth getting the GOTY Edition, it is an amazing game!
Read more
13 people found this helpful.

Alex
5.0 out of 5 starsMasterpiece! If you have issues with finding a specific language pack, then this review is for you.
15 February 2020 - Published on Amazon.com
Verified Purchase
Game is amazing (You all know that this game is amazing, come on) delivery was fast and I had no issues at all.

If someone have issue with language packs and PSN region locks, then this review is for you.

As a person who lives in US and who speak Russian, sometimes trying to find a game with your native language is a big pain, because of Sony stupid policies and region locks. (Same with Skyrim creation club and mods, cross-play etc.)

Let me explain. I got Complete Edition on PSN during Days of Play 2018 for 14$, Complete Edition have same content as a Game of the year edition, however, CE does not have a Russian language on it, not even text was translated. GOTY was released in Europe and CE for North America, as I understand.

I have my old Russian PSN account that I use mainly on PS3 and I though that I can download a language pack from there for CE but after my system download it, it would not install it.

(Because it’s have to be specifically for CE or GOTY, Russian PSN have language pack only for regular version. Same with the saves file, if you played Witcher 3 on regular version and decided to get GOTY or CE to play with all DLC’s, oh sorry but you have to start a new game)

Russian PSN does not have GOTY language packs because it was not released there.

I realized that I have to get Game of the Year edition which was released for Europe. I had CE Witcher 3, but I never played it due to English text and translation

(Don’t get me wrong, English as a original localization is amazing and probably the best LORE representation of Gerald. Gerald there is more calm then in Russian where he yells SYKA BLYAT, but I guess I was just nostalgic and wanted to have something closer to the heart, especially Witcher game)

I played the first 2 games on pc with Russian translation. I am a big fan of original books written by Andrey Sapkowski, which I read in Russian.

SO, I got GOTY. Text in game was In Russian on my NA PSN account. But NO RUSSIAN localization, no CYKA and no BLYAT!!!

I remembered my Gran-Granpa, that was eating Nazi’s on breakfast during WWII and his words when I was a kid, playing chess with him:
- “Never surrender, kid, persistence pays off.”

So I just checked in Google, Russian language pack GOTY and one of the search results PSN pages was at EN-HU domain, HU stands for Hungary. So, I created an additional PSN account on the system and chose Hungary as a country of origin. I went to PS store and found GOTY edition of Witcher 3 and under the adds-on tab I finally saw what I was looking for... Russian language pack, GOTY edition.

I opened a bottle of very expensive Vodka that I was keeping for some very important reasons and celebrations in my life, I cut a big piece of great stake for my home bear pet, he got so happy that he started to ride his unicycle around the house and playing balalaika.

Right now I can finally enjoy Witcher 3 on PS4 at my Native language with Russian text and speach on my NA account, which is main.

(Keep in mind that you have to keep additional account from which you downloaded a language pack on your PS4 system, but you don’t have to play on it, or even logging there ever again, just keep it on a system. You can play Witcher on your main account and enjoy region locked content, which in this case is a language pack. Same with DLC’s and other content for other games)

Off-course, you can say that I could just go to torrents and download this game with any language I need, no issues on my PC for absolutely free.

if I do that, we might not see another games from CD project Red, this is one of the studios that deserves our money and our respect for their hard work. Pirating their games is like harming a little puppy, which is not cool and might get you killed by Baba Yaga;) (Boogeyman)

I hope you found my review helpful:)

Ashley Walden
5.0 out of 5 starsOpen world and fully your choice!
26 February 2020 - Published on Amazon.com
Verified Purchase
I’ve never played any of the Witcher games before and am a big fan of Elder Scrolls: Skyrim and Far Cry, after beating those games and getting bored of the never ending mini side missions, I’ve been in need of a new game. The Witcher has beat all my expectations! I love open world games and the story line is amazing! The most similar to the Skyrim style open world I’ve found and am hooked completely!
Read more
3 people found this helpful.

Abi Normal
3.0 out of 5 starsThis Version Has More Bugs Than the Original Version.
15 February 2020 - Published on Amazon.com
Verified Purchase
The game is massive. It's an open world RPG and you can pretty much go and do what you like. The different fighting combos makes things interesting and learning what mobs are weak to what is extremely helpful. The main storyline is engaging.

I played this game when it first came out without the DLCs. I don't remember it being as buggy as this version. I've had spoken dialogue cut out on me during quests. The game has crashed on me a couple of times after cutscenes. And the loading time is painfully slow. I would have expected the game to play smoother after being out a while but this doesn't appear to be the case. It's a great game but prepare to be frustrated by the bugs they didn't fix.
Read more
One person found this helpful.

Ahmed
5.0 out of 5 starsGame Of The Year.
30 September 2019 - Published on Amazon.com
Verified Purchase
Simply the greatest game I've ever played period.
Read more
4 people found this helpful.
Go to Amazon.com to see all 39 reviews 4.6 out of 5 stars
Free & fast delivery, movies and more with Amazon Prime
Prime members enjoy free & fast delivery, exclusive access to movies, TV shows, games, and more.
> Get started
Back to top
Get to Know Us
Connect with Us
Make Money with Us
Let Us Help You
© 1996-2020, Amazon.com, Inc. or its affiliates