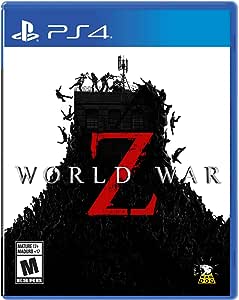 Add to Cart
S$123.77
+ FREE Delivery
Sold by: PureBrilliant
Have one to sell?
Sell on Amazon

Fastest delivery: 25 - 29 July Details
Ships from and sold by E-SPECIALLITY, from outside Singapore. For information about products sold by international sellers, click here.
2 new from S$123.77

Chris94
5.0 out of 5 starsJust think of it as left4dead 3
17 April 2019 - Published on Amazon.com
Platform For Display: PlayStation 4Verified Purchase
Overall World War Z is very ambitious game. Very ambitious at being Left 4 Dead 3. That being said it is by far the best l4d clone that I’ve played so far on consoles.

The “storyline” is exactly the same as l4d. 4 episodes, with 3 or so chapters in each episode.
In each chapter you are forced to get from point A to point B, by doing task like setting defenses, finding keys, protecting things for a certain amount of time, then at the end of the last chapter just like in left 4 dead you have to hold out until rescue comes as waves attack. If you’re looking for a story, you really won’t get one.

Neither my friend or I liked the Moscow missions at all, they were stupidly set up, and the final chapter in Tokyo was such a letdown and anticlimactic.

I was very surprised to how much guns and classes are in the game.

You get to pick from 6 class, which all have an extensive skill tree to unlock. These classes give you your starting weapons, and special ability. These abilities range from grenades, Molotov’s, healing stem guns to explosive ammo for the team. I haven’t looked much into the skill trees, but they give abilities like fasting healing, more damage after a certain amount of kills, hold more ammo, etc. there’s a good 20+ per class, all different.

You also unlock different variants of guns as you use them and get kills with them. These variants change the appearance, sights, magazine size, sway speed, silencers, damage + more. There’s probably about 15-20 guns in the game, and they all feel different!

The special zombies are all imports from l4d as well. I honestly don’t know the name of any of them, as my friend and I just yell hunter or charger anytime we them. Theses one that jumps on you and scratches you(hunter), charges at you and pounds you(charger), screams and alerts the horde(witch), makes your screen all foggy and damages you(mix of spitter+smoker).
None are that good, nor that powerful. Upset there’s no bosses like a Tank.

Graphics are top notch! Gore and zombies look absolutely incredible, and seeing the zombie hordes charging at you and climbing up walls is absolutely terrifying. We’re not talking 10-20 zombies, were talking 100-200+ charging at any given time.

There’s also a multiplayer mode as well. I only played a few matches and I thought it was trash. 4vs4 with zombies roaming the map, and a horde coming every few minutes. The modes are typical domination, death match, king of the hill, etc.
Players seemed to be a tad laggy, and once you pick your class at the start you can’t change it again.

Main issues I have.
No private matches. My friend and I don’t want to play with two ranbobs, we’d rather just play with AI.
No vote to kick.
While the swarm of hundreds of zombies looks cool, they aren’t very effective. When they come you have mini guns, mortars andher traps to kill them all.
Special zombies are too weak. Needed another 1 or 2 in the game.

Overall I am very impressed with this game. I was a big fan of l4d growing up and bought both on release date, and to me this is the perfect game for fans of it on the next generation. For $39 this game is a steal, there just so much to it that should keep you, with replay ability to the missions.

msr
2.0 out of 5 starsRather beat Days Gone?
19 April 2019 - Published on Amazon.com
Platform For Display: PlayStation 4Verified Purchase
MadDog rather release early to beat Days Gone than releasing a playable game? Talk about customer care. What's the point of buying a game on release day if you have to wait for bug fixes to be able to play it?
Read more
23 people found this helpful.

Nick
2.0 out of 5 starsIf you were hoping to play a new installment of Left 4 Dead, this isn't it.
4 May 2019 - Published on Amazon.com
Platform For Display: PlayStation 4Verified Purchase
This game has a lot of problems with online connectivity, and if you want to play with friends the ONLY option is online. You will get randomly disconnected from games at the beginning of a match, midway through a match, and even at the very end of the match when you play online. This means you lose ALL progress you've made. (You gain XP and level up your characters and weapons in this game) This is after the patch 1.03 that supposedly addressed many of those connection issues.

Another negative aspect is the design of co-op gameplay. If you choose to play online, you do not get to choose where you start in the level. It will often force you to join another player/group of players who have already made progress in the level. This means even if you've never played the level you might start a game two thirds done.

Finally, you have no say in whether another person joins you, if you play online, even if you have a full group. This is further complicated by the fact that people are often disconnected from the game, so if you and your friend are playing together, and they get disconnected, you will find that their slot is very quickly filled with a random person and you no longer can play with your friend. Plus, they lost all of their xp progress, so if you are trying to stay at a the same level as your group, good luck.

Finally, the game is too short. There isn't as much content as either Left 4 Dead, even if you count the leveling grind designed around the difficulty options.
Read more
14 people found this helpful.

JAX
5.0 out of 5 starsWWZ PS4 Game Is Awesome 👍🧟
17 April 2019 - Published on Amazon.com
Platform For Display: PlayStation 4Verified Purchase
Awesome Zombie Game, you can play online with other players or offline. Great Graphics and Weapon Mechanics. My Son and I Love Zombie Games......Can't wait for Days Gone PS4....👍😍🤩🧟🎮
Read more
15 people found this helpful.

Matthew Pena
1.0 out of 5 starsNo local four player, you have to play online with random people or friends!
23 April 2019 - Published on Amazon.com
Platform For Display: PlayStation 4Verified Purchase
CRASH CRASH CRASH Game crashes about every episode, no local four player, you can only play online with random people or friends. Playing solo is horrible most in part because of the three AI character's. Game would be ten times better if you could connect four controllers and play on that one console. I was hopeing to play with my three kids but nope major disappointment, should of saved my money. It will probably be on sale next week so wait for the sale.
Read more
12 people found this helpful.
Go to Amazon.com to see all 136 reviews 4.1 out of 5 stars
Free & fast delivery, movies and more with Amazon Prime
Prime members enjoy free & fast delivery, exclusive access to movies, TV shows, games, and more.
> Get started
Back to top
Get to Know Us
Connect with Us
Make Money with Us
Let Us Help You
© 1996-2020, Amazon.com, Inc. or its affiliates