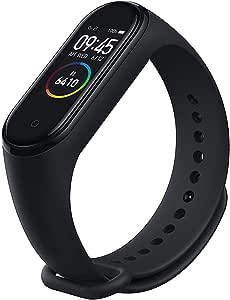 by Xiaomi
4.6 out of 5 stars 3 ratings
Currently unavailable.
We don't know when or if this item will be back in stock.

4.6 out of 5 stars
4.6 out of 5
3 customer ratings
How are ratings calculated?
To calculate the overall star rating and percentage breakdown by star, we do not use a simple average. Instead, our system considers things like how recent a review is and if the reviewer bought the item on Amazon. It also analyses reviews to verify trustworthiness.

Ramala
5.0 out of 5 stars Good product, excellent service
14 June 2020
Verified Purchase
I bought for my kids age 5, 7 and 10. They loved it. Delivery was on time.
Read more
Helpful
Report abuse

Shannon Hacker
5.0 out of 5 stars Functional and affordable (Updated Review)
16 November 2019 - Published on Amazon.com
Verified Purchase
So far I am very pleased with this device, its functionality, and the battery life. Originally, I was having issues with this working with my Xiaomi Redmi Note 7. However, I figured out what I was doing wrong and since then, this has worked flawlessly. I have had it for seven days now and the battery is still at 84% (that is with the heart rate monitor engaged). The display is very clear and the colors are vibrant (brightness is adjustable). This device will track your sleep, steps, movement, and heart rate. It will also display the time, the weather, and text/email/app notifications.

You will need to use this with the Mi Fit app which can be obtained for free from the Mi store or Google Play Store. The app allows you to customize what is displayed on the watch (notifications, weather, heart rate, etc.). Unlike many other devices that I have seen on the market, the Mi Band 4 allows you to upload custom watch faces and the app has several to choose from. You can also upload your own photos to the band if you want.

The watch is very light and comfortable - I honestly do not even realize that I have it on my wrist. The vibration on it is just enough that I realize I have a notification, but not so strong that it's uncomfortable. The range for the devices Bluetooth seems to be exceptional in my opinion. I can leave my phone in the back of my house and still receive notifications on the opposite side of my house. I work in a school and have found that it works just as well. I can leave my phone in my classroom and still receive notifications a fair distance away from my classroom (like down the hall, etc.). One thing I will note is that when I first tried using this, I thought it wasn't working right with my phone. However, I realized that the place I normally keep my phone was blocking the Bluetooth and that was why it wasn't working.

Overall, you cannot go wrong with this thing for the money. This does everything that more expensive devices do for a fraction of the cost and I'm a fan of Xiaomi products in the first place.
Read more
14 people found this helpful

manVaCamp2000
2.0 out of 5 stars Disappointing for swimming and mountian biking
17 November 2019 - Published on Amazon.com
Verified Purchase
My old pebble watch got to the point where it was no longer waterproof so I decided it was time to replace it. I was really hesitant to spend big bucks for a smart watch, and not being an apple fan boy, I looked at the under $100 options on Amazon that would give me some of the smart watch features that I had come to like on the pebble but also aid in my exercise tracking.

I have two thing I do for exercise.. mountian biking and swimming. My hope was this watch would track and integrate with Google fit or the app I had been using for all that, Endmodo. Sadly, it does none of the above, and even fails to track well within the mi app.

First let me talk about the mountian biking experience. In the first attempt with it, I was not watching it closely (it's mountian biking.. I have a lot of things to keep track of, the watch really has to take care of itself), and it turned off with a casual brush of my arm and all the data from that ride was lost. Having had this experience, the second ride went a little better as I was listening and the app notified me that the "workout paused" and was able to keep it going. However, the mi app GPS smoothing is horrible, and at my halfway point in my usual 9 mile ride, the mi voice was informing me I had ridden 12 miles! Note the Endmodo mile voice almost always let's me know the miles at pretty much the same locations o the trails and it matches up nicely with the trails' published distances. Both methods rely on the same GPS from the phone, so it's got to be the GPS smoothing in the MI app that is defective. No worries though.. I can count on the Endmodo app for mountain biking, but it would have been nice to get the heartbeat data integrated with my distance.. Anyway, I had high hopes for the swimming part of the app.

I do distance swimming in the pool with an eye on preparation for doing open water swims in the summer. My normal workout is anywhere between 1.5 miles to 3 right now, with a goal of working up to 4 miles. For the uninitiated, that's over 100 laps or up to 2+ hours of steady swimming. I normally count my laps by 10s in my head, but its easy to get lost in doing that and either under or over swimming. The point of the watch was to know by how much and tune appropriately.

As with the mountian biking the first trial was a bust. Wet hands and the watch face does not make selection of the activity and pool length easy. I had trouble seeing the tiny icons and actually failed to start the swim app.

Second try: I dried my hands, and having learned the interface now, I started the app. For swimming, the designers have a lock built in to try to minimize the chance of triggering a stop in the workout from the water flow, which was moderately effective. I even was able to pause the app for a pee break! When I got out of the pool, and downloaded the data to my phone, the distances were very close to what I estimated from my head lap count, with lots is data on my stroke count. The third try was similar, but the lock failed and the app exited half way through the workout. The fourth go everything seemed to work and I terminated the workout correctly, but when I went to look at the workout the next day it was no where to be found in the Pp! Argh! A fitness tracker that only occasionally properly tracks your workouts is really kinda useless.

On top of all that, I have little or no faith in the calculated calorie counts the app generates. They tend to be about a tenth of the counts I get from Endmodo and Google fit, which seem to track pretty closely. The MI app is simply horrible as navigation to the information that counts - workouts, is difficult and frustrating. It inconsistently pushes data to Google fit, then the data it does push only includes steps (which I could care less about).

All in all, this is not a real fitness tracking device for what I do. I'm frankly not sure one exist for what I do for less than $100 since ATM 5 devices are not that cheap. Im probably going to try one of the Garmin devices as they seem to do what I want.
Read more
10 people found this helpful

bobsav
5.0 out of 5 stars It works!!
17 December 2019 - Published on Amazon.com
Verified Purchase
I normally wait awhile to review my latest gadget but here I am jumping in with my 2 cents after only 10 days or so. I got this watch mainly because it is very inexpensive and claims to be waterproofish. It is. I am in a swimming pool for a couple of hours a week and the Mi Band 4 joined me without any complaints. It keeps time, connects with my (nearby) phone to let me know someone wants to reach me, tracks my steps, checks whether I am sleeping deeply or not, counts my steps, times my workouts (or could if I did), and lots more. The battery appears to be on track to last a few weeks, maybe a bit more. I have to say, I don't expect a sub 50 dollar watch to be perfectly accurate in step counting, heart rate, etc., maybe it is, but knowing whether my pulse is 65 or 90 is worth the investment. It really has a lot of features for such a small and inexpensive device. Charging is interesting. To charge the battery the watch must be removed from the strap and then placed on this cradle attached to a short USB cord. If you have a USB 5 volt charger lying around or a computer your good to go. Remember, the watch only needs to be charged every few weeks. It has a tiny display but is very legible. Go treat yourself.
Read more
8 people found this helpful
Go to Amazon.com to see all 171 reviews 4.3 out of 5 stars
Back to top
Get to Know Us
Connect with Us
Make Money with Us
Let Us Help You
© 1996-2021, Amazon.com, Inc. or its affiliates