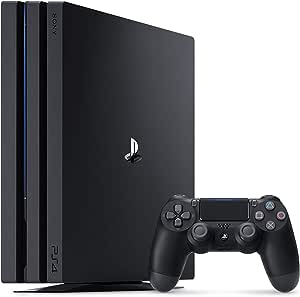 by Sony
Platform : PlayStation 4
Only 3 left in stock (more on the way).
Ships from and sold by Amazon SG.

PS4 Pro is a high-end version of PS4 that is capable of outputting 4K graphics, HDR support, smoother and more stable frame rates and 4K video streaming. PS4 Pro outputs gameplay to your 4K TV. Many games, like Call of Duty®: Black Ops 4, Gran Turismo Sport, and more, are optimised to look stunningly sharp and detailed when played on a 4K TV with PS4 Pro. Turn on Boost Mode to give PS4 games access to the increased power of PS4 Pro. For HD TV Enhanced games, players can benefit from increased image clarity, faster frame rates, or more. With an HDR TV, compatible PS4 games display an unbelievably vibrant and lifelike range of colours. Stream 4K videos, movies, and shows to your PS4 Pro. PS4 Pro outputs an enhanced HD resolution. PS4 Pro utilizes enhanced resolution techniques to increase game resolution to approach 4K. PS4 Pro enables game resolution output at native 2160p resolution. Improved visibility of objects further in the background with greater focus and more detail. Images with soft features such as rounded corners and faces appear smoother and more visually realistic. Visuals with very small features like smoke and steam have a heavier look and realistic feel. PS4 Pro enables more elaborate design of the images that create the detail we see in games, like dirt on clothing or rust on metal. PS4 Pro enables sharper shadows with cleaner detail at a greater distance, creating depth and image context. PS4 Pro displays imagery that is more intricate, increasing the amount of images on screen at once. HDR balances the light in games, coming closer to the full spectrum of light we see with the human eye. Boost Mode unlocks more power for select PS4 games. Depending on the game, the increased processing speeds can result in shorter load times and faster and smoother frame rates.