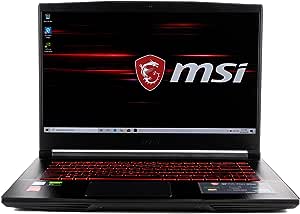 by Computer Upgrade King
4.4 out of 5 stars 55 ratings
Currently unavailable.
We don't know when or if this item will be back in stock.

Computer Upgrade King sells computers with upgraded configurations. If the computer has modifications (listed above), then the manufacturer box is opened for it to be tested and inspected and to install the upgrades to achieve the specifications as advertised. If no modifications are listed, the item is unopened and untested. Defects & blemishes are significantly reduced by our in depth inspection & testing.

Amazon Customer
5.0 out of 5 starsGreat sound, overall a good deal
23 April 2019 - Published on Amazon.com
Verified Purchase
CUK is giving a good deal on this laptop. I bought it for Machine Learning stuff ... havent tried games .... Also you might see the battery not going beyond 90%. To avoid that you need Battery Calibration in Start menu .. which will calibrate battery.

CONS:
I wish the trackpad were not metallic. Finger slips making double click unless used with buttons which i dont ... maybe it will take some time being used to
Didnt like that Home and END button can be used only when Fn key is pressed. To tackle that i installed key mapping software and swapped Insert Delete with Home and End. Who uses Insert anyway ?

Overall, satisfied with the purchase and i hope it doesnt show any problems.

just bought this
5.0 out of 5 starsBetter hardware at a better price
3 December 2019 - Published on Amazon.com
Verified Purchase
Two weeks in, and everything is great so far! Specs delivered as described in the product listing, and it even arrived earlier than expected.

Computer Upgrade King (CUK) upgrades the standard hardware, so, yes, the laptop was removed from the box. However everything was put back together so perfectly, I couldn't even tell that the seal on the box had been broken. There are stickers/paper notices scattered throughout the box explaining that they had upgraded the hardware.

**week seven update**
Still runnin like a champ! I often have a VM eating up four cores and 24GB ram, a Google Pixel 3 emulator running, a hundred or two tabs open across Chrome and Firefox, and the laptop just turns the fan on a bit. No problem!

I only have a few complaints so far, but they're not huge issues. First, the speakers are pretty tinny, but i usually use my headphones anyway, so it's a total non issue for me). Second, the rubber pads on the bottom aren't very grippy, so the laptop tends to slide a bit if i put it on the concrete counters. Third, the track pad is kinda finnicky, and there's this dumb gesture hotkey thing hidden in some program that changes profiles or some such thing, and it has an annoying pop up that tells you so. Just a nuissance, because i frequently find myself accidentally making this dang gesture when all I'll trying to do is scroll! Fourth, the numpad keys are pretty narrow, and I occasionally find myself fat fingering in the wrong numbers. Fifth and final, I'm still not super excited about the heft of the case. I doubt I'll actually break it, but I'm still super paranoid when I pick it up and move it. M
With my fancy work XPS 15, I give no second thought to grabbing it by a corner with one hand, and swinging it along my side as I walk, or opening the screen by one corner. With this MSI, I always pick it up by the back corner along the pads, or one hand on each side. Opening the screen is purely a top center lift, as it flexes far too much for the comfort of a corner open.

sarah2012
5.0 out of 5 starsGreat Gaming Laptop
19 July 2018 - Published on Amazon.com
Verified PurchaseEarly Reviewer Rewards(What's this?)
This laptop works great. It can keep up with the high graphics demand of modern games like Far Cry 5 and Civilization VI while still being half the weight of my husband’s gaming laptop, he’s jealous, but I let him use it on occasion too don’t worry :) My only caution for those looking to buy it is that you’ll also want to use a cooling pad with it because it gets very warm after about 15 min of playing modern games.
Read more
82 people found this helpful.

TwoLeftFeet
5.0 out of 5 starsGreat laptop! Love it!
7 November 2019 - Published on Amazon.com
Verified Purchase
Great laptop! Very fast, great graphics, and lots of storage. Screen is very crisp, and the sound card is fantastic! Everything I wanted! I wish there were more hours in the day to enjoy it more! The IT guy that hooked up my internet was glassy-eyed over it.
Read more
48 people found this helpful.
Go to Amazon.com to see all 43 reviews 4.4 out of 5 stars
Free & fast delivery, movies and more with Amazon Prime
Prime members enjoy free & fast delivery, exclusive access to movies, TV shows, games, and more.
> Get started
Back to top
Get to Know Us
Connect with Us
Make Money with Us
Let Us Help You
© 1996-2020, Amazon.com, Inc. or its affiliates