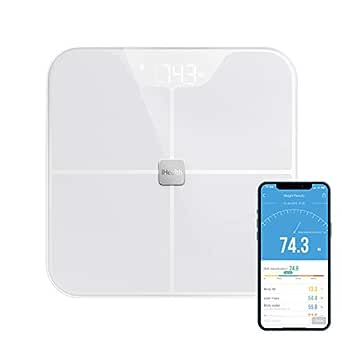 Just step on this advanced smart scale to get 9 Precise data points with instant feedback to know yourself better.

High-sensitivity sensors built-in, advanced independent developed BIA (bioelectric impedance analysis) algorithm and an ITO coating are layered on the surface of Smart Scale, all for ensuring precise measurements every time you step on.

The large LED screen of high brightness allows you to measure no matter day or at night and get a clear reading at any angle.

D Parish
4.0 out of 5 stars Just what the doctor ordered!
16 April 2020 - Published on Amazon.com
Verified Purchase
MAXIMUM WEIGHT LIMIT IS 400 Lbs (180KG), it sends data, INCLUDING YOIUR WEIGHT, to your iHealth App, within seconds of getting BAREFOOT on the device. Additional data sent/stored in your app are your; body fat, BMI, body water, lean mass, Visceral Fat Rating, muscle mass, bone mass, and Daily Calorie Intake. So far works great, the bad news is that it is made in China - the good news?, at least you don't put it in your mouth.
I have the iHealth Nexus scale and the iHealth Wellness Blood Pressure Monitor (BP3L), which also works great and automatically sends the results, through my phone & app to my local hospital where my BP is always being monitored by specialists to regulate my BP meds.
The BP Monitor (BP3L) is worthless without the free iHealth App app as the BP3L displays all data in the app, so the app is required, (no sense acquiring the iHealth BP3 Blood Pressure Monitor, without the app, might as well get an analog device as the BP3L will not work without the app).
The IHealth Nexus scale also connects to the phone/app via Bluetooth to store readings/data and send that data (if you so desire) to a remote location, yet the Nexus scale displays its aforementioned readings/data on the scale itself on a digital display.
I iHealth APP also records; Activity & Sleep, Pulse Ox, and Thermometer Readings, when wirelessly connected (Bluetooth) to an appropriate device. I think, (am not sure) the device may work with apps such as iPhone Health APP(?).
This is an excellent workhorse package for use with telemedicine or other remote applications involving the new wave of medical off-site- doctor visits/exams. With that said, even though my hospital has been using this iHealth system to monitor certain medical aspects of my health, the hospital is suggesting a different set-up (brand) for telemedicine, so to get the most out of any medical device that connects wirelessly (Bluetooth), with the ability to forward the information via APP as a result of, or as a pre-requisite of, or during a tel-conference, tele-office visit/exam, or via the internet, I'd suggest consulting with your medical provider or hospital, as each doctor, medical provider, etc., may elect different devices, apps, brands, operating systems, etc. to transfer this data.
Oh ... 4 stars because it is made in China, if it were American made (and I'd pay a lil more for that luxury) it would be 5 stars
Read more
9 people found this helpful

Cousin Brucie
2.0 out of 5 stars iHealth Labs app clumsy for the scale
24 August 2020 - Published on Amazon.com
Verified Purchase
For the sake of consistency, I purchased the iHealth scale, blood pressure wrist cuff, and pulse oximeter together. My hope was that I could use a single app and have all my information logged into the Apple Health Kit.

I was surprised to find that each of these devices were so different from each other. It’s like they are made by separate companies and just packaged up by iHealth Labs. Although the packaging is quite nice.

- [ ] First major difference; power. The scale uses 4 ‘AAA’ batteries. Ok, batteries can be expected in a bathroom type scale. The blood pressure cuff is rechargeable but uses the USB mini Type B cord, while the pulse oximeter uses a USB micro Type B power cord. Not a super big deal, but I now four different charging cords plugged in for iPhone, Apple Watch, Pulse-Ox and BP Cuff.
- [ ] Next is application iHealth Labs, iHealth.
- [ ] I’ll start with the Pulse Oximeter since this is the closest to being a pretty good interface. If the iHealth app from iHealth Labs is open, it will automatically connect to the Pulse-Ox (weather you’re using it or not). All you have to do is put it on your finger and press the button. The app will switch to the Pulse-Ox screen and show you’re data in real time as it’s being recorded. Pull it off you finger and you’re done. Data saved and imported into Health Kit. Very nice.
- [ ] The scale works well, but intuition is very lacking. Step on the scale and get your weight and BMI in seconds. There is no indication that the information was saved or transferred to the app. Having switched from the FitBit scale, I was used to it showing me that the data transfer was successful and that it was saved under the appropriate user profile. Now you have to open the iHealth app. Check if the weight is there - nope. Go into the weight results section of the app, not yet. Select the measure tab. Once a Bluetooth connection is established, it will say ‘Stand on scale with your bare feet’ with nice picture to show you how. But if you were real quick, you would have seen the screen flicker. That was the download. To verify, switch to the List tab and now you will see your latest weigh-in. Since I don’t carry my phone into the bathroom with me each morning when I step on the scale - I wonder if that weigh-in will count.
- [ ] Last, the ‘iHealth Wireless Blood Pressure wrist monitor’. This one defines what it means to jump through hoops to get a reading. Here’s the process; Put it your wrist (they state it has to be the left, but i found either get the same reading). Tap the ‘Start/Stop’ button to turn it on, if it’s not already on (if you touch the inside of the cuff in just the right way, it will turn itself on). Now position your arm to get it at heart level. Nice little indicators to get you there. Now you have to hit the ‘Start/Stop’ button (again) and the pump starts up (problem? The lights to help guide your positioning will go out). When it’s done, it displays your results. But, to get them into the app, open the app, switch to the blood pressure section and select the ‘Measure’ tab. (Almost there...). Now, turn the wrist cuff off ‘Start/Stop’ button. When it’s off, press and hold the ‘Start/Stop’ button for two seconds which will now turn on the cuff’s Bluetooth. The app will show connecting while waiting for the cuff to be detected. Now the app shows a big blue circle with the word SYNC in the middle. This is a button you have to tap to get it to sync, it just doesn’t look like a button requiring action. Your BP is now available - last step, tap the ‘Save’ bar.

Now you have all you history in one place - Apple Health Kit for you iPhone users. The only quirk I had to work through, was for each metric (SpO2, BP, Wgt, etc) you need to make sure the app supplying the info has priority. In this case, in Health go to the ‘sources’ and make sure iHealth is on the top of the list and has write permissions.

Personally I would like to see iHealth labs have their developers for the scale and the BP cuff get together with the ones who did the Pulse-Ox and come up with a common interaction and interface. Like, open the app and connect to all designated devices. If the device is ‘on’ then start reading data and let user know you’re doing that. When the readings are complete, save them! And export it to another app like Health Kit if it has been setup to do that. If they did all that, they would five stars from me on each of these devices.
Read more
5 people found this helpful

Jonathan
1.0 out of 5 stars Measurements aren't accurate
23 July 2020 - Published on Amazon.com
Verified Purchase
The body fat percentage has not changed since I bought it 2 and a half months ago. I'm a fairly active person who coaches/teaches and works out several times a week and thought it was off when I first tried it but wasn't sure. I'm on my feet A LOT. After these past couple of months and the fact that the readings haven't changed at all, I am convinced that the measurements are severely error ridden.
Read more
4 people found this helpful

lamgini24
1.0 out of 5 stars SCAM: SCALE DOES NOT GIVE ACCURATE READINGS
8 June 2020 - Published on Amazon.com
Verified Purchase
Piece of garbage!! This scale is only good for telling your weight. All the other calculations are false and completely inaccurate giving measurements of a person who could not be alive. NO CUSTOMER SERVICE OR SUPPORT! Wasted $80, refusing return even though it’s defective. Buy another scale.

UPDATE: Still no response from the company, avoid their products, they are a scam.

Update: They finally sent me a replacement and having the same issues. Bought another scale from another company and it works perfect. Don’t waste your money.
Read more
One person found this helpful

RJB101
1.0 out of 5 stars Dead after 8 months
1 January 2021 - Published on Amazon.com
Verified Purchase
Had to change the batteries after 8 months, now it just flashes random weights on the display even when no one is touching it. No mention of this product anywhere on their website
Read more
One person found this helpful
Go to Amazon.com to see all 17 reviews 3.4 out of 5 stars
Back to top
Get to Know Us
Connect with Us
Make Money with Us
Let Us Help You
© 1996-2021, Amazon.com, Inc. or its affiliates